‘Death Wish’ Never Quite Lives Up to Its Name (FILM REVIEW)

In a post-John Wick world, Death Wish feels almost quaint. That is not a descriptor you want attached to your vision of Death Wish; it’s a descriptor that would have Charles Bronson feeling the intense burn of shame. And yet, here we are. It’s 2018, and the new Death Wish is quaint.

A decade ago, perhaps that would not have been the case. The carnage, such as it is, of Eli Roth’s Death Wish might have felt groundbreaking back in 2008. We might have looked upon this exact same movie as an example of a remake done right. Tastes have changed in a decade, however. And so has cinema. Today’s action movie is marked by hyper-kinetic freneticism that crosses over into the absurd. It wasn’t but a year ago that we were watching in awe as Keanu Reeves, for the second time, single-handedly mowed down an impossible-to-count number of bad guys in a manic frenzy of violence and style.

Bruce Willis, as Paul Kersey, by contrast, takes out about nine—and depending on what, exactly, you choose to count, that number might even be a little bit lower. That isn’t to say that more violence makes for a better movie. You could make a quality vs. quantity argument here, and it would be perfectly valid. But in comparison to the type of revenge flicks we’ve been getting in recent years, Death Wish feels decidedly lacking.

Death Wish seems to have a problem with leaning into what it wants to be. More punches are pulled than triggers, and the result is a haphazard amalgamation of conflicting visions that never settles on what it is. Without any clear sense of purpose or reason, it becomes a remake for remake’s sake; a cover song that changes little and adds less.

Soulless wouldn’t exactly be the right word here. Roth is given some room to put his considerable and unique talents to good use and he takes those opportunities when he can. He is a master of tension, and one need look only at the scene where Kersey’s wife and daughter (Elizabeth Shue and Camila Morrone) are attacked to see where his talents truly lie. Despite the inevitability of the outcome here, Roth leaves us on the edge of our seat, stewing in our own discomfort as the fateful moment arrives. It’s heartbreaking and hard to watch, in true Rothian fashion.

It’s just too bad he’s given so little opportunity to play in his comfort zone. Joe Carnahan’s script doesn’t much allow for it. Carnahan is best known for making movies that are fun, if forgettable (see also: Smokin’ Aces, The A-Team, The Grey). Here, the writer attempts to stretch his wings a bit more and muse in the realm of the philosophical. What is justice? What is vengeance? When is either appropriate? Are they the same?

The results are varied. Much of the time, Death Wish merely ambles, haphazardly posing its questions, such as they are, without giving them due consideration. Roth, meanwhile, makes do with what he has to work with, guiding the film as best he can through the quagmire of banality that Carnahan has written him into.

Which isn’t to say that aren’t moments of greatness or that the film is entirely unenjoyable. Death Wish offers Roth the chance to play around where Roth plays best—witness the splatter of brains on the floor, the dented heads, the eye for the grotesque—but he’s never quite allowed to open up full-throttle, to go Full Roth, if you will, and the end result is lacking.

Also lacking is a sense of style. While Roth does make some interesting choices, and the film is peppered with more than a few delightful shots (no pun intended), there’s a distinct abundance of sheen that feels out of place in a Death Wish movie. Where Michael Winner’s original film was dirty and grimy, Roth’s is polished and clean. Where Bronson was mean and rough, Willis is almost playful. This is a film in search of an identity, and it’s never quite given the chance to settle into itself the way it needs.

Coming in at about 100 minutes long, the film’s welcome is well overstayed. At a brisk and tight 75-85 minutes, absent the tangential musings and ramblings, Death Wish might have been something special. At the very least, it might have been fun. It might even have been worthy of its name.

As is, it is decidedly not that. Absent a distinct style or point, Death Wish merely exists. It does its job, I suppose, but only just. You’ll probably cheer in the right spots, and you might be left with a vague sense of satisfaction at seeing the bad guys get theirs, but it never makes an impact large enough to be lasting. Chances are you’ll forget about it almost immediately. That is probably for the best. 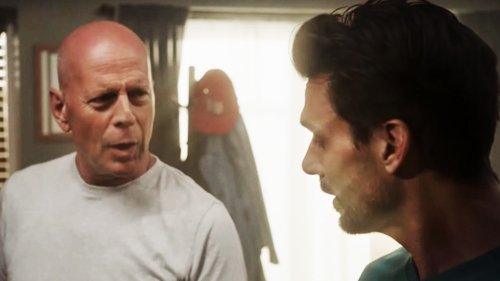