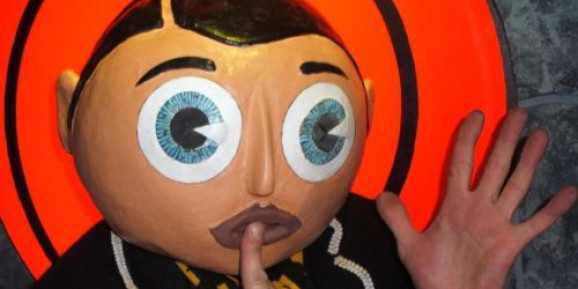 You can’t be blamed if the names Frank Sidebottom or Chris Sievey don’t mean anything to you. Stateside, neither name ever really made a dent in our cultural consciousness. Here that might mean that a name isn’t worth knowing, or that the people behind the names aren’t really famous.

There are degrees of fame, however, and we shouldn’t presume that just because we haven’t heard a name they aren’t famous. For a certain subset of people in England, both Frank Sidebottom and Chris Sievey are worthy of special places in hearts and minds.

Being Frank: The Chris Sievey Story is a wonderful ode to the unique mind and artistry that birthed Frank Sidebottom on to an unsuspecting populace of small town Britain. It’s a story of passion, commitment, fearless obsession, and dreams.

For those who don’t know, Sievey was a musician perennially on the cusp of making it big. He had a passion and talent for self-promotion that would have worked well in today’s social media era, but he had the unfortunate luck of trying to make it in the early 80s. His biggest, most well-known song, “I’m in Love With A Girl On A Certain Megastore Check-Out Desk” (changed from “Virgin Megastore” after the erstwhile chain threatened legal action), with his band The Freshies, was a poppy, fun loving song perfectly indicative of its era.

Life, as it tends to, had other plans for Sievey. Despite making it marginally big on local charts, he never quite pushed through to the big time. Frustrated, but empowered by a do it yourself philosophy, Sievey created his alter-ego, Frank Sidebottom, who would propel the artist to a kind of anonymous fame, allowing him to live out his dreams of stardom without anyone ever really knowing who he was.

Frank Sidebottom has previously gotten the cinematic treatment in the Michael Fassbinder film, Frank, though with its whimsical appeal, it didn’t much scratch beyond the surface of the story. Being Frank, however, digs deep. Using archival footage and modern interviews with his friends and family, the documentary is a love letter to Sievey and his art.

As Frank Sidebottom, with his childlike papier-mache head, would go on to delight a nation with his penchant for bizarre interviews and musical performances. He would go on to star in children’s shows, underground comics, and become a cultural phenomenon of sorts, something he wanted dearly but was unprepared for.

While never reaching the heights of fame and fortune that he desired, Sievey’s story does work as a microcosm of the potential pitfalls of sudden stardom. Like so many, he was derailed by an impulsive lifestyle that left him bankrupt and addicted at the heights of his career. Far from being a said tale, however, Sievey/Frank’s story is ultimately one of inspiration and encouragement, one that forces us to ask what the value of art is.

Is art for audiences or for the artist? Does an audience define its value or is its value indefinable? Sievey certainly approached it for himself, doing what he wanted to do and making no compromises, often to the detriment of his personal life. He was singular in his purpose, and while they might have derailed him, the joy he brought, even to such a small audience, was certainly incomparable.

As Sievey showed us, none of us have any excuses. As the final title card of the film says, “Now let me know what you would like to do and give me just one good reason why you can’t.” Sievey’s words stand as a kind of mantra for artistic expression and dream following. Anything is possible in this bizarre world, and we can achieve anything. Don’t believe that? Just look at Frank Sidebottom. By all rights he shouldn’t have existed. But he did. If that doesn’t inspire you I don’t know what will.

About the author: James Roberts

James Roberts is a freelance writer based in San Antonio; he writes about music, movies, television, and pop culture. When he’s not writing, he does his damnedest to convince his friends and wife that watching movies and TV actually does, in fact, count as working. While he’s neither good at nor terribly active on “the Twitter," he encourages you to follow him at @jroberts3456, if that’s your thing. James is an affiliate member of the Houston Film Critics Society and a member of the Online Film Critics Society.