I wouldn’t blame if you’d never heard of Blaze Foley. I couldn’t. Blessing this earth for just 39 years, he didn’t have the time to gain the superstardom that many—rightly—feel he deserves. At the time of his death, those outside the Texas country scene—which has, since, become a monolithic presence in the larger country mileu—didn’t much have the exposure to Blaze to truly form an opinion. It wasn’t until after his death in 1989 that his torch was carried onward. Lit by his friends and those who loved him, including the likes of Townes Van Zandt and Lucinda Williams, Blaze has spread, setting fire to all who come into contact with his music and legacy.

Even then, that fire is only now truly starting to take hold. He didn’t leave much behind, musically. Much of it was lost, only to be found later and released after his death. There’s a kind of mythic quality to the man and his music. He’s shrouded in mystery and intrigue, one that’s only bolstered by the pedigree of his friends and champions.

I suspect we’re on the cusp of a resurgence of Blaze and his music, and I suspect we’ll have Ethan Hawke to think. His latest film, Blaze, is a love letter to the man, his myth, and the artistic process that both surround and encompass its subject. Co-written by Hawke, alongside Foley’s ex-wife Sybil Rosen, Blaze is powerhouse memorial of a man who left us too soon.

Starring singer/songwriter Ben Dickey, in his first performance, Blaze follows the life of its namesake through the eyes of those who knew and loved him best, his wife Sybil (Alia Shawkat) and Townes Van Zandt (Charlie Sexton). Chronicling his rise to almost stardom to his tragic death, we’re taken on a mystifying journey through and across Blaze’s life.

It’s a work of sheer passion from Hawke and Dickey, both of whom do serious work to ensure that Foley’s tale is told with as much love as possible. The film unfolds almost formlessly, with the narrative bouncing from y to b, a to z, x to c in fits and starts, leaving us no time to catch our bearings as we’re thrust into the eras of Foley’s life. Though it is ostensibly his story, it’s one that’s told through the eyes of others, with the disparate views coming together to form a mural that celebrates the man.

Like a mural, much of what’s depicted only truly makes sense once you’ve taken a step back from it and can view it as a whole work. The effect is stunning, playing much like an exercise in memory. This disjointed approach to the narrative draws you in, captivating you with its vignette-like structure that, in total, paints a beautiful loving picture of a man about which too few know.

Dickey, who earned a Special Jury Prize at Sundance for his performance, gives a captivating performance that you can’t turn away from, disappearing entirely inside the many facets of Foley’s life. You wouldn’t think that this was his first time in front of a camera considering how effortless he makes it look. He has tapped himself into a raw talent that many take years to develop, and every second he’s on the screen is a whirlwind that dares you to look away.

Though about Foley, Blaze is truly anchored by the reminiscence of Sybil Rosen, who is brought to life by Shawkat giving, arguably, the best performance of her career. (Rosen, incidentally, has a small cameo in the film as her mother.) Her chemistry with Dickey rolls off the screen like a ballad, grabbing you, affixing your eyes on the screen with sheer, uncontainable magnetism.

While the rocky romance portrayed by Dickey and Shawkat propels much of the film, it’s the music that sells it. Dickey and Hawke have worked tirelessly to act as stewards of Foley’s music, bringing it to what might potentially be its widest audience ever. Dickey brings his own approach to the tunes presented here—which are laid out almost like a musical, in the O Brother, Where Art Though? or Inside Llewyn Davis sense of the word—but it’s an approach that’s true to the spirit and feeling of the originals.

Spirit and feeling are, in fact, the cornerstones of Blaze. Maybe it didn’t happen the way it’s shown on screen, but it at least feels like it might have. This of course plays well into the mythic feeling of Blaze Foley, a fact that is only heightened by the disjointed narrative structure. Hawke has really come into his own as a director (and writer) with this film, which will hopefully open up the floodgates to allow him to flex his artistic muscles even more in future endeavors.

Even the film’s imperfections seem, somehow, appropriate. Foley was a man who thrived on his imperfections, creating beautiful, powerful art out of the pains of his often-troubled existence. There’s beauty to be found where ever you might look, often even within your flaws. In this way, Blaze embraces itself and creates a work that exalts the Good Word of Blaze in the best possible of ways.

Whether you’ve known him for years, have only heard about him, or have never heard the name Blaze Foley in your life, Blaze is a one of a kind biopic that deserves your attention. At the very least, you’ll find yourself become a converted fan. At most you’ll discover a film full of passion and art that will remind you of how good the medium can be. Either way, you’ll walk away smiling. 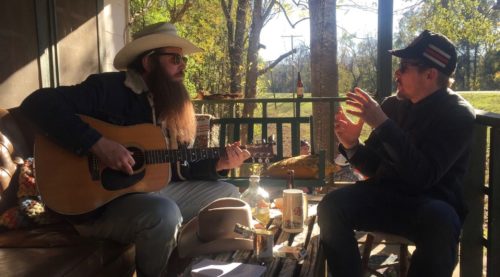 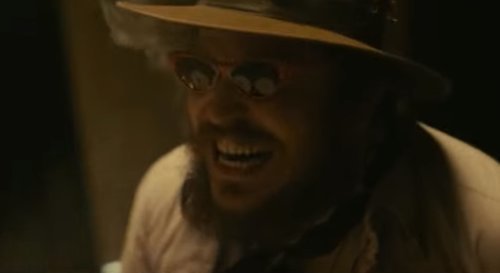 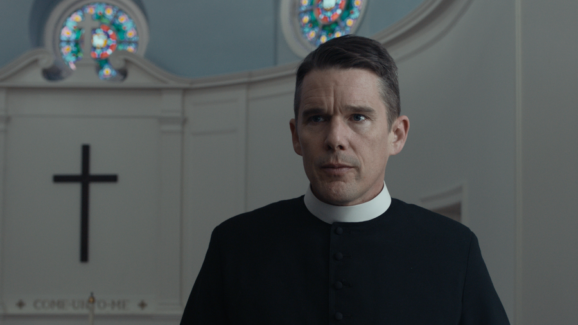 ‘First Reformed’ Held Down By Its Own Heavy Hand (FILM REVIEW)