A Film & TV Gift Glide: What To Get The Cinephile On Your List

Now that Thanksgiving has come and gone, there’s absolutely no denying it’s the holiday season. So, if you’re out there looking to score some gifts for the film or TV lover on your Christmas list, here are a few suggestions to help you make the right decision. At least as far as what kind of gift you put under the tree.

For all the dozens of Batman adaptations we’ve gotten over the years, nothing has ever captured the Caped Crusader quite as well as Batman: The Animated Series. Now, the entire run of the show is available on Blu-ray, along with a few special features including commentary on 11 specially selected episodes from the cast and crew. As an added bonus, you get three mini Funko figures, including Batman, The Joker, and Harley Quinn — who made her debut on the animated series and has become one of the most popular characters ever since.

The Deluxe Limited Edition only made 30,000 copies, so it’s bound to be a collector’s item in years to come.

If you really wanna test the limits of someone’s binge-watching abilities this year, there’s no better way than the Middle Earth 6-Film Collection. Featuring the epic spectacle of the Lord of the Rings trilogy, and the… lengthy interpretation of The Hobbit (also spread out over three films for some reason), that means more than 33 hours of entertainment remastered for Blu-ray. More if you include bathroom breaks.

Now that everyone’s out there confused by the changes that The Crimes of Grindelwald implies for the universe constructed by J.K. Rowling, go back to where it all started with the original Harry Potter films, remastered in glorious 4K. It should be noted, however, that while stunning to look at, this is particular set will lack any extras. If you want the extended versions, deleted scenes, or any behind-the-scenes shenanigans, you’ll need to stick to the Blu-ray versions.

Help commemorate two decades of one of the most quoted cult comedies in existence with this Big Lebowski box set. In addition to the movie, both regular DVD and ultra-crisp 4K (plus a digital copy), you’ll also be getting a bowling-ball-shaped pencil holder, a polishing cloth that’ll really tie the room together, and a cozy sweater much like The Dude’s to keep the movie all snug on your shelf. If that weren’t enough, it can all be packed up in the bowling bag case it comes with, so you can share The Big Lebowski experience with anyone who’s house you’re willing to drive to.

The original shared cinematic universe is back, as Universal has revamped and remastered all 30 of their original monster movies in one comprehensive Blu-ray collection. Now, normally when you remaster classic films, sometimes something can get lost in the translation, or it ends up looking like you’re watching a soap opera instead of a cinematic classic. This is not the case here, where every film looks brilliantly black-and-white, but still true to the original celluloid that was fed through the projectors back in the early 20th century.

Come for classics like Dracula and The Wolf Man, stay for the Abbott & Costello films. 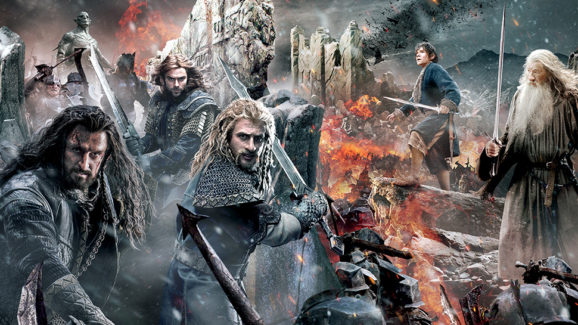 ‘The Hobbit: The Battle of the Five Armies’ (FILM REVIEW)