January 21, 2019 by Lee Zimmerman in Album Reviews, Reviews No Comments 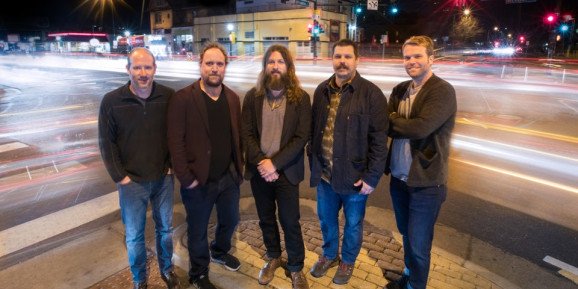 Despite whatever inferences are implied by their handle, Greensky Bluegrass rely more on their own invention and less on the more arcane strains of traditional bluegrass. Not that they’ve turned their back on those vintage strains entirely, but they’re clearly also adept at molding and shaping them to allow for a new breed of nu-grass entirely.

That’s never been more apparent than on All For Money, the band’s exceptional new album and an intriguing new chapter in the band’s ever-evolving trajectory. Here again, they demonstrate a dogged determination to elevate their efforts into unexpected realms. “I can’t do it alone,” they insist on opening track “Do It Alone,” a somewhat ominous offering that shows that indeed, to the contrary, they can do whatever they wish. The song provides the first hint of their intent to pierce the parameters and do it deftly as well.

That said, All For Money doesn’t subvert the form entirely. “Murder of Crows,” “Cathedral Eyes” and “Wish I Didn’t Know” establish their foundation in a bluegrass template, although here again it’s attitude as well as aptitude that matters the most. And while other songs — “What You Need,” “Courage for the Road,” and “Ashes” in particular — further elevate their efforts through an extensive musical dialogue that go way beyond between any rote instrumental exchange. The combination of banjo, guitar, bass, and dobro still provide a reminder of traditional trappings, albeit it in a broad and spontaneous way. Indeed, it’s easy to see how the majority of these tracks will provide excellent fodder for spontaneity in a live concert setting.

Ultimately, the new album reflects the essence of what Greensky Bluegrass has been about practically since the beginning, a band with reverence for their roots but a determination to carry a seminal sound forward. Traditionalists may object to the liberties taken, but ultimately, like any band with a decidedly progressive posture, it’s the risk that comes with the bending of boundaries. In the case of this exceptional outfit, it’s one well worth taking.

About the author: Lee Zimmerman

Lee Zimmerman has been an accomplished freelance music writer, reviewer, critic and blogger for the past twenty years. His work has appeared in No Depression, Country Standard Time, CBS Watch Magazine, Goldmine, Blurt, Country Standard Time, Bluegrass Situation, American Songwriter, New Times, Billboard, Keyboard Magazine and Performing Songwriter. Granted, he doesn’t make a lot of money for these endeavors, but the rewards come in the form of a steady influx of CDs and concert tickets, as well as the opportunity to interview many of his rock ‘n’ roll heroes. It also justifies the fact that he can keep a hairstyle best suited to a 25 year old surfer circa 1972.