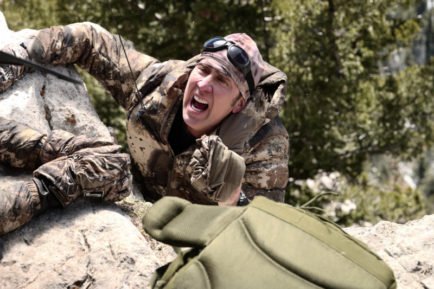 The subject of the international drug trade has been mined, and will continue to be mined, for numerous projects that litter the pop culture landscapes. While some have proven successful, like Netflix’s Narcos or Steven Soderbergh’s Traffic, the tepid crime drama Running with the Devil is not.

The film stars Nicolas Cage as The Cook, which we know because that’s how he’s labeled in one of many MTV-inspired, graphic-heavy character intros. He joins other illustrious characters like The Executioner (Cole Hauser), The Snitch (Adam Goldberg), and The Man (Laurence Fishburne). Despite the roster of talent here, none manage to make their characters more interesting than their vague descriptors.

Cage in particular, who could have single-handedly made this movie remotely watchable via his reckless, actor-ly tirades, chooses to play it positively restrained. Not even restrained, just outright boring. While Cage rarely taps into his inner thespian these days, he could have delivered a low-key, very un-Cage-like performance that was still engaging, but just seemed uninterested in doing so.

Which, for what it’s worth, is right in line with the plot. That involves The Boss (Barry Pepper) trying to figure out why his cocaine supply is being disrupted and cut. Of course, the FBI has sent The Agent in Charge (Leslie Bibb) to try and put an end to the entire outfit.

As one would expect, a mission that’s already doomed to go wrong ends up going even worse, with double-crosses, betrayals, and other assorted acts of violence. None of which proves sustainable enough to carry the film, despite the its overly indulgent, flashy first act.

Really, it’s almost impressive that writer/director Jason Cabell has thrown so many cheap tricks at the screen, yet somehow fails to make anything remotely engaging. It feels like a product from the devout worship of The Boondock Saints, which also wasn’t good, but at least had flashes of being genuinely entertaining.

In all fairness, these large, sprawling (albeit not quite ambitious) stories don’t always translate to a two-hour runtime — something made even more evident with the Peak TV era and what it’s done for long-form storytelling. Like, remember what a slog sitting through Syriana was? It’s a similar experience here, though without that sheen of prestige picture that the oil industry epic convinced itself it had.

Like Cage’s mundanity, the other cast members seem equally bored and uninterested in being there, with line-reads that feel like they made the final cut because they were the best the film had to work with.

Running with the Devil is playing in theaters and VOD now.

About the author: Christian Long

Christian Long is a freelance writer and pop culture obsessive based in Austin, Texas, who reviews movies and TV shows for Glide Magazine. You can also catch his work over at Uproxx, if you're so inclined. You can follow him on Twitter @cuneform.

One thought on “‘Running With The Devil’ Is Sprawling, Uninspired Drug Trade Drama (FILM REVIEW)”