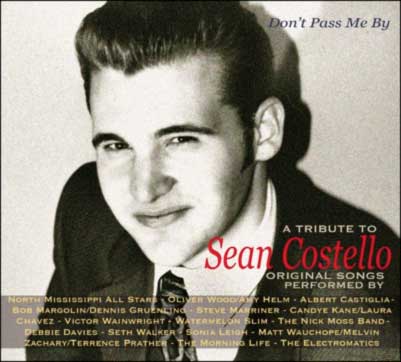 This tribute, Don’t Pass Me By, of artists covering 15 of the late blues artist Sean Costello’s songs is one that needs support for all the right reasons.  The artists have already done their part. The production and performances of all the artists were donated to benefit The Sean Costello Memorial Fund to Benefit Bipolar Research. Proceeds of album sales will also contribute to this worthy fund that was established after Costello’s passing in 2008 at the way-too-young age of 29. Produce by Jon Justice and Dave Gross, this project has been in the making for a while now, resulting in 15 distinctive performances that showcase the range of his writing and his deeply soulful sensibilities.

The list of artists includes those who knew and played frequently with Costello as well as those who didn’t know him but were influenced by his soulful approach. This writer saw Costello and his band in perhaps their finest hour at SWSW (believe it was 2007) at Antone’s when they opened for and then backed the great Hubert Sumlin. During the set, Elvis Costello (no relation, of course), who was in the audience alongside Robert Plant for the entire show, took his turn on Willie Dixon’s “Hidden Charms.” Sean Costello was absolutely on fire that night and was still beaming about it when I interviewed him some six-eight months later.

The artists chose their favorite Costello originals and submitted their recordings. None of them try to mimic Sean, who had a deeply soulful vocal delivery and well-honed blues guitar skills. For those who are unfamiliar with Costello, the type of vocal presence that he had is likely best represented here by Victor Wainwright, who sings the title track; Seth Walker who croons on the ballad “All I Can Do,” and the late Mike Ledbetter of the Nick Moss Band on “Hard Luck Woman.”  It’s also gratifying to see Amy Helm’s involvement as she sings with Oliver Wood on the closing “Feel Like I Ain’t Got a Home.” There was a period when Amy and Sean were very close.

There are other terrific artists aboard, especially the late Candye Kane, who teams with Laura Chavez for the rollicking “I’ve Got to Ride.” Other notables include the North Mississippi All-Stars, Bob Margolin, Albert Castiglia, Steve Mariner (Monkey Junk), Watermelon Slim, and Debbie Davies, among several others. The project was recorded in numerous studios, some commercial, some that were home-based. Dave Gross harnessed the material at his Fat Rabbit Studios and enlisted a cast of inside players to round out several of the tracks. They include drummers Ray Hangen and Mike Bram, harp man Dennis Gruenling who takes the front line both with Watermelon Slim’s take on “Who’s Been Cheatin’ Who” and Margolin’s “Low Life Blues,” and bassist Matt Raymond.

This is a first-class effort, filled with sparkling performances and few, if any, weak spots. It should also serve as a conduit to Costello’s own work, which, thanks to efforts like this, will not go unrecognized.