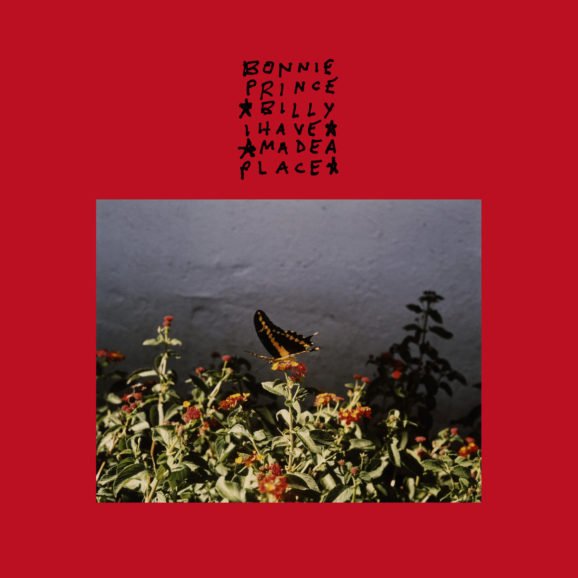 Will Oldham is never not busy.

No stranger to hard work, he revels in the collaborative process of making art, often singing and playing music on friends’ albums, writing for soundtracks, or showing up on film. Oldham is a steady hand at his multitude of jobs—this is, after all, the man who once sang, “Without work, you have nothing.” Oldham, however, shines whenever and wherever he shows up and the arrival of a new album under his own Bonnie “Prince” Billy moniker is a joyous occasion. His latest album, I Made A Place, reflects that joy and simplicity.

Wolfroy Goes To Town, released in 2011, was the last solo Bonnie LP. The cultural landscape is vastly different from eight years ago, and Bonnie has grown more introspective, his songs more distinctive. The uglier life becomes, his songs intone, the more transcendent and necessary music is.

“New Memory Box” addresses his lengthy absence with an opening salvo: “You need to knock this one out of the park.” No chance of being let down; I Made a Place is his finest batch of songs in over a decade, a Bonny album that stands among the finest work of his lengthy career. Songs like “New Memory Box,” “The Devil’s Throat,” and “Squid Eye” are rollicking folk numbers with foot-stomping appeal. Banjos are plucked, guitars strummed, and Bonnie’s vocals are fast and loose, his voice rich and robust with tradition. These three tracks celebrate life, each one about tossing off the chains that weigh us down, each one announces their arrival with a euphoric atmosphere. “Time to recapture the world/Potty-train a Kodiak bear/if you’re a boy then dance like a girl,” Bonny implores on “Squid Eye,” an ode to diving in headfirst. Who you are is irrelevant, as long as you’re willing to shed your skin and dive right in like “Aquaman’s kid” or “Ariel’s kin.”

While much of I Made a Place is introspective and pensive, the songs alternate between solemn and sunny, primarily between the first half and second half of the record. There’s an air of apocalyptic dread in more than one set of song lyrics—“This Is Far From Over” warns that “half of life is gone for good/and we haven’t acted as we should”—but turns hard and troubling times into a special brand of Bonnie optimism. The end may be nigh, but Bonnie sings of a nature that forges on whether we are present enough in our daily lives to enjoy it or not.

Like many Bonnie records, the natural world is the sun around which all songs on I Made a Place revolve. “The Glow, Pt. 3” and “I Have Made a Place” may sound dirge-like in tempo, but both are paeans to perseverance, just like the delicate balladry of “Nothing Is Busted.” Each tune is hummable and lovely, the kind of soft-spoken tune that Bonnie weaves around acoustic guitar strums. The latter half of the album remains slow and steady—a pace broken only by the snaking horns on “Thick Air”—in contrast to the first half that culls the all the upbeat optimism into a packed room.

No other song encompasses Bonnie’s capabilities of quite like “Dream Awhile.” Sandwiched between “New Memory Box” and “The Devil’s Throat,” “Dream Awhile” is a sweet lullaby, one where Bonnie suggests, “When I have a problem/I know just what to do/I got to bed and dream awhile/something will come through.” “Dream Awhile” is the right song at the right time on I Made a Place. It drifts along on a soft melody with backing vocals from Joan Shelley while Bonnie sings of the power of dreams, the spooning of a lover, and a full “cookie jar” as potential solutions to our myriad problems. “Dream Awhile” is only one jewel in the crown that is I Made a Place but it shines bright and pierces the darkness. Bonnie hasn’t been gone too long, but his absence makes I Made a Place triumphant in its arrival.