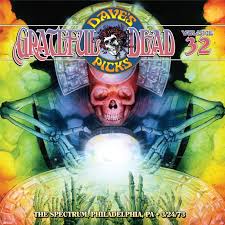 In lieu of the booklet of prose, photos etc., usually enclosed in each edition of Dave’s Picks, Volume 32 contains a foldout within which there are some replications of newspaper articles of the times, along with some striking photos of Jerry Garcia, Bob Weir and Phil Lesh. Conspicuous in its absence is any image of drummer Bill Kreutzmann, but that only serves to point up how prominent is his presence in the recording of this complete show from The Spectrum in Philadelphia on 3/24/73.

There’s certainly no lack of clarity in Rex Jackson and Kidd Candelario’s taping, but there is a curious imbalance in the stereo mix through the better third of these three hours. It heavily weights the guitars and piano of Keith Godchaux to the left and leaves most of the right channel to Kreutzmann’s drums. In doing so, the recordists have, intentionally or not, clarified a perception of how crucial the percussionist is to the action of the Grateful Dead: in turns snappy, punchy or slapping out the slow-motion beat of “Here Comes Sunshine.” the man’s motion around his kit accurately mirrors the gentle insistence of his partner in the rhythm section Phil Lesh (whose only real faux pas, not surprisingly, is his over-excited and pitch-imperfect vocal delivery of “Box of Rain”).

This once and future rhythm devil is equally adept in tight economy of numbers like “El Paso” and “Me & My Uncle” and when he churns through the intense close of the near-twenty minutes of “Playin’ In The Band.” It is perhaps no coincidence that it is here, while the group explores deep space, that the sound achieves a symmetry maintained through the rest of this first set and the entirety of the second. Rhythm guitar thus balances lead, leaving Godchaux somewhat unduly sublimated in the center, except for those fleeting moments when he tinkles the ivories during “Promised Land,” one of the two Chuck Berry songs that, along with “Johnny B. Goode,” bookend the second half of this show.

Those selections, like the aforementioned covers, serve a purpose even greater than mere pacing (though they do achieve that over the arc of this concert). The outside choices reveal what a range of originals were at the Dead’s disposal at this point in their career: familiar numbers such as “Cumberland Blues” precedes “Wave That Flag” (re-titled “U.S. Blues” by the time it appeared on From The Mars Hotel in 1974), an emotive and dignified “Stella Blue” suggests it was ready for inclusion on Wake of the Flood (due out a little over six months later) and. a studio version of “They Love Each Other” would show up nearly three years in the future, on Reflections, the third solo album from the titular leader of the Grateful Dead.

No inclusions are more striking, however, than the segues of “He’s Gone”>”Truckin’”>”Jam”>”Dark Star”>”Sing Me Back Home.” Offering a touching homage to the late Ron “Pigpen” McKernan, who had passed roughly two weeks prior to this show, the sextet exhibits remarkable patience, not just in the slow vocal coda to the first tune (the sweet harmonies of Donna Godchaux’ best exemplifying a restraint she doesn’t always display), but in the return to the fourth some ten minutes after the theme was first introduced. Concluding the string with the doleful likes of Merle Haggard’s song is an ideal set up for the celebratory air the band conjures up immediately after: “Sugar Magnolia” is a deservedly exhilarating transition at this, one of the group’s favorite venues.

Chief archivist David Lemieux veers dangerously close to pure puffery in his essay about this particular exhumation from the vault, but he can be forgiven his clumsy writing because he does, wisely, recede from play-by-play: he is wholly correct in stating it is far better to listen closely to this Dave’s Picks. From points of view other than his admittedly seasoned perspective, it is one of the best in a series marked by many highlights of the Grateful Dead’s history on stage.