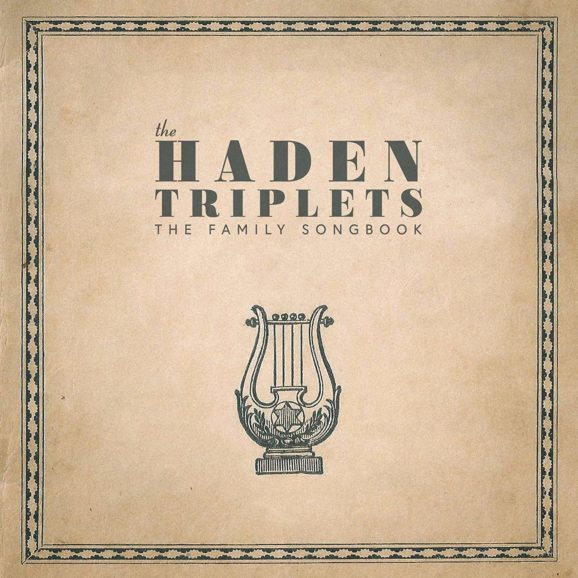 You may recall the evocative debut album from Petra, Rachel, and Tanya Haden, the daughters of legendary jazz bassist Charlie Haden, and/or you may be familiar with Petra Haden’s work with Bill Frisell, most recently on his acclaimed Harmony. The Family Songbook, the sophomore release from the three sisters, offers a similar sound to the debut, with stellar guests, some of whom return, as well as Frisell and others. While it is primarily a vocal album with harmonies that could only stem from harmonic instincts shared by siblings, who have been singing since they were toddlers, it is quite the guitar album as well, which we address later.

The Hadens have spent so much of their lives absorbing every instance of American music, from folk, country, and bluegrass to jazz, blues, and gospel, that they literally have a century of music to draw from, much of which they were directly exposed to from an early age. They have gone on to accumulate a list of credits that spans genres and takes in some of the most interesting music of the past thirty years – That Dog, Weezer, Beck, Foo Fighters, Green Day, Jimmy Eat World, Bill Frisell, Mike Watt, Paul Motian, and The Decemberists, to name just some.  So, it’s their unearthing of early American music from The Depression and post-Depression eras combined with indie rock and experimental sensibilities that make them unique.

The title alone suggests a bygone time when the family gathered around the radio rather than the TV in a much more interactive way,  and later to gather, guitars in hand, to sing. This album is faithful to that concept, with several newly discovered songs by their grandfather, Carl E. Haden, friend to The Carter Family and Porter Wagoner, and patriarch of the singing Haden Family. Their uncle,  Carl Haden Jr., had recovered his father’s sheet music and relics like the songbook, Favorites of the Haden Family. Some of the photos depict their then three-year-old father, Charlie Haden, as a featured singer – yodelin’ “Cowboy Charlie.” According to Carl E. Haden, “These uncovered gems are lost dispatches from a forgotten America – the mountains and prairies and swamps that conjured up the folk art and culture endlessly mythologized by everyone from Dylan to the Coen Brothers.” They include the four tunes written by their grandfather who was in his twenties during The Depression and was a popular radio performer. They include “Who Will you love (When I’m Gone),” “Ozark Moon,” and “Memories of Will Rogers” (copyrighted in 1936, the year after the celebrity cowboy perished in a plane crash.  “There’s a Little Grey mother Dreaming” was co-written with Ernest Harvey, an obscure country and western singer, and is the only tune, until now, covered by other artists.

Yet, there’s more than just nostalgia here this time. They render their brother Josh’s “Every Time I Try,” which was included in the Wim Wenders’ film The End of Violence, with Josh, who fronts the indie band Spain, playing bass on the track. Surprisingly they take on Kanye West’s “Say You Will,” giving it a flamenco kind of treatment. And, like its predecessor, they render standards including “Wayfaring Stranger,” “I’ll Fly Away,” “Wildwood Flower” and “Didn’t Leave Nobody But the Baby,” here called “Pretty Baby” and done a cappella inspired by the version in Brother Where Art Thou, famously sung by Emmylou Harris, Alison Krauss, and Gillian Welch.

Besides the vocals and instrumentation, much of the beauty of the album lies in the arrangements and production, guided by their longtime friend Woody Jackson, who also plays multiple instruments throughout. The sisters are obviously well-connected (Ry Cooder produced their debut) and have Ry’s son, Joachim, returning on percussion. And, finally to those guitarists – Bill Frisell and Greg Leisz, as they’ve done with Charles Lloyd and the Marvels, with Lucinda Williams, and others; play on three tracks.  Their gorgeous interplay on “Wayfaring Stranger” is akin to their wonderful work on Buddy Miller’s Silver Majestic Strings, one of the best guitar records of the past decade. Perhaps the same will be aid for this one in the new decade.

But, there’s more. Jackson plays alongside renowned picker Doyle Bramhall II on two tracks, and the ubiquitous Don Was uses Hammond bass pedals on “What Would You Give” while the late Canned Heat bassist Larry Taylor appears on three selections. Guitarists Ben Peeler and Zac Rae appear on multiple tracks and Jay Bellerose handles most of the drumming. Personnel differs slightly on each selection and the support is both sturdy and nuanced. It’s as if you need to listen at least twice even for the initial listen, once for the vocal beauty and again for the instrumentation.

Even though the year has just begun, expect this marvelous project to show up on many Year’s Best lists for 2020.