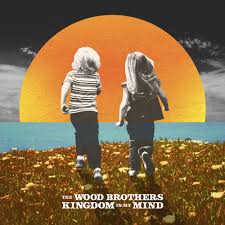 The cover art for the Wood Brothers’ Kingdom In My Mind may not be so stylish as that which adorned its 2018 predecessor, the Grammy Award-Nominated One Drop of Truth, but the title is just as provocative and the music itself follows suit. This eighth Wood Brothers studio album may be the most fully integrated record in their discography, certainly as much so as the first releases with the sibling as a duo.

That sound of Oliver and Chris singing together in close harmony while playing various acoustic and electric guitars and basses (plus occasional harmonica) has become increasingly enriched since 2012 with Jano Rix in tow. Drawing upon his versatile contributions as multi-instrumentalist/vocalist/composer/co-producer, the three-man Wood Brothers have grown increasingly more independent and self-sufficient in the interim and here, credited as co-author of all these original tunes (as with every album since 2013’s The Muse), Rix is more fully than ever a combination liaison and catalyst for the group creativity. Tracks like “Alabaster” sound as if they derive directly from impromptu jams from which the trio then crystallizes the arrangements.

Compositions such as “Little Bit Sweet” blend the blues, folk, rock and (a touch of) gospel upon which the two-man style was originally based. Even so, during cuts like “Don’t Think About My Death,” (one of a small handful of ruminations on mortality here), the separate components are as distinct as the fusion itself and no element becomes shortchanged in the process. Kingdom In My Mind flourishes as much from the unity of its recording processes as those creative fundamentals too: the continuity in the engineering is at once a reflection and a reaffirmation of the album’s seamless quality, not mention the realism of its sound.

Unlike the preceding album, formulated at a number of locations, this one was almost wholly recorded by Brook Sutton at The Studio in Nashville. Subsequently mixed in its entirety by Trina Shoemaker at Dauphin Street Productions, then mastered by Eric Conn at Independent,  tracks including “The One I Love” preserve the craft of the songwriting as much as the spontaneity of the own musicianship. The core players/singers (with vocalist Steve Lee as the only outside participant) also have some room to stretch out a little during “Cry Over Nothing” and “Jitterbug Love.”

It’s been a distinct and rare pleasure to watch the Wood Brothers evolve over the years because each studio effort marks an improvement, a change of pace or both. Kingdom In My Mind belongs in the latter category and, presumptuous as it may sound so early in 2020, is quite likely a candidate for ‘Best of The Year’ lists.

‘Illadelph Halflife’ To ‘Organix’ – Ranking All Albums By The Roots