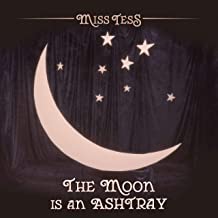 To many Miss Tess is a throw-back, drawing from old school blues, jazz, and country but what sets her apart from others who fall into that realm is her ability to inject more modern elements like punk and psychedelia into her mix. She has been relatively under the radar until perhaps now with The Moon Is An Ashtray, which is sure to gain notice.  She has an inimitable way of being timeless, both old school and contemporary at the same time.

To help frame her sound she used not just her reliable 1930s Weymann archtop guitar but also listened to input from co-producers Andrija Tokic (Alabama Shakes, Hurray for the Riff Raff) and Thomas Bryan Eaton, her full-time bandmate and musical partner. They were trying to find the intersection of more contemporary fare with the traditional approach that Miss Tess leans toward. This even translated to the type of equipment used – vintage mics, tube amps, keyboards, and tape machines. There’s a warmth in the recording that’s well-suited to her authentic voice.

Some may have heard the single ”True Flood,” sung in duet with Lake Street Dive’s Rachael Price. Interestingly, the Nashville-based Miss Tess was once a roommate of Price’s when they shared a Boston apartment in 2005. They were also in a band together, The Sweet & Lowdown. Their mutual backgrounds made Price the perfect harmony voice Miss Tess was seeking for the song, sung into a vintage RCA mic. The swaggering guitar solo midway in is that of Miss Tess, certainly far from a slouch on the fretboard. Before that one comes the opener, “The Truth Is,” sung with an indifference that belies its kiss-off attitude. It’s the only cover and she attests to loving the meanness of the lyric.

”Gamblin’ Man” brings high tempo country rock and a vocal delivery reminiscent somewhat of Dylan’s early talking/rapping style of “Subterranean Homesick Blues.” The lilting title track speaks to defiance, not in a typical way, but as a metaphor for not what we look at it but what we take away. In other words, the moon can be romantic, but a closer look reveals a barren, dusty, rather foreboding picture. The guitars and pedal steel wave together for a mystical backdrop. “I Wanna Be a Cowboy” sounds like an old vaudeville number, replete with yodeling. That seems to serve as a kind of comical break before she takes us through a series of love songs from many angles.

There’s a quiet undertow to “You Don’t Know How to Love Me,” a blissful, curious thrill to “One Little Kiss,” and an uncomfortable, rather incredulous stance in piano barrelhouse driven “Take It Easy.” There’s some dark deceptive psychedelic darkness in “Sugar Babe” to break the mood. She begins that one in Piedmont blues style, saying, “It might sound sweet at first, but the song actually speaks to an underlying sexual desire and yearning for someone who is either spreading their love around to many, or simply gone. Despite these frustrations, you are still deeply obsessed.” The blues morphs into a psychedelic swirl in the second half, connoting confusion and perhaps further frustration.

The last three might be a bit more direct but listen carefully because Miss Tess expresses defiance, challenging clichés and things we often take for granted. “These Blues” is a co-write with Oliver Craven from the disbanded Stray Birds who shares vocals with Miss Tess as Eaton lays down poignant guitar and pedal steel. The chorus “Will you be my baby tonight” comes off affectionately. “Human Being” is a co-write with Eaton, a melodic tune with stirring lead guitar lines from  Miss Tess and swaying organ and keys from Pahmer. The closer, “Riverboat Song,” is another co-write, this with Sean Staples, and wanders into dreamy psychedelia. Miss Tess even credits herself as playing “space bongos.”

Miss Tess swings, swaggers, seduces, and soothes on  The Moon Is An Ashtray where you’ll find misplaced romanticism, cynicism, and a few winks that could mean several things.