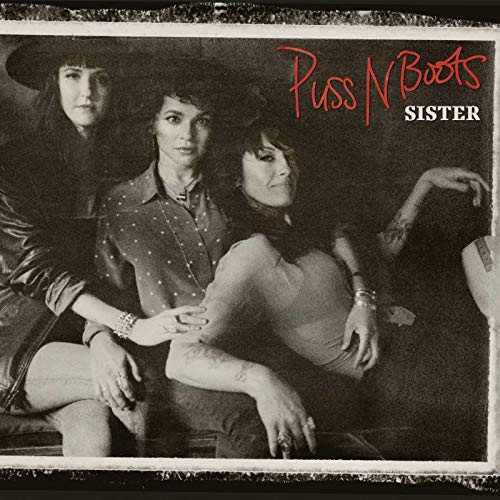 Most often female trios are associated with three top-notch vocalists, who get instrumental support from others, usually session players. After all, the album Trio from Dolly Parton, Emmylou Harris, and Linda Ronstadt was the blueprint for this kind of aggregation. Puss N Boots is different. Not only do all three members, Norah Jones, Sasha Dobson and Catherine Popper sing but each is a multi-instrumentalist, meaning their second album, Sister, is a total musical project involving all three without any outside help. It’s a collection of originals written by band members individually and collectively, along with covers from Tom Petty (“Angel Dream’), Dolly Parton (“The Grass Is Blue’), Paul Westerberg (“It’s a Wonderful Lie”) and Concrete Blondie (“Joey”). Jones, Dobson and Popper each take turns delivering lead vocals and trade-off on guitar, bass, and drums. In fact, the opening “Jamola” has a lengthy instrumental intro with Norah Jones on lead guitar before any voices join in.

Popper relates this about “It’s Not Easy” – “We were rehearsing for something and we took a break. I sat at the drums and started messing around. Norah came back and picked up a guitar and riffed, and Sasha picked up the bass, and in an hour, we had “It’s Not Easy.” My bandmates just love to make music and it’s been a great learning experience for me setting my ego aside and taking a chance.” “Nothing You Can Do’ is a defiant, sassy rocker grounded by a simple  Dobson guitar riff as all three trade verses in the chorus. “Lucky” is a gentle, lilting piece with acoustic guitar, focusing on the three-part harmonies. “You and Me” falls into a similar vein.

The Westerberg cover picks up the tempo, driven by the incessant beats of Norah Jones on drums. “You Don’t Know” is one of the more affecting, melodic tunes with Jones in the vocal lead and on the jangly lead guitar. The dark chords from Dobson’s guitar on “The Great Romancer” belie its title. The radio-friendly title track, like “You Don’t Know,” has one of those perfect-for-the-car singalong choruses and an economical, melodic lead guitar line again from Jones. “The Razor Song” sounds innocent yet offers scathing commentary on the male character. That attitude appears again in “Same Old Bullshit,” one where it’s easy to picture an audience joining in on the chorus in live performance. The covers are placed near the end of the setlist. Closing appropriately with Dolly Parton’s “The Grass Is Blue,” as if in tribute to that first famous female trio.

Undoubtedly this is high profile stuff, similar in a sense to last Fall’s quartet debut, The Highwomen.  As such, the group has opened for Neil Young and appeared at numerous festivals including the Clearwater Festival, Green River Festival, and the Newport Folk Festival. In 2019, Puss N Boots performed “The Grass Is Blue” at the GRAMMY MusiCares charity event honoring Person of the Year Award recipient Dolly Parton.

We’ll spare you the biographical information on the well-storied Norah Jones but a few words on her bandmates seem appropriate. Sasha Dobson is a New York jazz singer, songwriter and multi-instrumentalist. She grew up in a family of accomplished jazz musicians including her father, the great pianist Smith Dobson (Red Holloway, Bobby Hutcherson, Art Pepper); her mother, the endearing and sought-after jazz vocalist and educator, Gail Dobson; and her brother, multi-instrumentalist and prodigy of jazz drums, Smith Dobson V. At the age of 12, Sasha wowed the crowd performing at the Monterey Jazz Festival with her family and had since toured worldwide with her own band and Norah Jones, opened for Neil Young and Willie Nelson, and been a featured artist at Farm Aid. Since her debut album Modern Romance, produced by GRAMMY Award winner Jesse Harris, Sasha has collaborated with many leading musicians. She is currently working on a forthcoming EP with bassist and producer Don Was and drummer Jay Lane. She has been making NY appearances with her latest jazz project, a supergroup featuring Peter Bernstein, Neal Miner, Dred Scott, and Ian Hendrickson-Smith.

Catherine Popper is a North Carolina native who has performed and recorded with numerous artists including Hem, Ryan Adams and the Cardinals, Levon Helm, Karen Elson, Rhett Miller, Willie Nelson, Peter Rowan and Tony Rice, Norah Jones, Tommy Stinson, Alejandro Escovedo, She and Him, Jesse Malin, Boy George, Brian Fallon, Larry Campbell, and Jack White. She played in a pit orchestra for Head Over Heels on Broadway in 2018 and will be joining the pit for the upcoming musical, Diana in 2020.