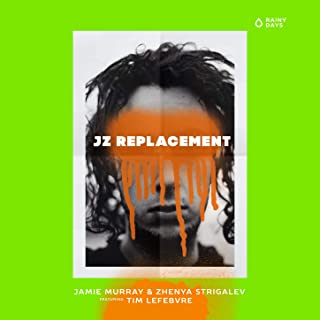 Some of today’s most aggressively, spiritually oriented saxophonists are based in London as evidenced by Shabaka Hutchings, Nubya Garcia, Massimo Magee, to name a few. Add Zhenya Strigalev to that list. Together with drummer Jamie Murray the duo takes the letters of their first names to form JZ Replacement.  The two are frequent collaborators and mainstays in the thriving London jazz scene and both have considerable resumes. Strigalev, an alto saxophonist, plays with Ambrose Akinmusire and Eric Harland while Murray’s background includes Sun Ra Arkestra and Native Dancer. Joining the proceedings is in-demand bassist Tim Lefebvre whose resume and genre-hopping stints could fill three more paragraphs. They include David Bowie, Elvis Costello, Wayne Krantz and Dan Rosenboom to mention just a few. Lefebvre has collaborated with Strigalev on previous projects.

This is free, improvisational, organic, original, oft frenetic, highly danceable fare. Often these kinds of collaborations are more spiritually oriented, but this simply leans more toward a free-flowing energetic workout with Strigalev’s alto conjuring up the free jazz sound of Ornette as his bandmates Murray and Lefebrve also feature prominently in the mix. The music can take some dizzying turns in tempo, citing “Displacement” where Strigalev has a mid-piece droning passage that leads into a furious, no-holds barred sequence with all three players at full throttle.

Having performed together in Murray’s solo project “Beat Replacement” just two years ago, they found natural chemistry and appreciation for free-flowing experimentation. They decided to refine their collaboration into something more precise without compromising on their connection. They claim to draw from elements of Breakbeat, Eastern European Folk and free jazz, whilst also echoing John Zorn, David Bowie, Zach Hill, and Miles Davis. Often the rhythms are incredibly precise, attesting to the talents of three. Check out “Five Cymbals for Jamie,” for example.

As with most free jazz, this is an impassioned, in-the-moment emotional statement. As such, there’s not much point in analyzing it in the normal sense. It doesn’t lend itself to that but instead stands as an invitation to shut out the rest of the world, dive in, and appreciate what they are expressing. It cannot equate to the live experience which adds so much visually but one can make their own visualization while listening.  It’s highly unpredictable and one can alternate the focus on each of the three instruments to appreciate just how creative and imaginative these three players are. It moves from conventional bebop to surreal realms to Ornette’s bluesy lines, to dramatic crescendos and diminuendos that leave one wondering what will follow.

Disrespectful comes from the Russian label, Rainy Days Records, a forward-thinking label deserving of additional mention. Last June the label released The Change, a quarter comprised of Strigalev and guitarist Federico Dannemann backed by New York musicians Obed Calvaire (drums) and Luques Curtis (double bass). Last October the label released a trio project entitled Zoo from pianist and composer Evgeny Sivtsov joined by bassist Dan Chmielinski and drummer Shawn Baltazor. The label has major plans for 2020. In addition to these names and more, some of the collaborators include bassist Tim LeFebrve, Christian McBride, Jeff “Tain” Watts, Nicholas Payton, Essiet Essiet, and Josh Evans among many others. Musical Producer Sasha Mashin explains the label’s mission this way, ‘of course, in Russia we boast a formidable legacy of classical arts like Russian ballet and Russian classical music, veterans of which including Tchaikovsky, Mussorgsky, Glinka, Stravinsky, Shostakovich, Prokoviev etc. We as a label will support openness and creativity in our musicians, aiding them to create new, innovative, bold music, without fearing the potential of hostility from international audiences, in response to this niche art.”

That last statement applies in spades to this collaboration. Listen up and get lost in the music.