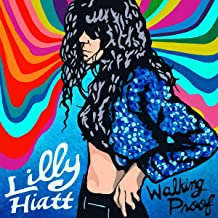 Walking Proof is Lilly Hiatt’s fourth album, aptly named in a sense as it represents major steps forward both lyrically and sonically from her 2012 punkish debut and the 2017’s contemplative Trinity Lane. She seems to have put aside some of her angst and hurt. She says, “When I got that little gap in my schedule, it gave me the chance to appreciate some mental stillness. I can be a pretty anxious person but found a sense of peace by deconstructing all of these interactions and emotions I’d experienced and reconfiguring them into songs. It helped me make sense of everything and learn to relax.”

She’s still grounded in rock n’ roll but has stripped some of the rough edges off, revealing a more tender side with lyrics like these in the empowering “Brightest Star” –“So don’t worry about that other guy/He just got the right tattoos/The brightest star in my whole sky is you.” There’s the acknowledgment of personal growth in the title track – “I could tell you that it’s easy / But that wouldn’t be the truth / If you ever need to call me / Well, you know, there’s walking proof. “ It’s not all the way to ‘living proof” but signals that she’s getting there.

The album was produced by former Cage the Elephant guitarist Lincoln Parish (Lucinda Williams), who plays guitar and keys in her backing quintet. Hiatt also tapped guests Amanda Shires (fiddle and vocals on the title track and “Drawl”), Luke Schneider (pedal steel on “Move”), and Aaron Lee Tasjan (guitar on “Little Believer” and vocals on “Never Play Guitar’).  For the first time, she invited her dad, the legendary John Hiatt to sing, and he does on “Some Kind of Drug.” They have each covered the other’s songs but never appeared together in a recording until now. Lilly comments, “I had to have him sing on that,” she says. “He needs to be on here. He’s almost ghostly in the mix. That was his place in the song for me. He came over, I gave him an idea and he just went for it. It was a pretty good day.”

Not only that, but a couple of threads here recall her dad too. Fans will quickly associate “Never Play Guitar” with her dad’s “Pretty Good Guitar” and she follows his lead in writing about her sister (one of his other daughters) in the opening “Rae,” a heartfelt, relatively gentle tune that leads into the driving power chord driven “P-Town,” followed by the anthem-like rocker “Little Believer.”

Crooning returns on ”Candy Lunch,” imbued with drawn-out ringing guitar interplay as she reveals more of her personality – “I’ve always done my own weird thing/Sometimes that means I want candy for my lunch.” Hiatt and Shires’ voices blend beautifully on “Drawl” as Schneider’s pedal steel adds a country tinge to the mid-tempo ballad. “Never Play Guitar” carries a steady rocking groove while “Move” is a brief melodic piece that leads to closer “Scream,” a dark atmospheric tune as she repeats defiantly “I ain’t slowing down for nobody.”

This is a leap forward for Hiatt who delivers her most fully realized album yet.