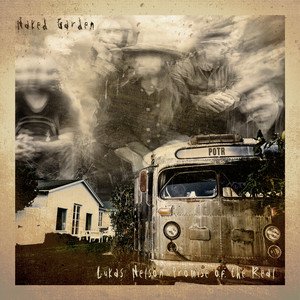 Naked Garden is a companion piece to Lukas Nelson & Promise of the Real’s return to form of 2019’s Turn Off The News (Build A Garden). Produced by the band and John Alagia, the same team that collaborated upon last year’s title, this 15-track collection assembles previously-unreleased songs and alternate cuts from sessions at Shangri-La and Village Studios, presented in and generally stripped-down format that highlights the group’s chemistry. With two more cuts than the prior set, this record is not only a testament to the group’s prolific nature, but as a coherent whole, more loosely-performed and less lavishly-arranged, it may well be superior to its predecessor.

Nelson, POTR and Alagia exhibit indispensable collective wisdom in the sequencing of this album. The bulk of the previously-issued material (albeit in different forms) resides near the end, including an acoustic version of “Civilized Hell” and an alternate take of “Bad Case” left off the previous LP. ”Entirely Different Stars” kicks the set off with an expression of relevance to our turbulent life and times, but as something of an antidote to the almost uncomfortable sentiment, the sprightly rhythm remains stable, punctuated with the bandleader’s acoustic and electric guitar chording, as bassist Corey McCormick and drummer Anthony LoGerfo align tightly with percussionist Tao Melgar.

Gospel-tinged vocals also mix with otherworldly sound effects there, courtesy multi-instrumentalist Logan Metz, so that, in a little over seven minutes, the quintet thoroughly captures moods both restive and tranquil. More of that dual recurring theme appears here in the form of “Movie In My Mind” and “Focus On The Music,” but this electric version of “Civilized Hell” stands apart as something else altogether: the sardonic twist of the lyrics comes through loud and clear in Nelson’s lead vocal, simultaneously conjuring up his sense of engagement and the healthy distance POTR maintain in their accompaniment.

That latter track is also a complete capture of the musicians with joyful abandon as they play and sing together. In contrast to their tentative eponymous album of 2017, Nelson and POTR have regained their swagger in full here, further validating how the sound was the concept of this release.

And while otherwise, carefully-considered track selections can always come into question via hindsight, it’s hard to know how “My Own Wave” didn’t make the cut for the original Garden album; the band cooks and Nelson wails on a well-wrought composition of sharp, unpredictable changes.

In marked contrast to the ebullience in Lukas’ encouragement to his bandmates there (and the good-natured repartee among them all elsewhere), on “Fade to Black” Lukas and POTR sound like the definition of fatigue. It is, however, a happy sort of weariness, well-earned and savored as such during its deliberate gait near the mid-point of this album. Sparkling sound on cuts like these alternate mixes of “Stars Made Of You” and “Where Does Love Go” only add to the sensation of sixty-minutes plus playing time passing at a deliciously quick pace while, in a palpable sign of the confident maturity at the core of this album concept, the ensemble demonstrates a unity of purpose on “Speak the Truth” that reflects their professional and personal fraternity.

Naked Garden will doubtlessly generate multiple and compelling possibilities for various blends of its tracks with those of its companion piece in a single compendium. Whatever the track order, however, any such grouping will invariably require (as if by predestination?) the same roughly two-minute conclusion that appears here: with the country waltz that is “The Way You Say Goodbye,” Lukas Nelson & Promise Of The Real quietly yet assertively conclude the execution of this shared spark of inspiration in a fashion far more infectious than it is self-conscious.