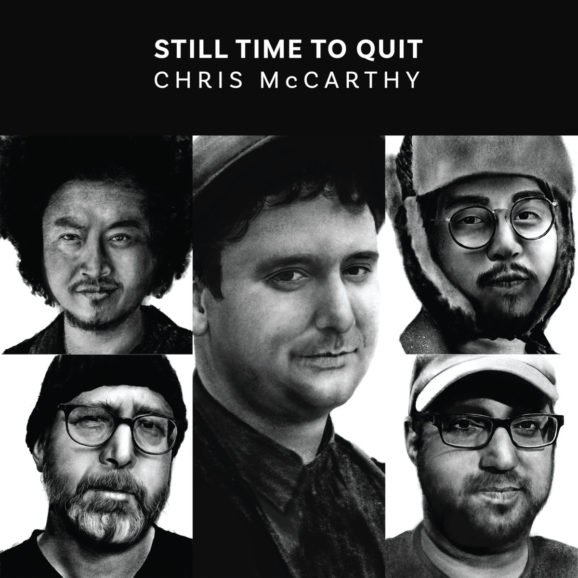 This is the debut as a bandleader for first-call sideman pianist/composer Chris McCarthy who leads a quintet of improvisers on Still Time to Quit. Little did he know when conjuring the tongue-in-cheek title (there’s still time to quit the often-unsustainable music business) that he’d be releasing the album during a health pandemic that may lend a more serious tone to that phrase. Maybe there’s a silver lining in that people are now looking more than ever for new music, due to spending more time at home. In any case, let that search begin here.

His NYC-based band includes trumpeter Takuya Kuroda, saxophonist Michael Blake, bassist Sam Minaie and the seemingly ubiquitous these days drummer Jongku Kim (JK). This band is featured on all eight tracks, all McCarthy originals. Kuroda is an ascending star with two albums as a leader: Rising Son and Zigzagger. Blake has been a veteran on the New York scene for over 30 years, having played with artists such as Charlie Hunter and Oliver Lake, to name just two. As the front line, the two communicate almost telepathically.

Bassist Minaie (Tigran Hamasyan, Melody Gardot) and McCarthy’s long-time cohort JK, along with McCarthy form the rhythm section, about which McCarthy comments, “They are a uniquely groovy yet free-spirited rhythm section, always bringing the funk in tandem with adventure.” Their collective statement is indeed free-spirited, unpredictable yet still tied to post-bop structures in many compositions. (After all, this is a keyboardist who studied with Fred Hersch and Jason Moran at the New England Conservatory and had a regular gig with Jerry Bergonzi’s band) . When listening to a tune like “Shockingly Effective,” normal ensemble parts are rendered in point-counterpoint and the soloists often engage in dialogue with each other rather than stretching out by themselves.

Other highlights include “Ready Steady Here You Go,” where Kuroda and Blake deliver combustible solos in a go-go funk groove and “Valedictorian Driver,” which is a reimagining of rapper Noname’s “Diddy Bop.” “That’s All You Get” is a wild, left of center swing tune, the only one you’ll find her in this otherwise exploratory set. Rest assured; they can take it down to ballad tempo as well. “Toasty” is a gorgeous display of tender playing from all three soloists. The meandering, ethereal “Nightmares” with Blake on flute becomes hypnotic in places. Throughout, McCarthy never tries to steal the spotlight, comfortably comping behind the front line, with most of his soloing crisp and economical. His shimmering, glistening style comes to the forefront on the outro to the closer “Bury Me in Times Square (Underneath The M&M Store).”

Given that most may not be familiar with McCarthy, his resume is worth examining. He backed acclaimed trumpeter Jason Palmer on his release At Wally’s Vol. 1, Sasha Berliner on her buzzworthy new album Azalea, and two releases from Ropeadope: Jared Sims’ The New York Sessions and Akinola Sennon’s Cousoumeh. On stage, he has performed with vocalist Clotilde Rullaud and bandleaders Jerry Bergonzi, Ben Allison, and Dan Blake. He also accompanies emerging artists Tony Glausi and Vanisha Gould. On his 2017 Sonder, also with drummer JK, vocalists and guitarist Max Light, he proved adventurous, mixing his own improvisational compositions with elements of pop, rock, folk, and even beat poetry. We only hear the improvisational side here, which is just fine.

This is a big step forward for McCarthy, an auspicious label debut that bodes well for the future. Hopefully, there’s not a shred of ‘quit’ in him.