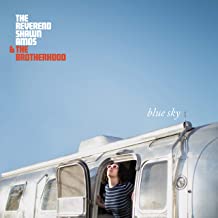 To be clear this is not the first album from Reverend Shawn Amos, it’s just the first with his newly formed band, The Brotherhood. Oh, in case you’re wondering, Amos is the son of Wally Amos (Famous Amos cookie brand). Known primarily as a blues artist, this reincarnation is a more widely ranging collection of roots songs, fusing blues with Americana. Some just call it good ol’ swamp music. While this writer hasn’t always been fond of Amos’ blues material, this concoction has appeal. That’s partly due to the players, as it usually is. The Brotherhood is a cohesive band of superior roots musicians that have played together before, including drummer Brady Blade (Emmylou Harris, Buddy & Julie Miller, Dave Matthews, Indigo Girls), bassist Christopher Thomas (Norah Jones, Carly Simon, Macy Gray), and longtime cohort, guitarist Chris “Doctor” Roberts. The Reverend sings and plays blues harp.

That core group is the primary driver but there are eleven contributors in the credits mostly on horns but on other instruments as well. And, there’s a group of background singers, dubbed The Sisterhood comprised of Piper Amos, Ruthie Foster, Sharlotte Gibson, and Kenya Hathaway. Longtime producer and friend James Saez (Social Distortion, Jerry Lee Lewis, Porno for Pyros), pulls it all together. Reverend offers, “When I first started recording blues material, I pulled up the bridge behind my American catalogue. Five years into this blues journey, I was ready to revisit that terrain, but in the end, I really believe that blues music is roots music. Making this album has allowed me to bring both sides of myself as a writer together.”

This effort is also inevitably fueled by Amos’ recent move from his hometown of Los Angeles to Texas, a much different place, yet with enough familiar touch points in Austin for him to be only partly out of his comfort zone. To conjure the music, however, Amos needed to create a stronger sense of home, to find players who provide not only musical, but also spiritual and emotional support for branching out, embracing new territory, artistically and otherwise. Enter Blade, Thomas, and Roberts, who’d first teamed up on Amos’ Mindi Abair-produced 2015 debut blues LP, The Reverend Shawn Amos Loves You. With this familiar collective, the Rev threw himself into the work of making a band album. Nonetheless, he felt they needed some isolation (the pre-COVID-19 kind) and took the band to the hill country of Wimberley, about 45 minutes outside of town, to Blue Rock Studios, home to many great recordings from Lyle Lovett, Mary Gauthier, and Wilco’s Nels Cline, among others.

“Everybody feels prides of ownership,” the Rev says, noting six co-writes with Roberts and one with Thomas, and, for the first time, no covers. Clearly, from the burning blues stomp of “Counting Down the Days” to the warm R&B of “Water” to the rollicking “27 Dollars,” (fueled also by Matt Hubbard’s pounding piano) to the upbeat NOLA- styled closer “Keep the Faith, Have Some Fun” (‘spread a little joy to everyone”) the Brotherhood sounds like a well-tuned engine.

The material showcases Shawn Amos’s songwriting like no previous outing; the wide span is by turns furious, vulnerable, crazy, forlorn and tender; all buoyed by a family approach. “When I first played blues,” the Rev says, “I had no interest in writing. I put up a firewall between the Rev and my Americana past.” Meaning his three Shawn Amos albums, lauded singer-songwriter offerings from the early 21st Century featuring sidemen like Ray Parker, Jr., Gregg Bissonette, Solomon Burke, and the Jayhawks’ Mark Olson. “But I slowly got the bug again, and now I’m letting that into the room, opening the aperture.”

He continues, “On ‘Breaks it Down’, I was experiencing the Trumpification of America, writing mostly freedom songs. With ‘Blue Sky’, this is the first time I’ve had the space to try to be more of a singer-songwriter within the confines of the blues. I’ve always loved Chris Whitley, a blues purist committed to pushing the lyrical bounds with impressionistic, poetic songs, personal but not maudlin, and just oblique enough so the listener can claim some ownership. That’s what we’re going for this time around.”

So, call it a reincarnation or a rebirth, no matter what, it’s infectious in a good way.