In Times Like These: Revisiting Medeski Martin & Wood’s Mighty 2004 LP ‘End of the World Party (Just in Case)’ 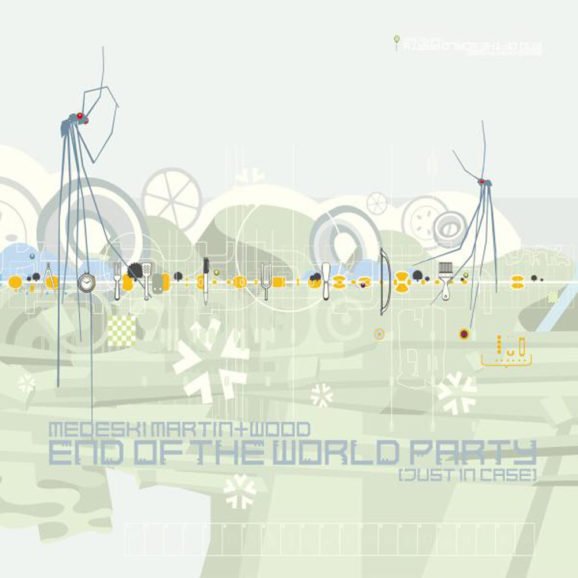 The continuing relevance of Medeski Martin & Wood’s music is such that their coup de grace for Blue Note Records, End of the World Party (Just in Case), resonates clearly and distinctly over the years since its September 2004 release. The foreboding overtones in not only the title but also the sound of the group’s eighth formal studio album now seem like harbingers of the lethal surrealism afflicting us in early 2020.

MMW had featured some alternately bizarre and cryptic art on their album covers before this–see Uninvisible and The Dropper–but no graphics were denser than the pastel color scheme of this design. Yet the stigmatic design inside and out, unsettling as it looks,  perfectly suits the almost impenetrable music. In fact, it’s arguable whether producer John King of the Dust Brothers (Beck, Beastie Boys) did right by the layered likes of “Anonymous Skulls” or this title song, with a panoply of textures including disembodied (synthetic?) voices. It’s not actually until the fourth cut, “Bloody Oil,” that the audio presence elevates appreciably via the complementary keyboard figures of John Medeski’s meshing across the stereo spectrum.

In evolving from its at least nominally trad trio format, as presented over a decade prior on Notes From The Underground, this band had honed its improvisational instincts through bonafide classics like Friday Afternoon in the Universe and Shackman and the ever-so-keen edge of their collective aptitude still comes through especially in the more skeletal arrangements here such as “Shine It.” That said, though, in contrast to the groove-laden fluidity of those prior works, the rhythmic pulse here is more often than not purely subliminal as it emanates from Chris Wood’s multiple basses and all manner of percussion instruments at the disposal of Billy Martin.

Throughout End of the World Party (just in case), too, there’s also an abiding duality in motion. On the one hand, it’s impossible to evade a sense MMW are absolutely bent on utilizing to the studio as a recording tool in and of itself, to the fullest possible extent, while simultaneously drawing upon their innate chemistry as musicians to the greatest degree they can. And while that two-pronged dynamic often may seem contradictory (even as it provides some worthwhile creative friction), it simply corresponds to a palpable sense of distance arising between musicians and listeners during tracks like “Queen Bee.”

Accordingly, while there are fewer sit-ins here than on those aforementioned two Blue Note albums (and generic credits preclude a specific list of a dozen keyboards), this is the noisiest album of the band’s to that point; with guitarist Marc Ribot present on four cuts including “Reflector,” the cacophony on exhibit during “Ice” and “Sasa” seems intended to grab our attention and hold it, certainly no less so when saxophonists Steve Bernstein and Briggan Krause join the fray on the latter tune. It’s as if the jittery edge in the musicianship serves as the means to counteract the whirlwind irrationality of current events that threaten to overwhelm us and them, despite all our best efforts.

For all their expertise and academic knowledge, Medeski Martin & Wood were then and are now, well aware of what goes on all around them. So it should come as little surprise this album does not carry the only ominous title in the MMW discography: their self-compiled anthology Best of (1994-1996) from the Gramavision label years was dubbed Last Chance to Dance Trance (perhaps) and there are traces of a dark fatalism within the name of the live MSMW album: In Case The World Changes Its Mind. In that context, it is hardly a coincidence that End of the World Party (just in case) would so accurately mirror the undercurrent of global unease at the time it was issued, and resonate almost equally with the world today in the throes of a pandemic.

This singular piece of work Medeski Martin & Wood now sounds altogether prescient in social, cultural and musical terms. Released just a matter of months following the inception of a war in Iraq (later found to have been initiated on a false premise), this record is an object lesson in how brilliant musicians can reflect their environment(s), without succumbing to grandiose statements. It only makes sense this most honest and insightful creation ultimately applied at least some measure of order to the toxic chaos of those times and how, even now, hearing it can affect much the same (relatively positive) state of mind.