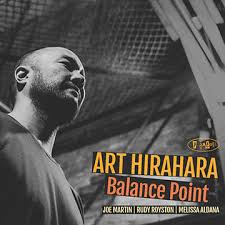 Pianist/composer/ and now bandleader for his fifth outing, Art Hirahara delivers an album of explorative self-discovery through evocative statements as he splits the selections between a trio and quartet format. The name should be relatively familiar to jazz fans, as Balance Point marks what appears to be his 59th album in total. All his albums as leader are on the Posi -Tone label, the niche jazz label, which issues a select number of albums annually, generally just one or two per month on average. Owner and man of many hats, Marc Free, produces, records, markets and more than anything, has discerning ears in choosing his artists. His relationship with Hirahara is obviously solid, considering the legacy of work.

The unit features bassist Joe Martin, in-demand drummer and label mainstay Rudy Royston, and award-winning tenor saxophonist Melissa Aldana who appears on five of the 13 selections. These are mostly originals with two free explorations and a solo rendition of Duke Ellington’s “Prelude to a Kiss.” Most of the tunes are highly lyrical and sit at the intersection of straight-ahead and modern jazz. (He has plenty of avant-garde outings under his belt too) Hirahara has performed on five continents and with a virtual who’s who in jazz, mostly as a sideman until evolving to his leadership role. Notably, his degree from the Oberlin Conservatory of Music is in Electronic and Computer Music but this album, like those as leader preceding it, are totally centered on the acoustic piano.

The beauty of Hirahara’s music is his gift for melody and subtlety. He won’t make you jump out of your chair but instead encourages a relaxed listen. Some have described has piano technique as midway between Bill Evans and Keith Jarrett which obviously covers an immense amount of styles. He begins in trio style with the simple melody that he heard while studying on the West Coast. He is NYC-based musician now, having relocated from the Bay Area in 2003. He then nods to the late “son of Africa,” Randy Weston with the trio on “Blessed Son, Mr. Weston,” infusing the tune with some African motifs. The title track introduces the richly toned, highly energetic tenor sax playing of Aldana. The concept of “Balance Point” is reaching that equilibrium in life where one can look both forward and back and accept their current state. “Ascent” is inspired by yoga movements and moves deliberately by the trio.

Aldana returns for “G. Yokoso,” a playful tune in the vein of Monk, where the one hears several bluesy lines and comping from Hirahara supporting Aldana’s adventurous lead. “Had It Happened,” a standout, will sound familiar to those who have a grip on standards as it’s a melody written over Jimmy Van Heusen and Johnny Burke’s “It Could Happen to You.” The trio swings hard on this one with a solo from each member, featuring a lyrical bass solo from Martin and an inventive drum break from Royston. Hirahara follows with the tender “A Line Between,” that evolves into a free form exploration with the trio before Aldana returns splendidly, seemingly using every conceivable note on her horn while supported by Hirahara’s bright chords and shimmering runs on “Like Water,” inspired by Bruce Lee’s statement, “Now water can flow or it can crash. Be water, my friend.” This track, too, is not to be missed.

Hirahara delivers Ellington’s “Prelude to a Kiss” reverently as a solo before taking off again on the free-form Jarrett -like “Fulcrum.”  Aldana and Hirahara collaborate on what begins as a  beautiful ballad “The Path of the Gods,” inspired by a trip to Italy where the steep mountainous path of that name overlooks the ocean with amazing vistas, captured in the expressive tonality of the players before building to an explosive climax before returning to the theme. “Homage” is a solemn trio piece while the closer, “Lament For The Fallen,” carries an even heavier tone, lightened just a bit by Aldana’s melodic ballad playing.

This is serious, eminently listenable jazz from exceptionally talented players, with enough variety to keep one engaged, especially imbued by Aldana’s strong contributions on every tune she plays on.