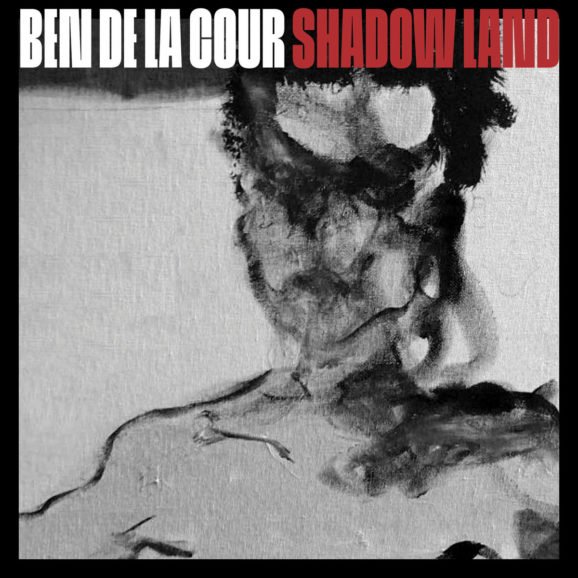 These ears are hearing Ben de la Cour sing in graphic detail about a suicide in “Swan Dive” and while in almost every other case, that would be a reason to stop listening, his album, Shadow Land, is instead captivating and riveting. After all, that song comes eight tracks in, well after being deeply immersed in his tales about those on the wrong side of the tracks, lost lovers, and murderers too. He brings a whole new kind of sensibility to the dark song – surely haunting and terrifying but almost inexplicably soothing and provocative. One gets the sense that these are honest observations or, in many cases, sketches of his endured real-life experiences. From the opening song, “God’s Only Son,” this is a different kind of listen. Its intimacy will force your attention.

That song is a rambling western about a bank-robbing desperado who has an existential viewpoint, expressed through multiple questions, about a higher power. The delivery of the narrative has the listener hanging on each word, with a curiosity to see what else de la Cour has to offer. He doesn’t disappoint. “High Heels Down the Holler” is a ragged blues with a greasy acoustic slide, the kind of stuff that’s a cross between the late Tony Joe White and Tom Waits. The rave-up “In God We Trust (All Others Pay Cash),” expresses his seething distaste for corporate types in lines like these – “putting candles on dog shit and calling it cake.”

That last song is sandwiched between two delicate ballads. “The Last Chance Farm” is about his first day in rehab (more on that below), with amazing lyrics like these in the chorus – “The kingdom of salvation/Hangs upon a rusty nail/Beneath a proud old painting/Of a ship with golden sails/Let them have their revelations/in the television light/The last chance farm is waiting.” He recounts a conversation with another rehab patient, part of which is in this verse – “Jerry smiled at me, looked down and ashed into her coffee cup/She said I know this is killing me but I can’t give it up/Then her words trailed off like cigarette smoke underneath the door/ Life used to feel so silly, it don’t feel that way no more.” Amazing Grace (Slight Return)” is equally gentle in demeanor.

The melodic shuffle of the title track becomes an autobiographical statement with “I’m just a stranger in this shadow land” with the harmonies of Adrina Turenne and glistening piano of Jeremy Rusu propelling it along. Rusu’s barrelhouse Jerry Lee-like piano ignites “Basin Lounge” to a punk speed-induced Dylan “Subterranean Homesick Blues” vibe. This brings us, at long last to “Swan Dive,” pairing a suicide with lost love, as interesting a song as you’ll hear from any singer-songwriter. He opens this way – “Joey bounce like a brick from the fourteenth floor window/I watched him go silently all the way down/ An angel in free-fall wearing a hospital gown…” Then to his own lost love in the chorus – “And I think about how/We’re so close to the edge/I can feel that cold wind start to blow/And my heart does a swan dive/Right out of my chest/Into a river of sorrow.”  This is brilliant writing, describing desolation as well as Dylan did in his song that begins with that word.

The next couple of tunes are relatively quiet musically and suitably, or better put, murderously bleak lyrically, setting up the menacing, Jim Morrison-like “Harmless Indian Medicine Blues” with its indelible line “I woke up screaming from an opium dream.” For the most part, de la Cour proceeds straightforward and raw, but on this tune he does adopt some of Morrison’s theatrical persona. Then for the closer, he sounds as cold and forsaken as someone standing over a grave a misty, rainy day. These are his last lines uttered on the album – But man’s a monkey on his dunghill/Drinking from a gold spittoon/And everything means nothing/In the Valley of the Moon.

Yes, as you likely guessed, de la Cour has a checkered back story. As a young man, Ben was a successful amateur boxer, even spending eight months in Cuba training with members of the national team. After playing New York City dives like CBGBs with his brother a decade before he could legally drink, he had already gone way off the deep end by the time he was twenty-one. He was a handful, to say the least. There were arrests, homes in tough neighborhoods all over the world, countless false starts and battles with mental health and substance abuse. But seven years ago Ben finally found himself in East Nashville, and after a successful stint in a dual-diagnosis facility, he’s racked up two years sober and made his best album yet.

Yet, this album was not made in Nashville (or East Nashville). And this is quite a story too. He wrote a grant proposal in hopes of receiving funding from the Canada Council for the Arts. “I locked myself away and wrote this fifty-page grant proposal without really sleeping. And then I went straight to rehab” he laughs. He caught a break – Manitoba Film and Music stepped up to fund the recording. So, Shadow Land, was recorded in Winnipeg with producer Scott Nolan in the middle of a polar vortex. “Scott wrote Hayes Carll’s ‘Bad Liver and a Broken Heart’, which is basically a modern standard, and produced records by William Prince, Richard Inman, Adam Carroll and a bunch of other great artists. We bonded over Nick Cave and the fact that we’re both recovering metalheads.”

“I figured everyone comes to Nashville to make records” Ben continues, “for better or worse I don’t get that excited about doing what everyone else seems to be doing. So, I went up to Canada in the middle of winter to make a record with a bunch of people I’d never met in my life. I flew my brother Alex in to play drums – we haven’t made a record together since our hesher days. We recorded almost the whole thing live, vocals included. I wanted to have fun. In an evil way.”  There are much bigger singer-songwriter names out there. Few can do what de la Cour does here as he delivers one of 2020’s most interesting and surprising albums.