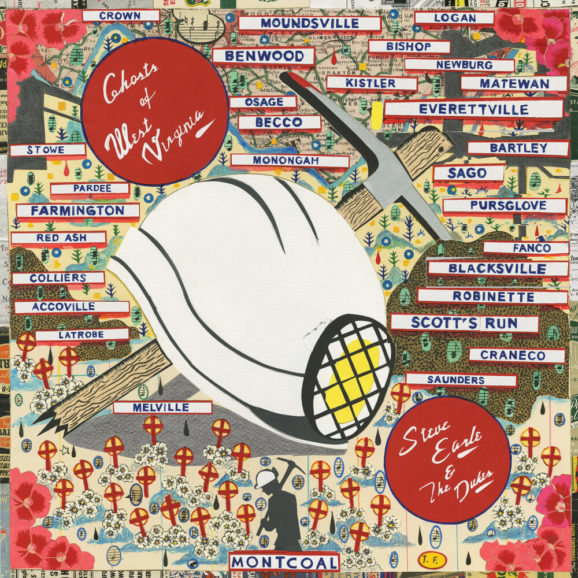 Every so often it’s good to step out of your comfort zone. Rather than siding with his usual social causes and left-wing leanings, Steve Earle decided to make an album “that spoke to and for people who didn’t vote the way I did.” Ghosts of West Virginia focuses on the Upper Big Branch coal mine explosion that killed 29 men in that state in 2010, marking one of the worst coal mining disasters in U.S. history. Investigations revealed hundreds of safety violations, as well as attempts to cover them up. The mine’s owners agreed to pay more than $200 million in criminal liabilities and shut the mine down.

Earle and his long-time band the Dukes explore the historical role of coal in rural communities which goes beyond just jobs and income to a sense of unity, patriotic pride, and purpose. It courses through generations of these people. Earle does his best to get into their mindset. He began working on the album after being approached by Jessica Blank and Erik Jensen, the playwrighting team that eventually created Coal Country, a theater piece about the disaster. In the liners, Earle notes, “The idea was travel to West Virginia and interview the few men who survived and the families of those who didn’t and tell their stories in their own words. That’s what Jessica and Erik do. My job was to write songs and incidental music that helps move the narrative along.” While the play was performed at NYC’s Public Theater last fall, Earle was onstage and along with his song, “The Mountain,” performed seven songs from what is now this recording, essentially a musical.

The distinctly raw sound is a cross between his usual folk-rock sound, and mountain music with generous hints of bluegrass, an area he explored earlier in his career. The album opens with “Heaven Ain’t Goin’ Nowhere,” a stark a capella spiritual centered on the faith and stoicism that runs through these communities. “Union, God and Country” is about the deep union history of the mines, which is being wiped out. Upper Big Branch was the first non-union mine in the area. “Devil Put the Coal in the Ground” is a recognition of the perils of a mining occupation, sung from a hillbilly point-of-view. The updated “John Henry Was a Steel Driving Man” also speaks to the effects of automation and union-busting.

”Time Is Never On Our Side” is about the four day the families of the killed miners endured because inspectors found footprints in the mine. Thinking some may still be alive, they later learned the footprints belonged to company managers who had entered the mine before the inspectors arrived. This emotional trauma becomes even more evident in “It’s About Blood,” where, under a pulsating rhythm, Earle reads the name of each of the 29 deceased. The closing song to the play is the lilting “If I Could See Your Face,” sung in the play by the actress Mary Bacon, but rendered here beautifully by Eleanor Whitmore of the Dukes (and the Mastersons) whose fiddle and mandolin is prominent throughout.

Three additional songs, related in subject matter, not in the play, follow. The rollicking “Black Lung” has what Earle thinks are the most important lines in the album – “If I’d never been down in a coal mine/I’da lived a lot longer/Hell, that ain’t a close call/But then again I’da never had anything/And half a life is better than nothin’ at all.” “Fastest Man Alive” is an ode to Chuck Yeager, a West Virginian native who became a war hero and first pilot to ravel faster than the speed of sound. Appropriately, Earle treats him as folk hero. Yeager’s risk in the sky underscores the different, unseen, and underrecognized risk miners face underground. “The Mine” is the first song Earle wrote, even though it wasn’t in the play. Thematically, it covers similar territory as “Union, God and Country.”

The album was mixed in mono because Earle has a mysterious (not related to loud volume) hearing loss in one ear. As they typically do, the backing Dukes provide first-rate support. Earle plays guitar, banjo, and mandolin with Chris Masterson on guitar, Whitmore on fiddle, Ricky Ray Jackson on pedal steel and dobro, and Brad Pemberton on drums and percussion. All sing. Newest member Jeff Hill adds acoustic and electric bass, replacing the late, beloved Kelly Looney. Long-time Earle collaborator Ray Kennedy did the recording, mixing, and mastering.

One of the driving elements behind the project is Earle’s belief that even when we don’t have beliefs in common with others, we need to learn how to communicate. He’s not only honoring those who died, but indirectly urging us all to not be self-absorbed and myopic.