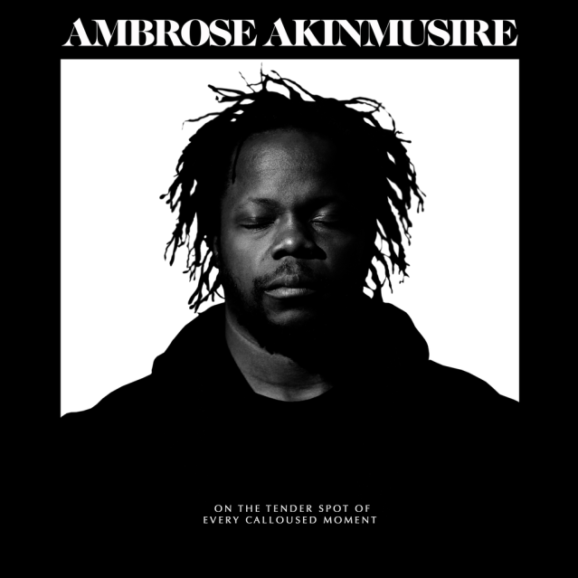 Ambrose Akinmusire, one of today’s leading trumpeters and contemporary jazz voices, returns to the way he began his career with 2011’s When the Heart Emerges Glistening. His are the somber tones of what black life in America means to him refracted through equal measures of jazz and blues. While the mood is requisitely dark, on the tender spot of every calloused moment comes off as a gorgeous tapestry of sounds.  While life can deal serious blows, Akinmusire is a fighter who believes in pride, resilience, and hope. In the wake of George Floyd’s brutal death and the cries for justice as protesters take to the streets,  the album couldn’t be more timely.

After stints in New York and Los Angeles, he returned to his hometown Of Oakland, CA in 2016 to see natives being priced out of their homes due to rising rent. The neighborhoods no longer look the same to the point where one doesn’t feel a sense of belonging among the new faces.  He grew up in a culturally rich community that he’s seen transformed into an unrecognizable place, the plight that’s befallen many black communities in large cities. Akinmusire says, “In a way, I was thinking about this as a sequel to my first record. I’m returning to the landmarks in my first album.”

The album begins with the lone cry of Akinmusire’s trumpet, on “Tide of Hyacinth,” it’s the signature sound of the album from the outset, a mix of jazz and blues, in a breath that speaks of pain, experience, and vibrancy that holds out hope. He is soon joined by his quartet of decade-plus long bandmates pianist Sam Harris, bassist Harish Raghavan, and drummer Justin Brown. On this piece, Jesus Diaz adds spoken words. The deep melancholy blues of “Yessss” follows, his band gently backing what is essentially another soliloquy for his expressive horn. “Cynical sideliners” is another quiet piece, a lullaby of sort, which Akinmusire says is a tongue-in-cheek ode to haters. Harris’ light electric piano underpins vocalist Genevieve Artadi’s encouraging words, “You are you and they are they. You’ll be brave and they’ll be safe.”

When we say Akinmusire is returning to the territory is his first album, he’s going back either further with the single, “Mr. Roscoe (consider the simultaneous).” Through a radio contest, he won while in eight grade his tickets brought him to a jazz show at the famed venue, Yoshi’s. With his mom, he witnessed anything but a conventional jazz show, as the war-painted Art Ensemble of Chicago took the stage. The “Mr. Roscoe” in the title alludes to the venturesome multireedist and composer Roscoe Mitchell, founder of the group and a 2020 NEA Jazz Master. Akinmusire first met him two years ago, when Mitchell was still the Darius Milhaud Chair of Composition at Mills College in Oakland. They convened at Mitchell’s house, improvising as a duo, and then playing through some of Mitchell’s music. (They later performed a quartet concert at The Lab in San Francisco.) Akinmusire says, “So that tune is based off some of the initial conversations that we had on that day that I met him. It was an amazing experience to see someone at that level, and an older musician, still searching.”  The parenthetical in the title is explained this way, “Two opposite things can be more related because they’re opposites. When you’re playing with Roscoe, the worst thing you can do is to play what he’s playing.”

The stark blues return on “reset (quiet victories and celebrated defeats),” where his quiet, piercing, haunting trumpet leads a mournful procession. As he offers, “This is me trying to express the pain, beauty, and optimism of blackness.” You hear the blues in his ballad dedicated to a major inspiration, the late Roy Hargrove, simply “Roy,” drawn from the Baptist hymn, The Lord’s Prayer, a funereal statement, again chillingly effective. Another composition says it directly in the title, “Blues (we measure the heart with a fist).”The album closes even more solemnly with “Hooded procession (read the names aloud),” played alone on the Fender Rhodes, which extends Akinmusire’s tradition of remembering the fallen. On When the Heart Emerges Glistening, he had “My Name is Oscar.” On the imagined savior he had “Rollcall For Those Absent,” where a child reads the names aloud: Amadou Diallo, Wendell Allen, Trayvon Martin, and Timothy Russell, among others. On Origami’s “the lingering velocity of the dead’s ambitions,” the tribute was implied: In lieu of names being rattled off, the music itself expressed grief. exquisitely. This one has no words either and sounds like tolling bells, calling for a list to be rattled off. Here Akinmusire is making his statement without his trumpet and it’s equally, if not more haunting.

We’ve also learned from NPR  that just as he sought out Mitchell, he sought out another elder, the saxophonist Archie Shepp, who write the liner notes, declaring Akinmusire “an important young innovator” with a work ethic like John Coltrane.  Akinmusire has collaborated with Shepp — notably at the Festival Jazz à la Villette, in a recent edition of the Attica Blues Big Band. “We’ve had conversations where I ask Archie: What is the blues?” Akinmusire says. “What does that mean in 2020? Like, my blues as Ambrose Akinmusire shouldn’t sound the same as Archie’s blues, and that shouldn’t sound the same as Bobby Bland or B.B. King. That’s what this album to me is trying to figure out,” Akinmusire continues. “I think it’s something that Archie lives. You hear him play, and it could be really ‘out’ or it could be honky-tonk saxophone, but it’s always the blues. Same thing with Roscoe, actually. There’s something in there, and it’s not the flatted third or the tritone. It’s the feeling. I’m trying to really put that in my music, in the same way as these masters.”

Curiously, Miles Davis isn’t mentioned as an inspiration, but a listener can’t help but think of Miles with those extended bluesy notes (the opening to “Round Midnight” for example). Miles once said, “The blues is the mother tongue; everything else is just commentary.” Akinmusire’s got that feeling of the blues. His resonates now as strongly as it ever has from the masters.