One of the bigger cinematic shames of the last few years was the botched release of Fast Color from writer director Julia Hart. Virtually unsupported by the distributor and held from review in many markets, the film languished in near obscurity and disappeared from theaters before word of mouth had the chance to catch up. While the film has since hit streaming platforms and gained a new audience and new respect, it was still nowhere near as seen as it should be and ranks alongside Unbreakable as one of the better works of original superhero storytelling ever put to film.

While its underperformance is a case study on botched film marketing and distribution, Fast Color still established Hart as a storyteller with an incredible talent for genre subversion. Her characters and narratives are strong, allowing her to create intricate playgrounds in which she can explore the emotions and realities of her characters and the world that they inhabit. That was the most brilliant subversion of the superhero found in Fast Color, and it’s a trend she continues with her latest film, I’m Your Woman.

Co-written by Jordan Horowitz, the producer of La La Land who also co-wrote Fast Color, I’m Your Woman is a fascinating, slow burning thriller that explores the crime genre from the perspective of the criminal’s loved ones. While nowhere near as great as Fast Color was, Hart and Horowitz have once again crafted a lovingly bending ode to a genre that forces audiences to reconsider what they know about how the genre operates.

Rachel Brosnahan (The Marvelous Mrs. Maisel) stars as Jean, wife of successful thief, Eddie (Bill Heck). Together they have built a decent, upper middle-class life, complete with a newly adopted baby, Harry. One night, however, a job goes wrong, putting Eddie in the crosshairs of the criminal organizations he works for. In order to protect his family, Eddie enlists old partner Cal (Arinzé Kene) to bring his wife and child to safety. On the run from unknown assailants, Jean must find a well of strength she isn’t sure she has to protect herself and her child from the rage of Eddie’s bosses.

I’m Your Woman feels somewhat slow to start, though this makes sense the longer the film goes on. Jean has been in the dark about the details of Eddie’s professional life for years, knowing only the broadest strokes of what he does. With Jean in the dark, so are we. While this leads to something of a slow first hour, Hart and Horowitz are deft in the way they dole out information to us, allowing for a consistently building tension that pushes in on us with methodical precision.

Though certainly no performance from Brosnahan can overshadow Midge Maisel, as Jean she brings an impeccable sense of confusion and creeping dread to the screen. Jean is a woman who has never had to do anything besides be a wife; her husband, she says at one point, won’t even let her drive a car. In that sense, I’m Your Woman is a story about a woman coming into her own and finally discovering the dark realities that allow her life to be lived as it is. Far from helpless, however, Brosnahan brings a reserve of resolve to the role that allows Jean to exist as a wholly actualized individual.

The film’s slow pace could be a turn off for many viewers, which is understandable. So much of I’m Your Woman involves implied threats that are rarely seen, and so the action, such as it is, is sparse and more often than not occurs off screen. Folks wanting a high octane and action-packed thriller absolutely will not find that here. Rather, they’ll find an expectation smashing slow burn mystery that drags us along for its long haul.

And it solidifies Hart as one of the most surprising and subversive directors working today. She is not a filmmaker interested in playing to the requirements of the audience. Instead, she plays with what audiences think they want to deliver a narrative more satisfying than most films within the same genre. Though for from perfect, and with a couple of twists that lessen some of the story’s impact, I’m Your Woman is still a powerful and poignant reimagining of the crime genre tropes that deserves consideration even after the film is over.

I’m Your Woman is now available on Amazon Prime. 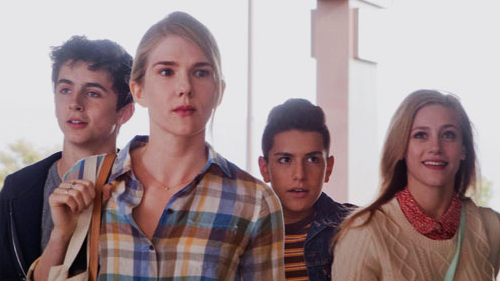