It’s common knowledge that Christmas songs suck. The bane of every holiday season, the curse of every service industry employee, and a stain upon the airwaves, Christmas songs, with their sappy sentiment and shitty music, are notorious for their lack of broader appeal to subcultures. But that’s not always the case. The years have brought us plenty of Christmas classics from icons of metal and punk that will appeal to even the most hardcore of music fans. While the ten songs included here are by no means all inclusive, they’ll certainly liven up any holiday celebration and allow even those with the blackest of hearts to find a little joy in the season.

The late great Dio recorded this chunky version of the classic carol for the 2010 compilation, We Wish You a Metal Xmas and a Headbanging New Year. The Black Sabbath/Heaven and Hell veterans bring a delightfully doomy sludge to this classic, with Dio’s iconic vocals screaming their way through those tidings of comfort and joy as Iommi’s incomparable wail carries him home.

Really, any song off of Bad Religion’s 2013 release, Christmas Songs, is a fantastic subversion of Christmas classics, but this punk rock rendition of this (frankly amazing) carol is enough to get even the most coldhearted and jaded of Scrooges in the proper fucking spirit. Bad Religion, with their trademarked “oozin ahhs” and harmonies are pretty much the perfect band to cover Christmas songs, and they really bring it on this track, which recalls classic punk rock intensity that will make you wish you could open up the pit as much as you want to open up your presents.

At the risk of involving myself in that eternal internet debate of whether The Nightmare Before Christmas is a Christmas movie or Halloween movie (it’s both), I can’t help but include this number from 2008’s Nightmare Revisited. While the album itself is largely a mixed bag, Korn’s version of this Danny Elfman penned track is one of the standouts. Not only does it bridge the gothy gap between our two best holidays, it’s also just an incredibly fun track that will remind you how great Christmas can be.

The Vandals, “I Don’t Believe in Santa Claus”

If I’m being honest, much of The Vandals’ 1996 Christmas album, Oi to the World, hasn’t aged well over the last quarter century, but this hardcore banger, chock full of their brand of snark and humor, remains an annual tradition in our house. It also, intentionally or not, reminds us that there’s more to the season than materialism and consumerism.

Metal legend Rob Halford amped up Christmas with 2009’s Winter Songs. His take on this classic carol is a solo-laden work of metal excess that can’t help but amp you up for the season and its greetings. While Halford’s voice is as great as ever on this track, the real star is the relentlessly thundering rhythm section that will have you banging your head while you hallelujah.

Dropkick Murphys, “The Season’s Upon Us”

It’s Christmas as only these legends of Celtic punk can deliver it. Part ode to dysfunctional families and part ode to Christmas cheer, these punks turn Christmas into a classic, alcohol fueled singalong that reminds you that no matter how much you might hate your family there’s still plenty of cheer to go around with good brews and good mates.

The connection between metal and classical isn’t exactly an unknown for music nerds, but J.J. Hrubovak, of Divine Rapture and Hate Eternal Fame, makes the connection more than clear with this rendition of Tchaikovsky’s classic Nutcracker piece. It also doesn’t hurt that this is death metal you could get your mom into. With thunderous wailing and pulse pounding delight, Hrubovak wails his way through this classical standard with a breakneck pace traditional for one of his standing in the world of death metal.

The Ramones, Merry Christmas (I Don’t Want to Fight Tonight)

Let’s face it, Christmas is stressful. The holidays tend to compound life’s natural stresses, and this is especially true for couples. This classic from The Ramones captures the sentiment of just trying to have a good Christmas with your loved ones, regardless of whatever else might be happening in the relationship.

This opening track from ABR’s 2012 release, Sleddin’ Hill, A Holiday Album, is somehow the most spirited and magical holiday track ever composed. Pulling out all the feelings of a white Christmas from this 4-minute long instrumental, the band crush and thunder their way through a nostalgia tinged musical ode to the glorious feeling of a snow day.

Taken from their 1980 released live album, Hanx!, punk legends Stiff Little Fingers rip their way through this sappy Christmas classic as only they can. Filled with their brand of drunken hooliganry and snark, their version of “White Christmas” feels like an ode to the jaded and disillusioned who, despite everything, deserve a Christmas jam to call their very own. 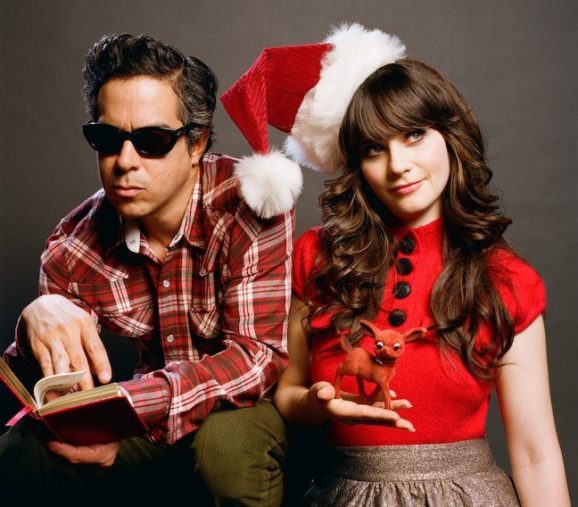 She & Him Reveal Christmas Album