Whenever you sit down for a movie starring Nicolas Cage, particularly one made during his steadily intensifying baroque period, there’s always a chance you’ll see a testicle explode. An outside chance, mind you, but still a much greater chance than one would expect from a movie where he doesn’t get top billing. Okay, maybe if it’s directed by Lars Von Trier, but that’s another topic of conversation.

Prisoners of the Ghostland, however, takes that chance in all its testicle-exploding glory. It even happens fairly early on in the story, which is a testament to how absolutely batshit crazy this film is.

Cage plays Hero, a former criminal who’s been rotting inside his jail cell since a bank robbery (and his partner) went sideways. He’s given a chance at redemption thanks to The Governor (Bill Mosely), the ruthless leader of Samurai Town, who’s adorned in a sparkling white suit, cowboy hat, and bright red leather gloves. Accompanying him are a mixed-race collection of geishas, swordsmen, and gunslingers — each dedicated to their respective genres with little or no mish-mashing of styles between them. I realize this sounds ridiculous, but it’s surprisingly easy to go along with.

Tasked with retrieving The Governor’s runaway daughter, Bernice (Sofia Boutella), he’s also given a special leather suit that’s rigged with several explosive devices, forcing Hero to abide by a strict set of rules. Namely, find Bernice and return to her Samurai town within five days, or the suit will kill him. If it wasn’t obvious, this is also how the aforementioned testicle explosion first comes into play. But not the last.

Bernice, meanwhile, has retreated to Ghostland, a society that leans harder into its Road Warrior vibe; impoverished, post-apocalyptic, and have their lives dictated by lore pieced together from stories pieced together from the world that preceded the one they live in now. The highway separating these two communities, however, is guarded by a clan of ghosts, who also make regular appearances in the collective nightmares of its residents, effectively making them prisoners (hence the title). Naturally, these ghosts make Hero’s seemingly straightforward quest take a dramatic detour, even before he gets his testicle blown completely off for violating the Governor’s conditions for rescue.

While the story is fairly routine, (if not a bit cliched), action movie fodder, it’s the grindhouse genre mashup helmed by director Sion Sono along with writers Aaron Henry and Reza Sixo Safai that makes Prisoners of the Ghostland such a satisfyingly weird and wonderful viewing experience. Sure, samurai films helped set the standard for cinematic action and were later ripped off paid homage to relentlessly by the Western genre in its heyday, and had their collective influence show up sci-fi fare like Star Wars at the end of the New Hollywood era, all of which continues to ripple through cinema today.

What Ghostland does, however, isn’t as much of a fusion of these styles as much as it’s a celebration of these two very different cinematic worlds by seemingly ramming them into each other at light speed. It’s the kind of world where Cage thrives as an actor, even here, where he tends to play things slightly more subdued than we’re used to (except when he’s getting his testicle blown off, of course).

With all the earmarks of a future cult classic, and an onscreen aesthetic that’s practically begging for midnight screenings in drive-ins and basements the world over, Prisoners of the Ghostland is an out-of-control joyride that lets its story stay within its convention while unapologetically creating a testicle-destroying world that is anything but.

Prisoners of the Ghostland is available in theaters, digital and VoD today. 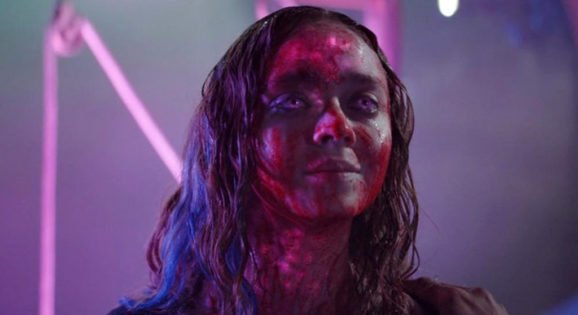 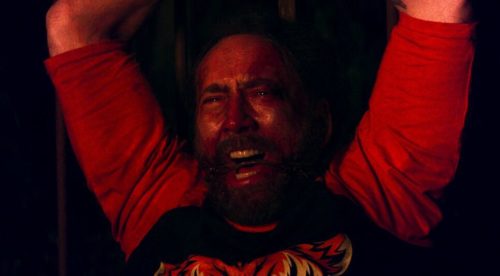