Leveraging the success of his Grammy-nominated 2020 All Rise and timed for the Holiday season with a couple of Christmas songs, Gregory Porter issues a double CD – Still Rising comprised of his favorite hand-picked songs, covers, four new ones, and a second CD of duets. Disc One is a simile of ‘greatest hits’ although Porter refers to it as a career to date perspective. Even the album title suggests this is just a stop along the way. Fans will recognize the classic Porter tunes such as “Hey Laura,” “Liquid Spirit,” and “Revival” which kick off the first disc, with “If Love Is Overrated,” “Holding On,” and “No Love Dying” later appearing. Disc Two is a set of 16 duets, each with a different artist featuring such names as Dianne Reeves, Lizz Wright, Lalah Hathaway, as well as vintage pairings with Buddy Holly, Ella Fitzgerald, Nat King Cole, and Julie London.

Let’s explore the new songs first. You may have heard the single “I Will,” about looking to our elders for guidance during dark times. It’s fits beautifully with Porter’s unfailingly optimistic outlook, one that might be schmaltzy in the hands of other vocalists, but none of today’s singers have found that special combination of jazz, soul, gospel, and pop like Porter has. These opening lines to another new one “Dry Bones,” are the essence of Porter’s approach – “I won’t die, won’t bury, won’t sink/’Cause love is a spirit I drink.” Produced by Troy Miller, who helmed Still Rise, it is thematically and emotionally in synch with that album with its insistent chorus “Rise Up” and has the clapping motif which made his song “Liquid Spirit” so successful. The commercially sounding “Love Runs Deeper” has an orchestral backdrop and will appear on Disney’s Holiday ad “From Our Family to Yours.” Finally, “Bad Girl Love” is a lovely new late-night piano ballad that finds Porter at his expressive best with a superb command of dynamics.

In addition to those new songs, Porter delivers a cover of Moby’s “Why Does My Heart Feel So Bad?” and ends the disc covering Sting’s “It’s Probably Me.” Perusing the balance, three come Liquid Spirit, three from Water, three from All Rise, and curiously only one from Take Me to the Alley. “L.O.V.E” is from his Nat King Cole tribute album. These are all fine choices, but we could live without his cover of Willie Dixon’s “My Babe” especially when not including “On My Way to Harlem.”

While the themes of the power of love and his unflagging optimism dominate, his protest song “1960 What” that first appeared on 2010’s Water resonates in this time of increased awareness of racial issues and social unrest. At the time of the recording Porter said, “I don’t say ‘1970, what?’ or ‘1980, what?’ but the timelessness of the song is implied, for when it happens in the next ten years, I hope it doesn’t, but it probably will. It’s a recurring story if we don’t learn from history.” Unfortunately, ten years passed, and the story recurred, hence the likely choice for the song to reappear too.

Disc Two gets off to a promising start with the gospel like “Natural Blues” song with Moby and Native Daughter Amythyst Kiah. “Don’t Let Me Be Misunderstood” with Jamie Cullum is a fair approximation of the original with Porter injecting his signature soul but the orchestral and vocal backdrops detract from the poignancy that Nina Simone delivered in her rendition. “Raining in My Heart’ (with Buddy Holly), “People Will Say We’re In Love” (with Ella Fitzgerald) are on the smooth commercial side. The oft covered Bill Withers chestnut “Grandma’s Hands” with Ben L’Oncle Soul though is just bursting with soul, as is “Insanity” with Lalah Hathaway, two of the better duets.

The sequence of “Make Someone Happy” (w/ Jeff Goldblum), “Fly Me to the Moon” (w/Julie London), and “Satiated” (w/Dianne Reeves) may please the traditional jazz vocal fans but ironically, in the latter two Porter surrenders much of his signature presence to the females. He presents the world’s most recorded song, “The Girl from Ipanema,” beginning with the voice of Nat King Cole, joining later, at times singing over the recorded bed of Cole’s voice. From Liquid Spirit he presents “Water under Bridges” with British vocalist Laura Mvula, playfully adding “London Bridge is falling down” and “Hey Laura” toward the end, giving it a nice touch. “Right Where You Are” is lifted from Lizz Wright’s 2015 emotive Freedom and Surrender while “Heart and Soul” comes from Yo-Yo Ma’s 2016 Sing Me Home featuring the leader’s Silkroad Ensemble and Lisa Fischer along with Porter. Like the duet with Wright, these two voices blend well together. Porter goes out romantically with Dutch singer Trijntje Oosterhuis with “Making Love.”  Overall, these duets lean a bit toward the pop side excepting the few pointed out above. One of Porter’s gifts is his deep, emotional uplift, captured so well on all his solo albums, an element that most these duets lack.

For the seasonal touch we have the snappy, effusive “Christmas Prayer” with Paloma Faith and the buoyant “Have Yourself a Merry Little Christmas” with Renee Fleming. Still Rising is a collection, well suitable for gift giving but if one is introducing the recipient to Porter for the first time, the giver would be better choosing some combination of Porter’s solo albums, especially those where he has written the material. 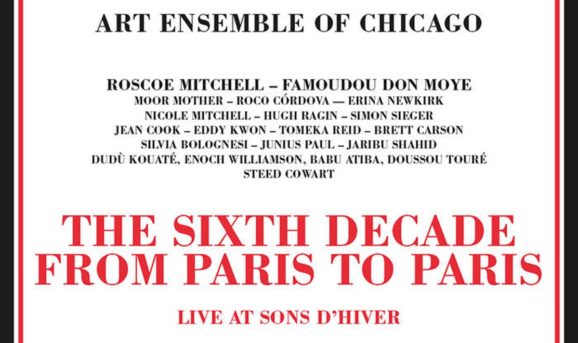 Art Ensemble Of Chicago Expands To Chamber Orchestra On Expansive ‘The Sixth Decade, From Paris to Paris’ (ALBUM REVIEW)