Given the tumult surrounding the Byrds at the end of 1966, it’s a wonder the group created such a stellar album as Younger Than Yesterday. Yet hindsight of over a half-century is particularly revelatory, both in terms of how this iconic American band found new resources within itself even as the members struggled to rise above the growing discord in their ranks.

This fourth Byrd album is as remarkable for what it might have been—a work of invention comparable to the Beatles’ Revolver–as for what it actually is as originally released: a formidable transitional work. On this first album to be entirely recorded by the Byrds without Gene Clark’s participation, guitarists Roger McGuinn and David Crosby continued to hone their songwriting skills; they even co-wrote “Why”  in an attempt to fill the void left by that founding member and chief composer’s abrupt departure early in the year prior to the release of Younger Than Yesterday.

Yet the paucity of original ideas for self-composed material that would plague McGuinn’s solo career (and the latter days of the Byrds’ existence) also manifests itself here. “CTA 102” continues his fascination with science fiction as introduced with “Mr. Spaceman,” but hardly extends the stylistic reach of this record (or its predecessors): it might well have been excised altogether and replaced with “It Happens Each Day,” a radiant, fully-formed outtake written by Crosby. “So You Want to Be a Rock ‘n’ Roll Star,” however, is something else again, a wry commentary of pop celebrity set to an insistent rhythm from co-author Chris Hillman’s bass, over which South African Hugh Masekela plays a bracing trumpet.

It is the first use of brass on a Byrds recording but hardly the last. Such instrumentation is integral to a superb cut of David’s not appearing on the album, the exalting “Ladyfriend; ” indicative of the author’s fundamentally argumentative nature, he fought almost as vociferously for the inclusion of the extremely self-indulgent “Mind Gardens” as the aforementioned gem as a single. The recognition  sought and most righteously deserved by this future collaborator of Stills, Nash & Young would’ve otherwise been based on his other splendid contributions to the album, “Everybody’s Been Burned” and especially “Renaissance Fair,” which prominently feature the Byrds signature sounds of chiming guitars and soaring vocal harmonies.

Along similarly, readily-recognizable lines lies the most surprising development within the Byrds at this juncture: the emergence of  Hillman as both a lead vocalist and songwriter. Besides collaborating with McGuinn on the aforementioned swipe at ephemeral stardom, he also contributed  “Have You Seen Her Face,” thereby reinstating a tangible emotional quality largely missing from the  Byrds oeuvre since Clark’s departure. In addition, the former bluegrass musician proved prescient by contributing two-country rock-flavored songs, “Time Between” and “The Girl with No Name,” both of which feature session musician Clarence White’s innovative guitar playing via the B-Bender device (he and Gene Parsons invented ; both of the latter musicians would further distinguish themselves  as official members of the band in the years to follow, circa Untitled and The Ballad of Easy Rider (not to mention the long-shelved concert recordings on Live at Fillmore East eventually released in 2000).

Meanwhile, Chris’ “Thoughts and Words” is distinguished by its author’s plaintive vocal as much as the sitar-like sound of backwards guitar effects. Such imaginative arrangements, reminiscent of “Eight Miles High” and the title cut of the Fifth Dimension album, belie the lack of commercial response to this album, as well as the otherwise sterling cover of Bob Dylan’s “My Back Pages;”  only moderately successful as a single, that track provides a deliciously tranquil closing to a uniformly impeccable track sequence offered by reprogramming the expanded CD of 1996.

The Byrds’ star had been waning for a year or more at the time Younger Than Yesterday was released and the devolution of their career, at least sales-wise, continued with the next (and arguably superior) album The Notorious Byrd Brothers. David worked on that record to some degree–”Dolphin’s Smile” and “Draft Morning” are actually two of its standouts—but not without some friction the likes of which resulted in his summary dismissal by McGuinn and Hillman.

The subsequent sequence of events only certifies the influence of the Byrds on contemporary rock, including but hardly limited to, the seminal country-rock hybrid that is 1968’s Sweetheart of the Rodeo, featuring the late Gram Parsons. Hisenlistment for an abbreviated tenure with the group preceded a peremptory departure with Hillman to form the Flying Burrito Brothers, after which the evolution of the Byrds continued apace: in a realigned form, only McGuinn remained from the original personnel, yet those lineups’ best work allowed the Byrds to regain much of their early cachet as a rock and roll band equally knowledgeable and reverent of their roots.

Accordingly with over a half-century of hindsight, it’s easy to hear The Ballad of Easy Rider and Dr. Byrds &Mr. Hyde, among others,  as viable extensions of the latent momentum (barely) contained within Younger Than Yesterday. 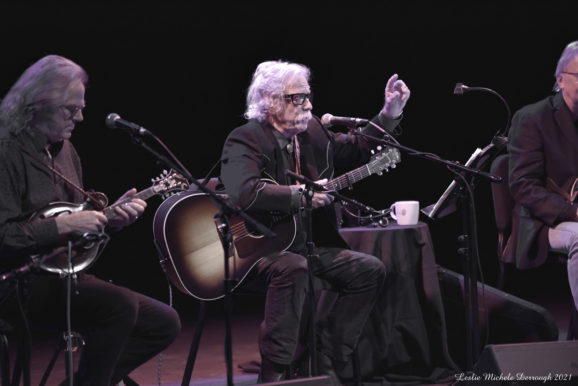