Mestizo, his fifth album as a leader, may well be rising saxophonist/composer/arranger/educator Diego Rivera’s crowning achievement to date. The Michigan-born and raised and now Associate Director of Jazz Studies at Michigan State University delivers his third album as a leader for Posi-Tone and has found a home there both for his solo projects and as a valued sideman. He is the lone horn on Posi-Tone’s Mingus tribute, Blue Moods, issued in January with this same core rhythm trio of pianist Art Hirahara, bassist Boris Kozlov (who released his own album last month covered here) and drummer Rudy Royston. Joining Rivera on the front line for this quintet is the fiery trumpeter and label mate Alex Sipiagin. Eight of the ten compositions are originals with a cover each of Wayne Shorter and Kenny Dorham.

The opener, “Battle Fatigue” was composed in April of 2021, mere moments after Derek Chauvin’s conviction for the murder of George Floyd. Rivera immediately launches into a feverish flight behind the vamping of this potent rhythm trio followed by a more deliberate turn from Sipiagin that also builds in intensity. The tune is a declamatory statement against racism and prejudice. Rivera’s roots as a Chicano imbue several tracks, the first being “Rasquache,” named after the term Rasquachismo, which describes Chicano originality, creativity, and resourcefulness. In short, it is a celebration of the Chicano survivalist attitude, played beautifully by Sipiagin who colors his lines with Mariachi tinges, and Royston who lays down masterful Latin percussion. Later, “Most From The Least” extends this concept with Royston, Hirahara, Rivera, and Sipiagin each firing off blazing riffs around the modified 12-bar blues.

The tempo slows for Shorter’s emotive ballad, “Teru,” which first appeared on Shorter’s 1966 Adam’s Apple. This is one of the more simply structured Shorter tunes, folk-like in its melody, and rendered so sweetly by this unit, as Hirahara, and Rivera takes gorgeous turns as Sipiagin sits this one out. The quintet takes Kenny Dorham’s “Escapade” in a 12/8 Afro-Cuban arrangement reflecting the bent that Dorham and his main collaborator, Joe Henderson, had for Latin music. So, Rivera and Sipiagin with their own bold solos. relive the Henderson-Dorham front line tandem through Rivera’s arrangement of the piece.

“Brachero” serves as a history lesson on sorts. The term means “manual laborer’ and references The Bracero Program of 1942 which addressed a labor shortage in the U.S., thus the agreement to import Mexican labor during WW2. The composition tells the story of the bracero’s journey, first through a thematic melody, the optimistic section in the bridge dreaming of a better life, and finally the work-like chant as it goes out.

While that tune references history, the inspiration for “Cancio De Cuna” is the current troubling situation of families separated at the border. It reads a bit like a lullaby as Rivera envisions his tenor as singing melancholy lines to her child’s empty crib while Sipiagin’s robust flugelhorn carries the voice of a weeping child singing themself to sleep alone. At the end, the horns lock in unison as they both drift off, hoping to see each other in their dreams. Hirahara is so adept in these ballads with his shimmering fills.

The last three compositions are deeply rooted in Chicano culture as well. “La Raza Cosmica” is inspired by Jose Vasconcelos’ controversial 1925 book, translated as “The Cosmic Race,” wherein blending people from all over the globe would create a fifth race, thereby voiding any importance placed on color. Chicanos eventually reclaimed what was once a derogatory term, mestizo, and now treat it as a celebration of culture. There are lots going on here where the vamp is ambiguous, somewhere between major and minor as the rhythm section lays down a healthy groove which both Rivera and Sipiagin soar above. When stating the final theme, the idea is more solid in form, connoting being wiser and more developed.

“The Rose Window” is a reference to a 1775 sculpture located at the Mission de San Jose Catholic Church in San Antonio, TX. The melody came to Rivera when approaching that historic window for the first time. The yearning in the melody is chilling and proves also to be a great vehicle for Sipiagin’s tender flugelhorn and the leader’s warm tenor. Finally, the title track is Rivera’s defining cultural statement, indicating, as he has throughout, that Mexican American, Indigenous, African, Afro-Latin, and straight-ahead jazz can coexist in one cohesive statement. To reinforce that notion, Royston begins with a drum solo to emphasize the importance of rhythm followed by Kozlov stating an R&B, Motown-like groove, with the unison lines echoing both blues and straight-ahead swing as both horns go unleashed, in the way the album began except that joy replaces anguish.

This highly conceived album is a masterpiece that should catapult Rivera into a whole new level of conversation not only about saxophonists but about the best of our contemporary composers and arrangers. 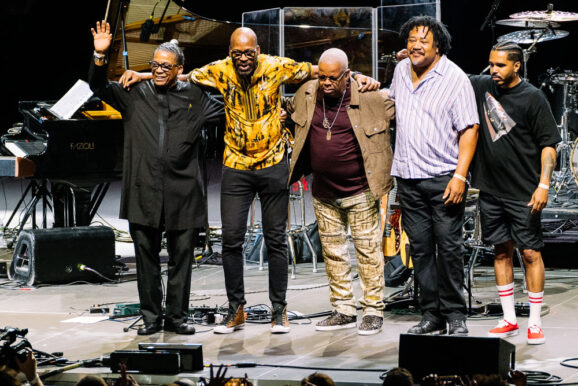