Just as the eponymous debut of Hot Tuna created the template for the Jefferson Airplane offshoot in its acoustic format, the fifty-year-old third album by the group, Burgers, defines the band in electric form. Its very first track “True Religion” actually contains all the elements that would reappear throughout this first studio record of the group’s and, if it weren’t so infectious in and of itself, the opener might suffice to confirm the motivating instincts motivations of founding members bassist Jack Casady and guitarist/vocalist/songwriter Jorma Kaukonen.

But in building upon previous studio experience to act as producer, Kaukonen managed to focus the virtues of Hot Tuna for the purposes of a well-wrought LP. The group largely reins in its proclivity to stretch out and jam, but the double-time section of the aforementioned first cut hints at those capabilities. On “Highway Song” and “Ode for Billy Dean,” the guitarist exhibits his growing skill as a songwriter and a singer, while “Water Song” and “Sunny Day Strut” are evocative instrumentals that supply significant substance to an album that would otherwise seem slight. More significantly, the two latter cuts fully display the uncanny chemistry between the two principals: the respective effects of Kaukonen and Casady’s interplay are as uplifting on the first as they foreboding on the second.

The aforementioned original tunes reside comfortably next to blues and gospel covers the likes of which populated the two previous concert albums. Rev. Gary Davis is the composer of “Let Us Get Together Right Down Here”–the same man whose “Keep Your Lamps Trimmed and Burning,” among many others, appeared on the Tuna debut, while Julius Daniels’ “99 Year Blues” gets an updated arrangement with drums by Sammy Piazza. Also returning from the previous release, First Pull Up, Then Pull Down (and a stint in the latter-day Airplane), violinist Papa John Creach helps imbue “Keep On Truckin’” with a quirky twist in keeping with a decidedly contemporary reading.

Following in the footsteps of harpist Will Scarlett on the initial Hot Tuna release ( (eventually available as a two-CD set in 2012), Nick Buck’s piano on the latter track continues the Tuna tradition of open collaboration with other musicians. It’s one that would continue for the life of the group and include stringed-instrument wizard Barry Mitterhoff in the 2000s as well as slide guitarist extraordinaire Greg Douglass on a summer 1975 tour (see https://glidemag.wpengine.com/152303/hot-tuna-2/): the presence of this former member of The Steve Miller Band was a harbinger of Hot Tuna’s so-called ‘metal years,’ but the early integration of acoustic and electric instruments is first on full display during Burgers.

Enhanced production values including strings would embellish a similar approach for The Phosphorescent Rat, after which the band functioned more or less as a power trio, even in the studio: for  America’s Choice, Yellow Fever, and Hoppkorv,  Kaukonen continued to hone his penchant for angular melodies in his songwriting even as he and Casady experimented with their equipment; in doing so, Hot Tuna mastered the niceties of recording and simultaneously learned how to integrate their now well-honed predilection to improvise into arrangements, sans aimless self-indulgence.

This pair of long-time friends hit their stride as musicians as members of JA, not coincidentally right around the time they formed this group of their own. But Burgers represents the point where an ongoing personal and professional partnership of over fifty years rose to another level altogether. Playing as two but thinking as one– or perhaps more accurately, functioning as alter egos of each other —this is the sound of two musicians who have become experts in anticipating and complementing one another. In forging this bond, Jorma and Jack are rightly regarded among the premier practitioners of their generation on their respective instruments

After a short hiatus in the late Seventies and early Eighties, the twosome reunited under the aegis of their tongue-in-cheek moniker for shows and records including Pair A Dice Found and Steady as She Goes (produced by Larry Campbell). And while Kaukonen and Casady now eschew the speed-skating sojourns upon which they regularly embarked in the Seventies, they still radiate a palpable sense of continuous rediscovery, playing in a variety of formats on the road as well as participating in all manner of events, educational and otherwise, at the former’s Fur Peace Ranch music compound in Ohio.

The flash-point of influences ignited on Burgers a half-century ago is proof positive how fertile this ground was when they first staked it out. 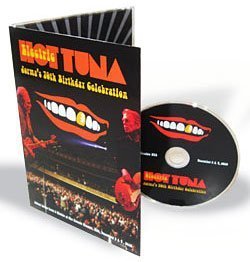