With quarter-century hindsight, U2’s Pop (released 3/3/97) takes on more significance than it had at the time of its original release. Or in the interim immediately following for that matter. Looking back on its recording as well as the public perception around 1997, the group’s ninth album would foreshadow the protracted processes of composing, performing, and producing latter-day efforts including No Line on the Horizon, Songs of Innocence, and Songs of Experience.

To be charitable, U2 began with the best of intentions in 1996, that is, to formulate a sound as distinctive as its well-established style, but decidedly different from it. Thus, the group—minus drummer Larry Mullen, Jr., who was recovering from back surgery—began to experiment with many of the same electronics of sampling and looping, as well as dollops of dance, techno, etc., much of which they had utilized for 1991’s Achtung Baby. Laying the groundwork for the new collection were a few songs already at hand, a foundation that eventually blossomed into some thirty to forty pieces from early sessions.

Yet the continuous experimentation by the group and its producers—Flood, Howie B, and Steve Osborne—was not unprecedented. U2 had taken risks before that had (more or less) paid off, as on 1988’s Rattle and Hum, for instance, the band rightfully (but no less bravely) relying on the groundswell of acclamation that hit its first peak with War in 1983,  rose to an even higher level with The Unforgettable Fire just a year later, then only to ascend further in 1987 with The Joshua Tree.

These feisty Irishmen certainly had a following loyal enough to listen even if they did not sound exactly like ‘themselves’ as they’d come to be known. Still, Pop is a stretch for fans and dilettantes alike; listening on headphones isn’t absolutely necessary to enjoy the tongue-in-cheek(?) titled record, but it is especially insightful–not to mention more than a little titillating—because it’s easier to hear the small production touches and appreciate the density thereof.

Of course, that’s not to deny the clutter that’s so often evident on a number like “Mofo.” Nor does it arrest the monotony that threatens to sink in and stay on “Do You Feel Loved.” But it’s also a fact the collective personality of the band forces itself to be heard on “Discotheque:” hear the inexorable emergence of The Edge’s quick guitar riffing and the muscular rhythm section of Mullen and Adam Clayton. The latter, in fact, supply the most fully pervasive components of the U2 sound as the dozen tracks progress;  by the time “Miami” and “The Playboy Mansion” appear, the mountainous bass and drums rival Bono’s voice for prominence.

It’s also near this point in the track sequencing that intrusive beats subside in favor of a slightly more sustained melody. During “Staring at the Sun” and “Last Night On Earth,” the confusion and melancholy in the lead singer’s phrasing becomes paramount, even as acoustic guitars (occasionally treated with sonic effects) become the lead instrument on tracks like “Please.” Credit where credit is due U2 for trying something novel, but what they really ended up doing, intentionally or not, is portraying their own lack of direction in music: “If God Will Send His Angels” is virtually the only cut here with a genuine purpose brought to fruition.

There is, however, a definite evolution to Pop, even if it only fully manifests itself near its conclusion. “Wake Up Dead Man” might well be Bono singing to himself and his bandmates as if to rouse them all to face a pending apocalypse, in this case, an artistic one. Subsequent mixes labeled ‘Big Yam’ and ‘Hexidecimal’ on future compilations such as The Best of 1990-2000 only point up how there’s only so much to be accomplished with additional work on any given piece: past a certain point in the creative process, the result may well be different, but it won’t necessarily be any better.

And that might be a good way to describe the creative arc of Achtung Baby, Zooropa, and Pop. With the retrospect of twenty-five years plus, the mixed results are all too obvious, though U2’s labors seem all the more laudable. That said, the quartet wouldn’t wholly absorb all the lessons to be learned, despite the fact, such tortuous process(es) did foster distillations of inspiration on 2000’s All That You Can’t Leave Behind and, four years later, How To Dismantle An Atomic Bomb: on those LPs, the purely physical (and not inconsiderable) power of the foursome’s playing and singing superseded the intellectual conceits of their predecessors. 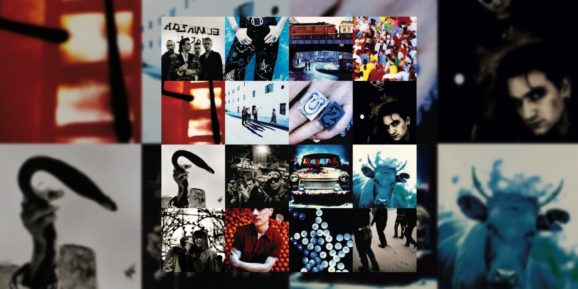