Little Feat’s Time Loves a Hero was released forty-five years ago (4/15/77) and, strictly on its own terms, it’s a fine record. Yet with the benefit of extended hindsight nearing a half-century, it does sound markedly different because it so clearly reflects the band’s (d)evolution. Internal friction had been reportedly plaguing the group since 1974’s Feats Don’t Fail Me Now, but this is the record with the most tangible evidence of one-time titular and creative leader Lowell George’s recession from prominence in the band. And that’s even in comparison with his ostensibly diminished status within the unit based on the prior LP, The Last Record Album.

The inexorable process of estrangement continues in even more stark terms with this sixth studio album. The former Mother of Invention sings lead on just two tunes, outlaw country songwriter Terry Allen’s “New Delhi Freight Train” and “Rocket in My Pocket,” only the latter of which Lowell wrote himself. Both still exhibit the throaty, blues-derived vocal delivery that, by rights, should not mesh with the song’s quirky, stuttering basic rhythm (comparable to the absurdist wordplay of the lyrics). Yet mesh it does, thanks in large part to the bond of bassist Kenny Gradney and percussionist Sam Clayton and the sure-handed means by which they bond with and embellish their rhythm partner Hayward’s second-line influenced drumming (the singer’s laconic drawl in his singing further mirrors the New Orleans influence).

Perhaps even more telling in the context of Little Feat history, Time Loves a Hero was produced by Ted Templeman rather than Lowell George. The presence of the Warner Bros. record label staffer who’d also worked on records by Van Halen and the Doobie Brothers no doubt accounts for the polished sound of the music, some of which, like “Red Streamliner,” overtly echoes the sound(s) of the latter group (two of whose members supply harmonies Michael McDonald and Patrick Simmons). Such was the marked left turn toward homogeneity in place of the eccentric creativity that so thoroughly permeated the group’s work since their eponymous 1971 debut as a quartet, but it was hardly a mystery: the axis of influence in the band had now swung further to the co-composer of that latter tune, keyboardist Bill Payne, as well as guitarist Paul Barrere.

The latter’s solo writing contributions such as “Hi Roller” and “Missin’ You,” were, like his bandmate’s, no more or less than close approximations of Lowell’s unconventional approach to composition. And it was this pair, sans contributions from Lowell, but along with the other instrumentalists of the sextet, who composed a jazz-rock fusion piece titled “Day At The Dog Races;” George would subsequently refuse to play on stage during the group’s concerts, so the instrumental tune would become a conundrum for a band whose style had already shifted dramatically from the country/folk/blues/rock amalgam of its first two albums to a mode particularly reminiscent of vintage Meters via the third LP (with realigned membership), Dixie Chicken. Yet even as the music belied its prior originality, the cover art  by Neon Park maintained continuity with Little Feat’s idiosyncratic artistic oeuvre, one previously established with the second LP Sailin’ Shoes, home for what should’ve been the group’s pop hit, “Easy to Slip.” The group never broke out of its unfortunately limited popularity, though, a niche from which the ensemble and its the label strove so assiduously to emerge but ultimately failed.

The band did develop a cult following, however, one that solidified over the years following the passing of their titular leader in 1979. Various configurations ensued in the wake of George’s death as the group soldiered on through sporadic periods of activity, interspersed with various solo projects. Perhaps it’s not surprising that Payne now sees The Feats as more stable than ever, even with the 2010 passing of stalwart drummer and charter member Richie Hayward; the recent recruitment of guitarist Scott Sharrard, he of the late Gregg Allman’s solo band, shores up more ample evidence of that confidence, as does a current concert tour on which the group (with special guests) plays the live album of Waiting For Columbus.

Still, that ambitious endeavor aside, it’s further evidence of the missed opportunities that plagued Little Feat early in its existence that enough material was originally taped for that concert release to come out as a triple LP. Marketing reasons kept it to a double album upon release in 1978, but three of the unused tracks were included on their 1981 anthology album Hoy-Hoy!, while all the ‘outtakes’ were eventually released on the 2002 Rhino Records “Deluxe Edition”  package; that two-CD set presents a vivid portrait of this most unorthodox band at its peak on the stage, nearly a half-century since the ironically-titled Time Loves A Hero. 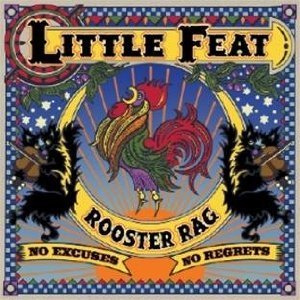