One of the many benefits of going to music festivals is that there is so much music that you get to check out a ton of unknown (to you) acts and you usually “discover” a band that you really love. Such was the case for Dorothy first discovered at the 2018 Voodoo Festival in New Orleans. But a few missed gigs and a Pandemic put a crimp in seeing their show again. But on Friday night April 15th at the Wellmont Theater in Montclair (NJ), fans finally got to scratch their Dorothy itch at a NYC area show, the 18th stop of the band’s 40-stop tour to promote their new Gifts From The Holy Ghost release. They were joined by two other LA bands, Classless Act and Joyous Wolf.

The crowd shuffled in fairly early as they had been anticipating this show for some time. As with a lot of hard rock bands, the crowd skewed older and seemed to be dressed in one of two outfits: a black tee shirt from their favorite band (notably Dorothy) or bar (especially the Hog’s Breath Saloon), or something studded and leather.

Dorothy got right to it and started vamping the bass and drum thumping intro to “Down to the Bottom” and the crowd erupted as lead singer, Dorothy Martin, strutted onto the stage in her signature liquid black leather pants and halter top decked out with a combination of chrome and bling. She stepped up to the mic and kicked off a 12-song mutual lovefest between her and each of her adoring fans.

The set relied heavily on 2016’s Rock Is Dead album (“Gun In My Hand”, “After Midnight”, “Raise Hell”, “Medicine Man” and “Dark Nights”), but also featured three songs from her 2018 release 28 Days In The Valley (“Flawless”, “Freedom” and “Ain’t Our Time To Die”). The set was relatively fast-paced, with very little time in between songs – just enough to exchange a number of “I love you finger hearts” between Martin and many members of the crowd.

Although Dorothy has all the trappings of a metal or hard rock band, their music could be more accurately described as “hard blues”. It looks like hard rock and feels like hard rock, but most songs have an accessible blues sound and feel to them. And even though Martin’s voice is quite powerful, most of the songs come off as more ballad-like than metal-like. At no time was this more apparent than during the fifth song of the set in which the band performed a very bluesy version of the Eurythmics’s “Sweet Dreams” – not exactly a hard rock standard.

Dorothy did share two of their new songs, “What’s Coming To Me”, which features a strong backbeat and impassioned vocals that have a theatrical feel (like an Evanescence song), and “Rest In Peace”, a ballad that showcases the grittier side of Martin’s voice and has some country undertones. Both songs are slated for the album, Gifts From The Holy Ghost, which is planned for release in a few months.

Two of Martin’s comments illustrated their “happy to be here” sentiment as she told the crowd that this has been her favorite show of the tour. Later in the set, she drove that point home by saying, “it’s a crazy thing to put together a rock band, but I promise you there are times like right now when it is a lot of fun.” The band finished their set with the hard-hitting encore, “Dark Nights” which made the “hard blues” genre even more clear.

One of the many benefits of showing up on time to catch the opening acts is that you usually get to “discover” a new band. And the two openers did a great job of kicking off the evening. Classless Act, a rock band that formed in 2018 in LA, started the night off. As they walked on stage there was a little visual head-scratching as the five band members looked like they came from five completely separate bands, but once the music started, they delivered quite nicely. Lead singer, Derek Day’s vocals were strong and sounded like he had been raised on a steady diet of heavy metal. The band played mostly originals and moved around the stage with urgency and passion consistent with the genre. T

Joyous Wolf, another Southern California rock band, next took the stage and raced through their frenzied 50-minute set. The band fits nicely into the bill as their sound is a nice mix of hard rock and growly blues. Although all the musicians in the band were solid, particularly bassist Greg Braccio, it was impossible not to stay focused on the lead singer, Nick Reese, who gyrated and flung himself all over the stage. Dressed in a black eyelet suit, he performed at least eight acrobatic round-offs and numerous spins and splits, without missing a lyric.

At one point Joyous Wolf started jamming and he got the audience to clear a path as he leaped off the five-foot-high stage and vaulted over the photo pit to the concrete floor of the Wellmont Theater. While there, he did several round-offs and spins up to the soundboard and scrambled back up to the stage just in time to deliver the next lyric. This was quite the theatrical opening act and then some for a theater performance. 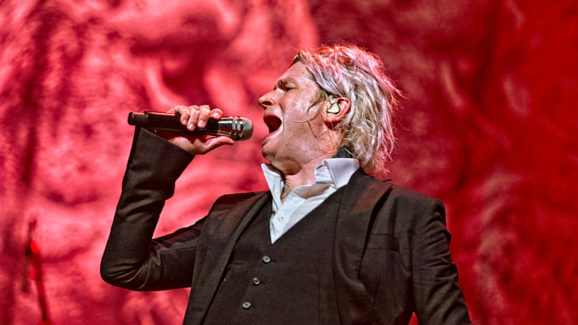 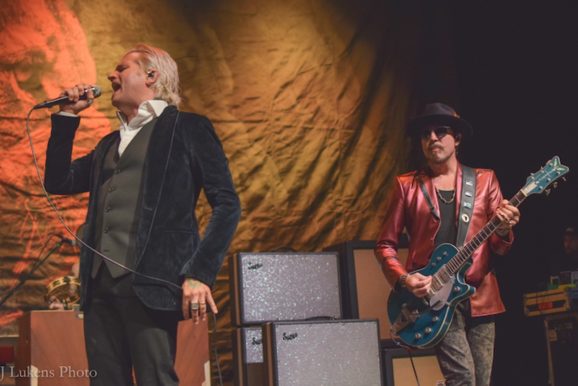