Tedeschi Trucks Band Delivers First of Four Albums in “I Am the Moon” Series with ‘I. Crescent’ (ALBUM REVIEW)

By now you likely know that The Tedeschi Trucks Band is undertaking their most ambitious project to date. Their “I Am the Moon” series promises four individual albums, each in the 35-40-minute range, released roughly at monthly intervals, each preceded by a film premiere. The concept behind I Am The Moon, the band’s fifth studio recording, was suggested by vocalist Mike Mattison in May 2020, two months after the band shut down touring due to the pandemic. The 12th-century poem Layla & Majnun by Persian poet Nizami Ganjavi was the title inspiration for Eric Clapton’s 1970 double-LP with Derek and the Dominos, Layla and Other Assorted Love Songs – an influential album for TTB, who issued their own version of the classic in 2021, covered on these pages.

In terms of the films,  I Am The Moon: The Film was heavily influenced by Pasaquan, an artistic project founded in Buena Vista, Georgia by folk artist Eddie Owens Martin (now known as St. EOM). Over three decades of work, Pasaquan features “six major structures, mandala murals and more than 900 feet of elaborately painted masonry walls.” Trucks was introduced to Pasaquan by his late mentor, Col. Bruce Hampton.

Crescent begins with the warm, mellow sound of “Hear My Dear,” penned by Trucks, Tedeschi, and Dixon with the latter two on lead vocals over a bed of organ swells the full band, and the twice repeated chorus amidst Trucks’ signature slide – “Hear my dear it’s your melody/So sorry it took so long/I was lost in the wilderness/And that’s where I heard our song.”  “Fall In,” written by Mattison who takes the lead vocal, also features the full ensemble in an edgier, but a celebratory song with stomping rhythms.  As we get into this, it is clear that Mattison’s challenge to the band to view the poem from a different perspective than Clapton becomes immediately apparent. You can decide if it is Layla’s point of view or Majnun’s.  Assigning a view to some of these lyrics is guesswork – “The wigglation in his walk/The Cincinnati in your sway/And we ramble ’til the break of dawn/Fall in.” The sonics features some stirring work from Trucks on both electric and National steel.

Gentle acoustic guitar strums introduce “I Am the Moon,” penned by Dixon who harmonizes with Tedeschi in the lead, with the full crew of vocalists chiming in on the indelible chorus “I Am the Moon,” igniting a searing lead from Trucks. “Circles “Round the Sun,” by Greenwell, Tedeschi, and Trucks is more forceful with Tedeschi in her best wailing form against a dense backdrop of keys and guitars.  Yes, while the previous three revealed a gentler side of the band, this one flat-out rocks until we hear the spoken dialogue from St. EOM for whom the closer, an epic 12-minute instrumental, is named.  It’s rendered simply by the quartet of Trucks, Dixon on B3, Boone, and Greenwell. As expected, it showcases the phenomenal spiraling, stratospheric guitar of Trucks. Dixon nearly matches his intensity with a rollicking organ solo before passing the baton to a frenetic Greenwell, which then leads to an odd, reverberating pause before Trucks gathers and builds a furious crescendo, which results in an explosive climax as the other three chime in, leaving nothing in the wake save the last powerful chord just fading out.

TTB, as expected, is off to a flying start. The project launches with the first episode, I Am The Moon: The Film – I. Crescent on Tuesday, May 31st at 6:00pm PT/9:00pm ET on the band’s YouTube channel. The album will release on June 3rd. 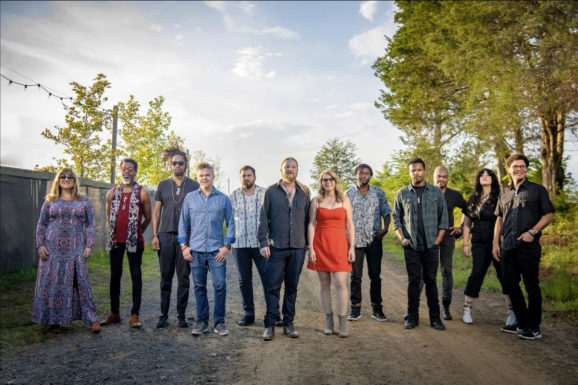