Moby Grape’s career is “Murphy’s Law’ in action, so much so it transcends other archetypal stories of  fledgling rock and roll bands for whom ‘what could go wrong will go wrong.” The bungling all began even before its eponymous debut album was released fifty-five years ago when the group itself committed the cardinal sin of signing away rights to their creations (as well as their comically cryptic name). Not long after, well-laid but intrinsically unsound promotional plans of their record company gave way to even more unforeseen personal adversity, all of which was in stark contrast to the unflagging confidence the quintet radiated in the baker’s dozen versatile performances on their first album.

It’s a mature piece of work that belies the group’s abbreviated history together: they had been formed but six months prior to entering a recording studio. The efficiency and productivity of recording Moby Grape belied everything that otherwise went awry around it: the project took just six weeks, and $11,000 to record all thirteen tracks (while another song, “Rounder” was also recorded, but without lyrics or vocals). The end result is a gem from start to finish, as ebullient as it is seamless in its composite of folk, country, blues, and rock. And the psychedelic overtones hearken to the ‘Summer of Love’ in which the album was issued, yet without dating the music at all.

As fully in evidence on the very first cut, “Hey Grandma,” the unflagging exuberance permeating this record is comparable to that zest pervading the work of none other than the Beatles when they hit their stride on A Hard Day’s Night. Besides containing original songs from each of the five members, and in addition to inventive group harmony singing on cuts including “Fall On Me” and the various lead vocals are as distinctive in their own way as the individual styles of lead guitar work by Peter Lewis (finger-picking) and the aforementioned Miller (staccato blues). Acoustic and electric instruments mesh as completely as the counterpoint and contrast of the lead and background vocals on “805.”

Meanwhile, Skip Spence—one-time drummer for Jefferson Airplane and collaborator in founding the band alongside manager (and future business nemesis) Matthew Katz—inspired the band early on in more ways than one: his enthusiasm was unflagging early on–most clearly in evidence during the effervescent “Omaha”–but also in the way his guitar work locked in with drummer Don Stevenson and bassist Bob Mosely. In addition to their other contributions, the natural solidity of the rhythm section also maintained the fleet thrust of the ensemble: the changes the group navigates during “Indifference,” in addition to the instrumental ride-out, hints at the collective predilection to improvise on stage (see 2010’s Moby Grape Live).

Clearly, Moby Grape’s was a wealth of talent in which nothing of value went to waste, at least on this first LP. In the form of carefully-tailored arrangements like that of “Come In The Morning,” this band proffered tracks with as much (or more) hit potential as other releases of the time by, say, the Buckinghams or the Association. But Columbia Records’ simultaneous issue of five singles from the long-player (plus an over-the-top release party) was an effort of unprecedented hype at a time such publicity engendered skepticism in the cognoscenti, influencers of the era both the band and its label were eager to win over.

Ameliorating the situation somewhat, at least early on, was the designation of David Robinson as their producer for the debut album–he of studio work with jazz-icon-in-the-making Herbie Hancock, the Pointer Sisters, Santana, and Taj Mahal. But a further faux pas in the form of a misconceived press party, plus the ignominy of band member’s arrests soon after the record came out only followed some outrage over famed photographer Jim Marshall’s cover photo: Stevenson was flipping the finger and not all that surreptitiously. In the end, the not inconsiderable lengths to which the prestigious record company strove to win a bidding war to sign the band were effectively squandered and the momentum behind Moby Grape the band never matched that within Moby Grape the LP.

In fact, with the possible exception of Buffalo Springfield’s own debut, few if any other contemporary albums of the time could measure up to this one in terms of the consistent quality of material and musicianship (and the latter suffers tremendously for its audio quality). It’s superior in comparison to early efforts by peers including the Grateful Dead and Jefferson Airplane and, strictly in terms of debut albums, this self-titled record also transcends the initial release by The Doors, often lauded as the greatest of its kind during its (or any) epoch of popular music.

The Grape’s performance at the Monterey Pop Festival might’ve turned the tide of ill fortune, but instead only continued it. The quintet’s opening of Saturday’s festivities was rescheduled by the promoters in response to the aforementioned Katz’ outlandish demands for the film footage of the performance to be included in the movie of the festival. As a result, the winning and infectious assets of the Grape’s tight set were lost to most attendees except the earliest arrivals in an assembly that would later bear witness to the legendary theatrics of the Who and Jimi Hendrix (on which Sunday the band was originally set to play).

As detailed in various written accounts of the Moby Grape saga, but most comprehensively in Cam Cobb’s 2018 book What’s Big and Purple and Lives in the Ocean?, that egregious mistiming was a precursor of more unfortunate events as well. The record company hurried the fivesome back into the studio, again with Rubinson, but, at his request, in New York City instead of the more amenable West Coast environs that nurtured the ensemble’s congregation. Outside their collective comfort zone, Moby Grape lost its shared sense of focus both inside and outside the studio and, based on wildly divergent personal and professional circumstances,  the tightly-knit amalgam of versatile talent that gave birth to the eclectics of the first LP dissipated in the sessions for WOW/Grape Jam. (In an instance of woeful irony, the album was nominated for a Grammy in 1969 based on its surreal cover art).

Columbia’s marketing wisdom compelled the set to be sold for just over the price of a single LP. But the damage had already been done to Moby Grape’s reputation and integrity because, when the sophomore work came out less than a year after its predecessor, memories of the early debacle(s) remained fresh. By that time, even as the initial LP had sold well for such an inaugural release, Skip Spence went his own somewhat errant way (not wholly by choice) during the course of the coming months: he was able to complete his own fairly famous solo album called Oar. Due primarily to health issues, he was then only intermittently to ever work again with the four others in the wake of the Big Apple fiasco, et. al.

The over-produced stylistic morass into which Rubinson and the musicians descended on Wow afflicted even the sole tune to recall the penetrating intimacy of the prior effort. As included in the splendid Listen My Friends anthology, the alternate take of “Bitter Wind” is Mosley’s vivid tune in its purest form, a foreshadowing of his later prolific contributions on two subsequent records, each of which is outstanding on their own terms. Variations on the themes set out on the debut recordings as a quartet resulted in the excellent Americana-styled Moby Grape ’69 and, later that very same year, Truly Fine Citizen (the latter in Nashville with Dylan’s producer of the era, Bob Johnston).

Various management snafus continued, however, most seriously damaging of which was Katz’ assembly of a faux road entourage. The end result of such errant machinations was exactly the kind of misperceptions both the musicians and the record company had rightfully wanted to avoid but nevertheless fell prey to, despite all their (scant?) best intentions. The lack of a clear-cut and widely-appealing image was (and is) anathema to the widespread popularity this extraordinary band deserved. But in testament to the fundamental chemistry at work within Moby Grape, the various members have soldiered on in a variety of forms since (often under different names), actually reuniting its original personnel lineup for 20 Granite Creek on Reprise Records in 1971. Meantime, the band has performed live sporadically–oftentimes in later years following Spence’s passing with his son Omar– including on special occasions such as the Summer of Love 40th Anniversary Celebration in San Francisco’s Golden Gate Park in September 2007.

It was later that year the group’s five original albums, appended with bonus material, were reissued by Sundazed Records, home of the aforementioned collection of concert content (issued coincidentally with the previously-reference Legacy Music compilation). But, in a continuation of ongoing legal skirmishes initiated by Katz (including the very rights to the band’s name), the first two were withdrawn from the marketplace in less than a month. Nevertheless, they are worth searching out if only because, in the case of the first, the five additional cuts illuminate the essential strengths of the original personnel: the tight muscular musicianship comes into greater focus on the instrumental of “Rounder,” while the full-throated group harmonies are even more prominent on this take of “Looper.”

Ironically, the aggregate of deterrence to a bonafide breakthrough this fivesome encountered renders all the more stellar that vintage work of more than a half-century. It’s a testament to its potency that the mythology arising around the record (and its creators) does nothing to taint, much less undermine, the incandescent power of Moby Grape. 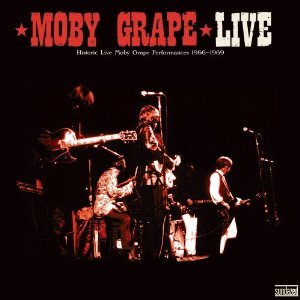 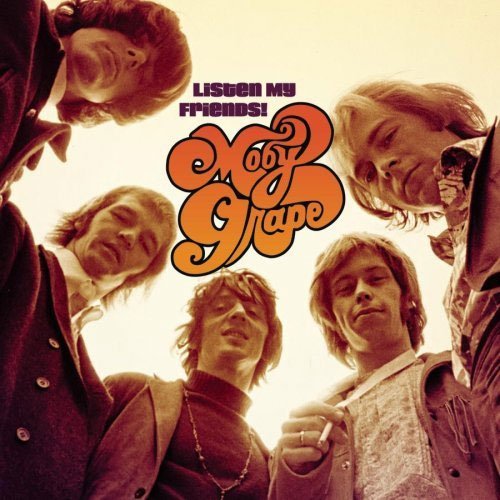 Moby Grape: Listen My Friends! The Best of Moby Grape