The Jazz Mandolin Project Does The Jungle Tango

“That was the craziest song we’ve ever done” announced an exasperated Jamie Masefield from the stage. After bringing the song to a territory where most live improvised music intends to reach, but seldom attains, the result was simply stunning. Masefield tells the crowd, “that was only the third time we’ve played that song, and we don’t really have a name for it yet.” Scratching his head he ads, “by the way, if anybody has an idea for a name and felt something while listening to it, write it on a piece of paper and give it to the guy at the table in the back,” while pointing to the merchandise booth. Once again, another full circle example of the spontaneous energy The Jazz Mandolin Project propels.

This particular evening is the CD release party for The Jazz Mandolin Project’s newest recording, rightfully titled Jungle Tango, that was released nationally on March 25th. An exciting karma fills the air as the band and audience find themselves equally excited to reopen another chapter in The Jazz Mandolin Project. This edition features along with Masefield on mandolin -Danton Boller on bass and Danny Shapiro Weiss on drums – a monster on the skins that has added a fresh carnal force of energy to the trio. Trumpeter Matt Shulman joins the band for the first time live and invigorates the overall sound to incorporate psychedelic vibrations of feedback and echoes by supplementing his vocal chords towards flourishing the overall sound to a sum, clearly larger than its parts.

In between songs, Masefield greets the fans and reminds them that, “you’ll only be able to find Jungle Tango at the cool record stores, the un-cool stores won’t have it.” Jungle Tango spawns from the same exact recording sessions of the band’s prior release After Dinner Jams, released in 2001. The sound incorporates themes of trance, bass, drums, fusion and jazz, built around the mandolin that confidently allows you to say – “this is nothing like I’ve ever heard before.” Masefield, even goes on further to proclaim, “this is the most significant thing I’ve done.”

Engineered by John Siket (Phish, Dave Matthews Band), the accomplished recording fits snug within a 46-minute package . Rather than confronting us with the power trio – of records and tours past, Jungle Tango is a five-man effort with resourceful contributions from Gil Goldstein (Pat Metheny) on the piano and accordion, and percussionist Chris Lovejoy (Charlie Hunter Band). The recording is beyond jazz. It’s beyond anything you might have heard with a mandolin based sound. It grooves, funks, fuses, swings, dances, bounces, jams, laughs, and bangs while maintaining a sense of cohesiveness and adventure within an improvisational spirit.

Masefield explains the process behind the evolution of Jungle Tango. “We talked about…what we wanted to try and accomplish with this CD, and we talked about how there is so much music that sounds very much the same on the scene right now, and what we would sometimes consider uncreative music. I mean that on the jamband scene as well. That there is a typical sound that’s developed and you just hear it all the time. We just wanted to distance ourselves from that, and focus on…what we’ve played all these hundreds of gigs and how we’ve tried to develop our own way of improvising. That’s what we wanted to try and get on tape – this unique way we see the music and show the uniqueness of this. And not unique just because it is led by a mandolin player, not for that at all. More for the way we communicate, and the way we move through music and create a different sonic. It’s not too much like you’ve ever heard, and it could be too out there for a lot of people.”

It’s a Wednesday night, and rock icon Lou Reed is playing at the north wing of the University of Vermont campus along with ex-Ratdog bassist Rob Wasserman, who joined The Jazz Mandolin Project for a run of nine shows in September of 2000. Masefield chooses to do his own thing this particular evening rather than attend Reed’s first performance in Vermont, with a guest pass and all the experiences that come with that territory. Instead, Masefield bestows a detailed presentation to a crowd of young college students. He speaks amongst various topics, including his role as a musician and many of his extraneous experiences that have allowed him to play the music he loves for a living. He chooses to do this, down to earth, patient and sincere – Masefield tells his story to those students in attendance.

Masefield grew up in a musical household and was exposed to New Orleans jazz through Dixieland jam sessions at family functions. While in college at the University of Vermont he decided to pursue another inquisitive instrument – the mandolin – as he was tired of playing the banjo in a jazz setting, and it came easily to him because it was tuned the same as a banjo. Shortly after college, his connection with the mandolin became closer than ever imagined, while he lived on a tree farm in Vermont for nine years. This enabled him to live simply and hone his expertise of the instrument, looking for ways to innovate the mandolin from its traditional sense. 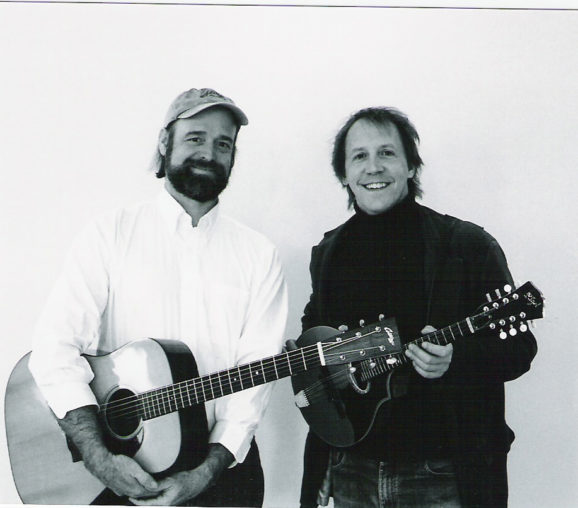 Briefly: Everyone Orchestra to Record LP