The Soul of ekoostik hookah (Interview With Dave Katz) 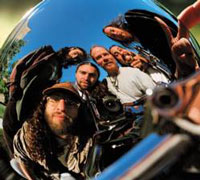 Currently, you can’t help but notice there are more summer music festivals arising than reality television shows. Although Bonnaroo is no American Idol, you can name either a band or promoter and you can bet they’ve already got something lined up for the warm months, or a jubilant weekend festival is rumored to be announced right around the corner. From Telluride, Colorado; Manchester, Tennessee; Limestone, Maine; Quincy, California; Great Barrington, Massachusetts; Mariaville, NewYork and Riverhead, New York, there is just too much good music in too little amount of time. If you had to narrow it all down, you might want to consider heading over to Kirkersville, Ohio where one of the nations finest festivals takes place biannually – Hookahville. Assembled by one of our country’s most talented do-it-yourself bands – ekoostik hookah, this festival, which began back in 1994 as a campout in band member Dave Katz and band manager Jeff Spencer’s backyard, has become a household name in a cluttered summer festival scene.

The Columbus, Ohio based ekoostik hookah has been around for twelve years, quite an achievement in and of itself within a musical environment that calls for relentless touring and three plus hour shows. The six piece band features: vocalist/keyboardist/guitarist Dave Katz; lead guitarist Steve Sweney; bassist Cliff Starbuck; vocalist/guitarist Ed McGee; drummer Eric Lanese; and Johnny “Starrcatt” Polansky on percussion. This road tested sextet plays a brand of psychedelic rock that at one time represented the majority sound of the improvisational rock movement, but now finds itself in the silent minority during these post-Garcia years. The band clings to the sound that got them to where they are today, and aren’t concerned with incorporating trendy infusions of funk, techno and hip-hop. Their sound represents more than it’s renowned epic songs, insightful lyrics and feel-good rhythm, but it reunites the traditional values of band-audience community. ekoostik hookah is a home-grown organization that, since their beginning, has independently handled every single aspect of its growth. The have their very own production company – Acoustic Productions, Inc. that ensures Hookahville is perhaps one of the most fan friendly events around, as the buzz word is “no hassles or bad attitudes.” The list of names that have graced the Hookahville stage eminently include: Bob Weir, Bruce Hornsby, Dickey Betts, John Bell, Jorma Kaukonen, Willie Nelson, Dr. John, Little Feet, Galactic, Bela Fleck and the Flecktones, Arlo Guthrie and Medeski, Martin and Wood. Along with the legends, Hookahville always includes some of today’s most promising younger acts, keeping things in the moment and relevantly packed with innovation.

Just recently, the band released Ohio Grown, their most accomplished studio recording to date, that exemplifies they are a force to be reckon with outside their legendary live performances. The album displays a number of reworked songs already witnessed in the band’s shows along with a number of fresh songs that showcases how far the group has matured as both arrangers and songwriters. With strong lyrical content and polished arrangements, this is a promising harbinger for ekoostik hookah to achieve their long overdue national recognition that they so rightfully deserve. Often left out among today’s top axe-men is lead guitarist Steve Sweeney, who is perhaps one of the most exciting, spirited and talented players around anywhere. A player who can truly tear a song apart with shredding leads that are simply breath taking. Not to mention, each of the other talented band members provide their very unique natural feel for producing inspiring music that is truly revered and a sincere reflection of each of their distinctive personalities.

This year’s Memorial Day Weekend Hookahville on May 23-25 provides two nights of music and camping, featuring ekoostik hookah along with: The Neville Brothers, Derek Trucks Band, Blue Oyster Cult, Robert Walter’s 20th Congress, Old & In The Grey, Particle and Phish’s lighting director, Chris Kuroda is on hand to choreograph the colors, sparkle the luminosity and garner effects above the stage.

We had the chance to speak with the neighborly cool keyboardist, guitarist and vocalist Dave Katz about current events, spontaneous energy, this year’s Hookahville and the band’s appeal amongst our country’s geographical music scenes.

Have your live shows provided a certain release for your fans and music lovers with the war going on?

I imagine that it’s a good thing, anything that takes your mind off it a little bit, although you certainly got to be aware of what’s going on. You don’t want people to forget or anything like that. Entertainment throughout history has pretty much been a keen thing during any time of war. Everybody just can’t sit home and be depressed about it. We just keep doing what we do and we try to stay away from impressing any of our views on anybody. We totally disagree with the people of influence coming out and laying their opinions on everybody like it really matters.

I think music plays more of an importance in people’s lives than it ever has? 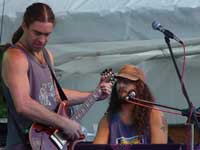 I’m sure there are people who aren’t going out right now, whether they are afraid to or they don’t’ think it’s the right thing to do, or why should they be having fun, with that going on, but I don’t think that’s the right attitude. I think you got to go out and just keep living your life. That’s the way it goes.

As a musician, what effects the way you play your live shows? Is it the feel of the venue, the audience or something else in the air?

It’s definitely…a variety of things, I mean, first of all it always starts with how you feel, which is something that you sometimes have to try and push that aside. Everyday you aren’t going to be on top of your game completely, but first you got to get past if you aren’t feeling that up to it, but yeah, the crowd certainly has a lot to do with it, sometimes the venue, but really the venue in and of itself can’t be much without the crowd. I mean you can be out playing at Red Rocks or something, but if nobody is there it’s not going to be a lot of fun. You definitely need the crowd to interact with and get a feel from what they want to hear and things like that. When we go up on stage we don’t have setlist so, there’s a lot of trying to get a feel from the crowd to see what we feel like playing, to see what we feel will go over well at that moment, that type of thing.

Definitely, yeah I notice how you guys don’t use a setlist when you go out, so for your band it’s all about the moment. Describe what being in the moment is for you?

That’s a hard thing to describe, because it’s more a feel for something than anything else. And it doesn’t always work real well (laughs). There’s definitely some dead time on stage sometimes. Sometimes a show just flows out, and other times you might sit there and think-

Mumford and Sons Announce Gentleman Of The Road Stopover 2013 Towns and Bands Including Vampire Weekend and fun.