Austin is the self-proclaimed “Live Music Capital of the World,” and as you look around town, the evidence mounts up quickly. Any night of the week live music streams from any number of bars, clubs, and entertainment venues. The state capital of Texas, the city plays host to the Austin City Limits television show as well as the South by Southwest music, film, and interactive festival. Since 2002, the fall season has brought with it the Austin City Limits Music Festival, three days of good music and good times. In 2013, the city allowed ACL to do something different by hosting the event over two consecutive weekends with mostly the same performers. So, if you heard that you missed an amazing artist the first time around, you’d have your chance to rectify the situation soon enough.

After all the media, blogs, Facebook posts, tweets, Instagram pics, and Vine vids, ACL’s 2nd weekend brought with it a hefty amount of anticipation and expectation. On Friday, Zilker Park began to fill with music lovers as the festival’s 8 stages came to life. Bands like Queens of the Stone Age, Local Natives, Savages, Arctic Monkeys and Austin’s own Okkervil River peppered the various venues, large and small, giving each particular audience the kind of musical experience they were looking for.

fun. took to the Lady Bird stage, one of two main stages found on opposite ends of the park. They, of course, played all the Top 40 radio mega-hits such as “Some Nights” and “We Are Young” from the 2012 album Some Nights.

Next up on this stage were NYC’s Vampire Weekend, followed by Kaskade, a DJ and Producer from San Francisco, on the Honda stage. The festival producers ran a tight ship and this was best-demonstrated by how well the stages stuck to their published schedules. There was potential for being disturbed by the adjacent locations of certain stages but artists kept to their scheduled sets, never bleeding into the set of who was coming up on the stage next door.

Depeche Mode was the headlining act on the Lady Bird stage. This half of the park quickly filled with fans of all ages as the band opened up with “Welcome to My World” from their latest album Delta Machine. Frontman Dave Gahan didn’t miss a beat, keeping up an amazing level of energy, spinning around and dancing from song to song for the entire set. The songs spanned their 30-year-plus career, ranging from Violator’s “Enjoy the Silence” and “Personal Jesus” to quieter moments like “But Not Tonight” and “Shake the Disease” delivered tenderly by Martin L. Gore. It was only during some of these more sparse arrangements that some some sounds coming from Muse,the co-headliner on the Samsung Galaxy stage across the park. Depeche Mode’s encore was capped off perfectly with “Never Let Me Down Again,” leaving the crowd bouncing as they headed out for the night. 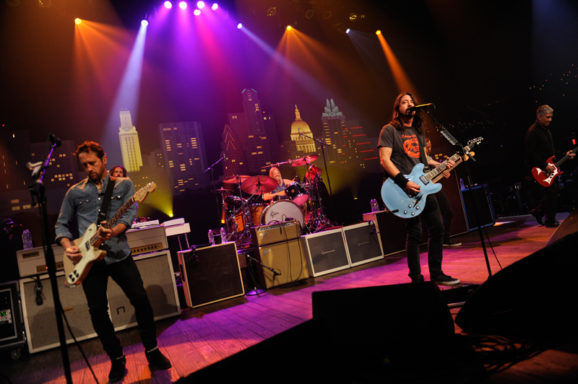