Chatty and outgoing, 22 year-old rocker Ben Kweller is a typical interviewer’s dream. Relishing the virtues of fame, Kweller is more prone to converse with random fans and press, before speaking with fellow upstart musician buddies – The Strokes, Kings of Leon, Guster or Adam Green backstage. However, due to a sudden ill-fated incident on the road, the normally congenial Kweller, sounds despondently moody during a midweek phone call.

“Man, our bass player broke his wrist the other day, so I’ve been playing by myself,” moans a bummed Kweller amidst a 43 date tour with Death Cab For Cutie. “He’s in a cast now and he’ll be able to play in a few days.”

Although easier said than done, Kweller is no stranger to rocking out solo. Performing his brand of quirky rock and crafty tunes on guitar and keyboard, it appears Kweller almost welcomes this fore lone opportunity.

“The thing is, when I moved to New York five years ago, that’s how things started to happen, just by me playing by myself. The past few nights have kind of just brought me back to my roots,” says Kweller.

Those roots are quite solid, but Kweller’s latest release, On My Way, is arguably his strongest work to date, signifying the musician’s development as a “career artist.” The record, diverse in its own right, switches off between neatly hewed songs about heartbreak, tucked right alongside fiery, spontaneous rockers. Echoing a nostalgic seventies radio vibe, this Ethan Johns produced album reminds listeners of some of the Carole Kings, Graham Parsons and Neil Youngs from a classic nugget time period.

Lyrically, Kweller’s verses are evocative and simple, yet they unmistakably draw the listener’s affinity. Songs like “My Apartment,” echoes introverted comforts of Kweller’s cozy Brooklyn residence, as he sings in his cracking shrill – “my apartment, the home where I hide/ away from all the darkness outside/ I’m there all the time.” Perhaps silly, even random references, but quite comforting nonetheless.

“Hospital Bed” bounces with a tempo-hopping bass/piano line that is comically sincere, while moving into a Beatlesque chorus. The lo-fi rockers “Ann Disaster” and “The Tules” on the other hand, rock with the dagger of former road mates Kings of Leon It’s obvious Kweller is covering diverse ground, a reflection of his varied musical tastes, but he’s also quick to admit that he won’t score points for originality, despite his signature styling.

As a sophomore album benchmark, he references he used Neil Young’s second album – Everybody Knows This Is Nowhere – as an ideal archetype. In his dark, anti-folk acoustic number, “On My Way,” Kweller strains tongue in cheek – “I want to kill this man but he turned around and ran/I’ll kill him with karate/that I learned in Japan.” Chopped and quirky, the words don’t hold the prophecy of “down by the river/I shot my old lady,” but Kweller’s music is his own excitable high, all comparisons aside.

With past opening touring spots for troubadours Jeff Tweedy and Evan Dando, and sharing band mate status with Ben Folds in the The Bens; Kweller’s musical company is not as outlandish as his own recorded work comparisons. Ironically, the piano plays a fruitful part of Kweller’s sound, another retro helping of the classic nugget singer-songwriter past. Yet he empathically notes himself rock artist first, when reflecting on his early record collection

“I didn’t even have Elton John in there. I had piano music, but I prefer Carole King. I even love Bob Dylan, and I like Cat Power’s piano playing. Even Neil, when he plays the piano, but I’m just not into Billy Joel. I’m really not that much of a piano player as I am a rock artist. Although I like the Beatles when they played the piano and John Lennon played.”

Sporting a shaggy mop-top, tight shirt & jeans combo, the young scruffy rocker often looks the part of a Dazed and Confused actor, verse well-staged captain. To that, he hopes this release is his coming out party as an artist, rather than a relic. As for the album cover art, and the sudden change from his debut depicting him innocently brushing his teeth on his debut Sha Sha to a new vintage look of him pensively strolling hilltop with a pack of wolves, Kweller offers up a humble explanation.

“Well, I’ve always loved wolves – just kind of wanted to do a John Denver feeling 1970s’ album and have a punk rock element to it, so I added the wolves.”

After founding the band Radish in his early teens, Kweller is surely moving forward with his solo releases and garnering interest from both the indie pop scenes alike. Straddling the two is no easy task, but Kweller admittedly can’t pinpoint his typical audience other than just “people who like good music.”

Wrapping up the call, Kweller excuses his wearisome demeanor on the old rocker staple – the long and winding road. So before closing, a question is snuck in about one of his other favorite past times: baseball card collecting. When asked what his best card is, Kweller suddenly turns jubilant and regains his noted energetic tone. Without hesitation, Kweller proudly answers, “Mickey Mantle, 1959 Topps!” 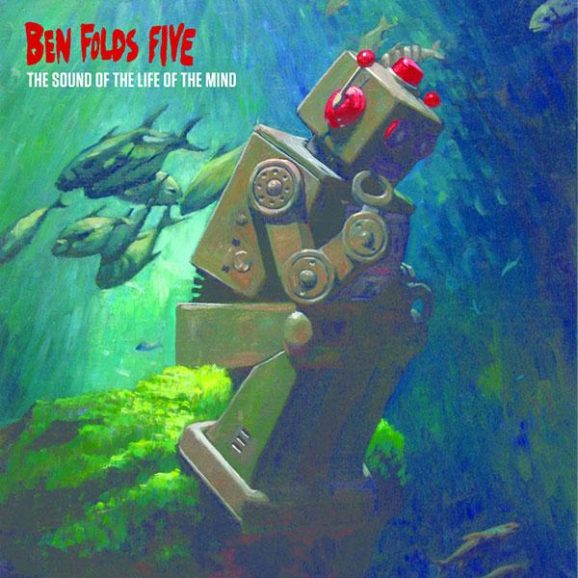 Ben Folds Five: The Sound of the Life of the Mind