Improv rockers Umphrey’s McGee have taken their annual Halloween celebration to The Tabernacle in Atlanta this year and the festivities got off to a rousing start on Friday night. The Chicago-based sextet dusted off a few covers they hadn’t played in years and unveiled the first mash-up of the two-show run.

Following the anthemic instrumental Nipple Trix in the opening slot, a 20-minute Ocean Billy set the pace for a jam-heavy first set that also saw Hurt Bird Bath surpass the 17-minute mark. In a break from the rock show antics of the rest of the set, guitarists Brendan Bayliss and Jake Cinninger broke out their acoustics for the 30db favorite Susannah and Patience off Guns N’ Roses’ Lies EP. Though Bayliss mentioned “I’ve been wanting to do this song since 7th grade. So this is dedicated to us…from me,” Umphrey’s did used to cover the song in their early days.

1348 book-ended the second set, with the opening section including a jam on Voices Inside My Head by The Police. Over the years Cinninger has teased AC/DC’s Rock and Roll Ain’t Noise Pollution numerous times, but Umphrey’s had never covered the song in its entirety until last night. Jake stayed true to Brian Johnson’s throat-y vocal delivery as he belted the lyrics of the classic rock staple. Pay The Snucka offered the guitarist yet another chance to shine as he worked the beginning of Van Halen’s Eruption into his metal solo. The classic rock theme continued in Much Obliged where the band teased Hendrix’s Voodoo Child (Slight Return) and played nearly all of Who Knows by Band of Gypsys in the middle of the jam before ending the set and 1348.

During the encore, UM  showed off the first of the traditional Halloween mash-ups during the encore by deftly mixing Bob Marley’s No Woman, No Cry with  Let It Be by The Beatles. For the start of the well-executed mash-up, referred to as No Woman, Let It Be by the band, the guitarists took turns trading verses. Brendan Bayliss sang lead on No Woman, No Cry while Jake Cinninger handled Let It Be and after six minutes they had touched upon every part of both songs. Hauntlanta concludes tonight and while the show is sold out, you can watch it live on iClips for $9.99.

Stream NSL’s recording of last night’s show or download from The Archive. 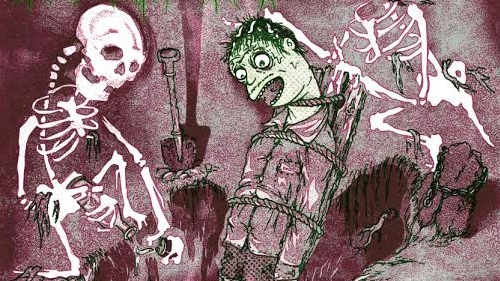