DJ Shadow announced a completely impromptu concert a few weeks back for a hometown audience in San Francisco at the legendary Fillmore Theater. The show quickly sold out; partly due to the fact that Shadow has only performed in the Bay area three times since his latest album (The Outsider) was released last fall. Following a short UK tour, he had made some appearances opening for Massive Attack a few months back, but for some reason, never kicked off a US tour to support his new album, which was definitely disappointing for fans here in the States, and made this rare San Francisco performance that much more special. Shadow grabbed the mic and commented during his set how heartened he was to finally have a chance to perform in front of his hometown audience at his own headlining concert.

Opening up for Shadow, was Portland-based emcee duo Lifesavas, who were coming fresh off the release of their new album entitled Gutterfly, which just dropped last week on the label Shadow actually co-founded, Quannum Records. Similar to what fans have come to expect from Quannum’s impressive roster of highly talented and original underground groups—Lifesavas deliver their own signature hip hop sound packed with funky beats, smooth yet hard samples and loops, and intelligent, nicely synced rhymes.

Shortly after the Lifesavas departed the stage, Shadow stepped up and grabbed the mic to greet the intensely hyped crowd. It was obvious from the overwhelming reaction from the crowd that this was DJ Shadow’s home turf.  Backed by a huge screen and perfectly synced psychedelic visuals, Shadow jumped right into what proved to be an incredibly powerful set entirely comprised of original DJ Shadow material.

The mix began with a perfectly blended fusion of “Building Steam With A Grain Of Salt” and then on into the Radiohead’esque “The Tiger”, one of the many underrated standout tracks off The Outsider. From there, Shadow got down into his set by chopping and mixing highlight tracks from all of his albums. As he cued up “Seein Thangs,” the hardcore, almost crunk track fronted by emcee David Banner on The Outsider, the rapper appeared on-screen, delivering his raw lyrical style in perfect sync with Shadow’s beats—a feat most likely accomplished by Shadow manipulating DVD turntables onstage. Bay Area rappers featured on Shadow’s hyphy track “3 Freaks,” appeared in the same manor when Shadow threw that track into the mix. Collaborator Lateef The Truthspeaker appeared midway through the set to perform a few tracks including “Enuff,” “Mashin On The Motorway,” and the incredibly funky “Lady Don’t Tek No.”

Shadow kept the crowd in rapt attention as he masterfully weaved his raw hip hop tracks with his signature dramatic and ambient soundscapes, and even threw in his straight up down and dirty funk jams into the mix—exhibiting his diversity and originality as a producer and live DJ throughout the night. Shadow’s turntable skills where properly exhibited as well as he delivered breakneck speed scratching on “The Number Song,” “Walkie Talkie,” and “Organ Donor.”

Following a more experimental encore which capped off with “Midnight In A Perfect World,” Shadow abruptly cut the music and thanked the thoroughly amped crowd for coming out. He signed off with a humble statement about how he feels he is still paying dues and learning—leaving crowd dying for more as he slinked off the stage and back into the shadows. 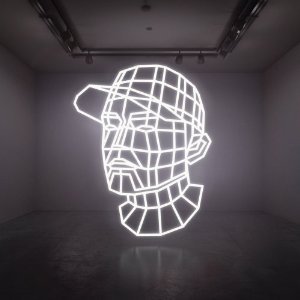