We’ve got quite a treat for you this week, as we kick off yet another new feature called Tour Diary. Our first Tour Diary comes from Umphrey’s McGee Lighting Crew Chief Wade Wilby about the band’s recently completed West Coast tour:

From the depths of the suburbs comes this blog from the UM road crew. The words come from Wade, but the experience comes from them all. The band would like to thank everyone who supported them on this tour, and all of their friends and family who stopped in to share the experience.

All photos by Matt Ziegler

O’Hare is infamous for cowering under mother nature’s pressure. February 6, the date of our departure for Winter Tour, would be no exception. Five weeks of nervous energy and anticipation played itself out in laps, as I watched the snow hammer down on Chicago all day wondering if the flight to Vancouver would ever get out on time, if at all. Our flight was one of a handful that escaped the airport, and we were off to paradise. Read on for more from Vancouver and Seattle…

According to Chronicles: Vol. 1, Bob Dylan was originally to be the recipient of the Woody Guthrie lyrics that eventually became the basis for the Billy Bragg and Wilco collaboration

You won’t find any obligatory Oscar recap here today, that’s just not our thang. Fortunately for everyone though the Academy made the right choice in the Best Original Song category,

These February days are long, cold and a little stormy, so this week’s mix is meant to lighten the mood and brighten some spirits. Essentially culled from my last month

Representative of the Midwest: Diggin’ on Wilco

Hidden Track started as a New York City-centric blog, but we’ve always aspired to bring you content from around the country. Today we’re excited to announce that we’re expanding our reach towards Middle America.

Please welcome the newest member of our team, Joel Berk, who will head up our coverage of the Midwest. You’ll be hearing about a wide range of music from our new Chicago Bureau Chief, but he’s gonna start by recapping Wilco’s Riviera run:

All of those clichés were probably used to (correctly) describe Wilco at various points of its career, but during the band’s Riviera Residency in Chicago last week, one thing became clear: Wilco is a rock band.

Over the course of five sold out evenings, Jeff Tweedy and company worked with precision through every song to appear on an official Wilco release and sprinkled in a smattering of other rarities. A daunting task as each record has a different sound and lineup. But the band rose to the challenge with an ease that can only come from being at the top of one’s game.

The current sextet is unbelievably focused and locked in as a unit. They dusted off gems like A.M.’s Dash 7 and Being There’s Hotel Arizona, making them sound as fresh and vibrant as ever. The comfort with which the current incarnation handled the older/out-of-rotation tunes was shocking at times, most notably on Monday’s Summerteeth gem, My Darling. Urging the band into unfamiliar territory, Tweedy reassured “we can do this” before introducing the song as “a lullaby” to close the second set. Read on for more including downloads from the Wilco run…

Hors D’Oeuvres: This One Time at MMW Camp

For five days in August Medeski, Martin and Wood are offering their musician fans a once-in-a-lifetime learning experience called Camp MMW. Eighty campers will gather at the Full Moon Resort 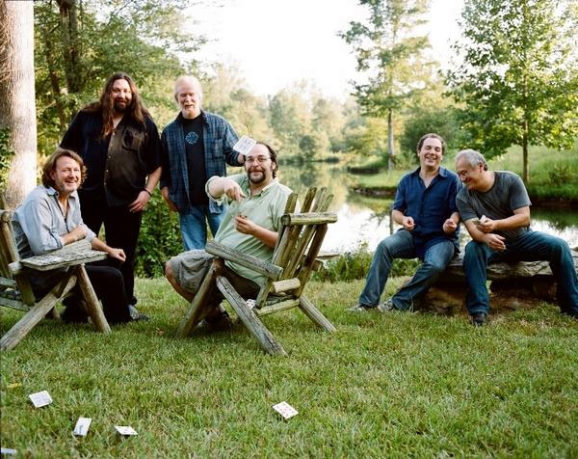 Speaking with Glide a week before the release of Widespread Panic’s tenth studio album – Free Somehow – John Bell had a chance to "tickle the truth" about a number of relevant items before getting on the road to let the new songs “grow.”

It was a "Country" made for Oscar. No Country for Old Men," the Coen brothers’ brutal tale of a man pursued by death and the law across the empty moonscapes

With his highly anticipated gigs with ex-bandmate Eric Clapton looming this week in New York, Steve Winwood has signed a new deal with Columbia Records. His label debut, "Nine Lives,"