New York City is a tough nut to crack for most bands that aren’t from the Northeast. When a group schedules a date in the Big Apple, they can be assured of competition from dozens of other acts and multiple forms of entertainment across the city. Perpetual Groove first played NYC back in 2004 and since that time they have built an audience in the city slowly and surely thanks to a number of impressive performances at area venues. The band’s hard work paid off on Friday night when they filled the Bowery Ballroom and treated the crowd to a signature “heater” of a show.

The evening started with an eclectic set of music from former Blips artists Turbine. Over the course of the band’s 45-minute performance, Turbine offered up six tunes that each showed a completely different side of their sound. War of 9161 (The Pledge) contained hints of early Genesis, the intense Columbus Days featured Ryan Rightmire laying down all sorts of layers on effects-driven harmonica while the upbeat Behind These Walls gave guitarist Jeremy Hilliard ample opportunity to wail. It isn’t often you see the harmonica used as a rhythm instrument, but Rightmire impressed with his ability to add wacked-out textures to Turbine’s originals.

Coming out strong with the anthemic No Decorations – a tune that opens their latest release, Heal – PGroove wasted no time displaying the songwriting chops that separates this band from their peers. Singer/guitarist Brock Butler sings with such conviction that when he belts “here you have a friendly ear, if you need one” you almost want to run up to him after the show to tell him your problems. It’s that connection between singer and listener that had the usually chatty NYC crowd hanging on each word.

READ ON for more thoughts and pics from PGroove in NYC…

Stormy Mondays: Ghosts of Jambands Past

It’s been a long time since we’ve had a Ghosts of Jambands Past edition of Stormy Mondays, so this week we’re looking back to August of 1999 and the best

At this point in his illustrious career, David Byrne has earned creative license to basically do what he wants in regards to putting out new music – even if the

Just a reminder that the Final Four round of our Cover Wars March Madness tournament ends this evening at 11:59PM (EDT). Be sure to get your votes in on our

Through The Fog: Stockholm Syndrome

I was barely three months old when the Million Dollar Quartet got together for a Tuesday afternoon jam at Sun studios. Carl Perkins, Elvis Presley, Johnny Cash and Jerry Lee Lewis formed modern music’s first supergroup and Sam Phillips was quick to cash in. Phillips made his living with music and knew something special when he saw it. That would explain his calling the paper and letting them send over a reporter and photographer to capture the moment for posterity.

Someone send a reporter and photographer over to see Stockholm Syndrome, pronto.

Oh, wait. That’s me. Well, let me tell you, whether or not you agree with the supergroup moniker, you should definitely seek out a Stockholm Syndrome show and capture the moment for yourself. Not that that would make my job any easier, it’s just that I see a real benefit to seeing this band live. I didn’t always feel that way. There was a time that I seriously considered NOT going to the Crystal Ballroom for this show. But, now that I’ve experienced S.S. live, I feel a lot better. Maybe I should explain.

I woke up on Monday with a serious toothache where a tooth no longer resided. According to the x-rays, there was a piece of my old wisdom tooth that was left behind 25 years or so ago that decided Monday morning was the time to break free of my jawbone and make my life miserable. Oral surgery was scheduled for the next morning in Scappoose, Oregon, some 40 miles north. I’d have driven to Mexico to relieve this pain, it was that bad. It took the surgeon a total of 11 shots to make/keep me numb along with laughing gas for the duration. I was stitched up, packed with cotton, told to keep taking pills for the pain and generally take it easy. I was home by noon and out like a light an hour after that.

I woke up hungry at about dinner time, but couldn’t eat (or see straight for that matter.) So I took more pills and parked in front of the stereo with a good book. I finished the paperback by eight thirty and considered turning in. My lower jaw was still numb to the touch. I was in sweats and my favorite old Stones tee shirt. I had already forgotten the ending of the book I just finished. There might have even been a bit of dribble on the front of said Stones shirt. I was in no shape to go anywhere.

READ ON to see how things turned out for A.J….

On March 30 neo-soul singer Erykah Badu will release her fifth studio album New Amerykah Part Two: Return of the Ankh. The album is said to be more organic and

Ashes of American Flags, Wilco’s visually and musically stunning first-ever concert film will air on Monday at 10AM on Sundance. The film follows Jeff Tweedy and company from Tulsa to 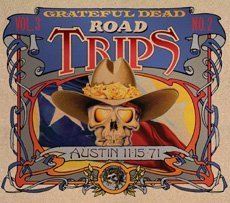 Volume 3 Number 2 is one of the best of the Grateful Dead's Road Trips and augurs well for the redefinition of this archival project. Originally conceived to highlight particular phases of the band's career, this series has more recently come to reflect its esteemed  precursor, Dick ‘s Picks, in offering complete performances from the group's history.