While most people clear out of major metropolitan areas during August, heading to large bodies of water to escape the brutal heat and humidity, some of  those left behind showed up to Wolf Trap to see Alison Krauss and Union Station and Dawes. The sold-out show took place at the stunning architectural masterpiece that is Wolf Trap Foundation for Performing Arts, just outside Washington, D.C., on one of the hottest, most humid nights of the summer.

But the thunderstorms in the afternoon and the suffocating heat did not deter concertgoers, who came prepared. The lawn was packed with picnickers: wine, cheese, artisanal sandwiches and hors d’oeuvres (no heady grilled cheeses or veggie burritos here). Many even brought their own wine glasses to avoid drinking out of the dreaded red plastic cups. It was a classy affair Sunday night at Wolf Trap. 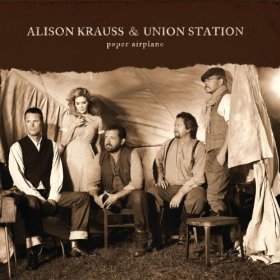 Paper Airplane, like the rest of Alison Krauss and Union Station's albums, is meant to please their diverse musical needs and equally diverse fan base.  Nothing on this album is going to satiate their fans’ desire for the old stuff, but even after seven years away from the studio, the band’s reputation as country music’s most unpredictable jukebox is intact.