The Q: Return of the Phil Lesh Quintet 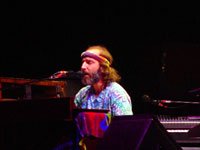 With a music career that includes extensive classical training, a Bachelors Degree in Music from the State University of New York-New Paltz, member of the house band for The Cosby Show, tours with Freddy Jackson, and ten years performing with the Zen Tricksters, Rob Barraco has now solidified himself as a vital element of Phil Lesh and Bob Weir