Kelly Hogan’s new solo album I Like To Keep Myself In Pain is slated for a release on June 5th via Anti Records. Recently touted "a national treasure" by colleague,

In the pantheon of gut wrenching, emotionally charged break up albums none may top the sheer heartbreak found throughout Bob Dylan’s 1975 release Blood On The Tracks. The album has been mined for its share of covers over the years, but it’s the first time we are actually featuring a track from what is arguably one of Dylan’s best LPs.

While there may be a few more obvious choices, we’re going with the moody album’s melancholy closing track, Buckets Of Rain. The tune, which according to Wikipedia has astonishingly only been played live once by Dylan, is as tender as it is devastating with lines such as, “Like your smile, and your fingertips. Like the way that you move your lips, I like the cool way you look at me. Everything about you is bringing me misery.”

Before hitting it big on his own, M. Ward was a member of Beth Orton’s touring band. The duo’s version finds Orton and Ward trading off on the verses, which was released as the B-side for the digital single of Heart Of Soul, a track that Ward co-wrote with Orton for her 2006 album Comfort Of Strangers

READ ON for more covers of Buckets Of Rain from the likes of Neko Case, David Gray, Vic Chesnutt and more…

[Thanks to sonicsound for this week’s photo]

“You should have heard him just around midnight”. A few covers, an acoustic section and a fan requested bustout of Strangefolk’s Far From Yourself round out this New Year’s show from Reid Genauer and Assembly of Dust. Reid hits the road again solo for a few shows to start 2010. Catching him solo is highly recommended, I’ve said it before, Reid is one of the best screamers of our generation.

READ ON to hear highlights from many other bands New Year’s Eve shows.

A band that is unfortunately no stranger to loss, having lost their very own Mikey Houser back in 2002, Widespread Panic faced a heart wrenching confrontation at their Phillips Arena 2009 New Years run; to play their hearts out for fallen comrade Vic Chesnutt.

The band did just that over the course of three sets at the Atlanta venue (home of 9 of their last 10 New Year’s shows), bookending the eulogy show with Chesnutt material including opening up with Vic’s Let’s Get Down to Business and closing down shop with his Protein Drink/Sewing Machine.

Sandwiched in between Vic’s nuts, Panic treated fans to: an acoustic first set, a smoking tribute to that other pop star who died in 2009 (at midnight), a sarcastic Another One Bites the Dust tease in Arleen, a brassy horn cavalcade courtesy of the Megablasters, a crack at Van Morrison’s Moondance, and a Patsy Cline nod in Walkin’ After Midnight.

With the stakes high on behalf of their fallen friend, Widespread Panic came out and raised them even higher. On a special night with emotions running wild, the final set Widespread Panic played for the aught decade (third set), may also be one of their very best according to many fans.

READ ON for a full setlist and downloads.

On Friday, we brought you the rather sad news of the passing of singer-songwriter Vic Chesnutt who died at the all too young age of 45. Chesnutt’s name is familiar

In general, when I arrive at a show and learn that I am walking in on an opening act that I was not aware of – I’m not very pleased. I had a timeline in my head of what I thought set times were going to be and realized that now, all of a sudden, every thing had been pushed back an hour. Sunday night however, it only took about five minutes for me to realize that I was going to be catching a great set of music from Clare & The Reasons, a band I had never heard of – in fact I did not know the name of the group until after their set was over and I swung by the merch table.

Clare & The Reasons touring band are a quartet, fronted by Clare Manchon and all four musicians are multi-instrumentalists. There was fiddle, trombone, clarinet, keyboards, guitars and basses constantly being passed around amongst all the members of the band, and while there was no percussionist…Clare had a foot-tambourine setup that added a little extra punch in the choruses of some songs.

They played the majority of their brand new album Arrow including the first-ever performance of the “Japanese Bonus Track”. As her set came to a close, Manchon announced that “You will all know this song” and launched into a great arrangement of That’s All (which is also on the album Arrow). With the signature piano line being played on a clarinet, the crowd – of unfortunately only dozens of people – let out an audible laugh and Clare quickly explained, “It’s not funny” into the microphone. This band is opening for Vic Chesnutt through November 7th, I highly recommend arriving early to check them out. Manchon’s gentle voice is a perfect fit for their type of music which borders somewhere between Twee Pop and gypsy street musicians. As my friend Indie Dan said, “Even though there wasn’t an accordion onstage, I totally could see them having one.”

Here is their music video for the song All The Wine:

Ever since recovering from a bout of Hepatitis C in 2008, Gregg Allman has shown no signs of slowing down since returning to the road. After the star-studded Allman Brothers

Saturday night I went and saw Vic Chesnutt & Elf Power at the Middle East upstairs in Cambridge. I’ve got a friend who I now call “Indie Dan” that is constantly throwing new bands my direction. After the fourth time he bugged me about going to this show I gave a listen to the 2008 release Dark Developments

from this combo and decided to go. Good thing I bought my ticket in advance because these Athens, Georgia indie dudes sold it out day-of-show. In fact the hand-written piece of paper read, “TONIGHT’S SHOW IS SOLD OUT FOR REAL”.

Chesnutt, from his wheelchair which he is bound to after a car accident, had an abrasive but playful interaction with the crowd all night as he explained the meanings behind some of his songs and humorously turned down song requests. Especially comical was his explanation that a song titled Teddy Bear was in his words “About fucking…”. No, it wasn’t about fucking a teddy bear. Three songs into his set, Chesnutt confirmed what I had thought was going on: That they were playing Dark Developments in its entirety. Chesnutt’s low and somewhat raspy voice sounded as good live as it does in the studio.

Here’s some video from a show last year at the Santa Fe Brewing Company: 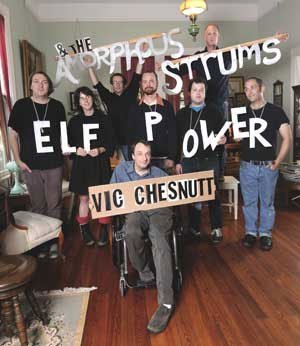 Having recorded albums with Widespread Panic, Bill Frissell and Lambchop as his backing bands, Vic Chesnutt is no stranger to collaborations. He’s also no stranger to revealing his complicated view of the world through a chaste vulnerability that reveals un-hesitated pain and insecurities. Dark Developments, his most recent collaboration with fellow Athens, GA and Elephant 6 members Elf Power, transforms his dark lyrics amidst pop melodies that shine the artist in a new dimension. 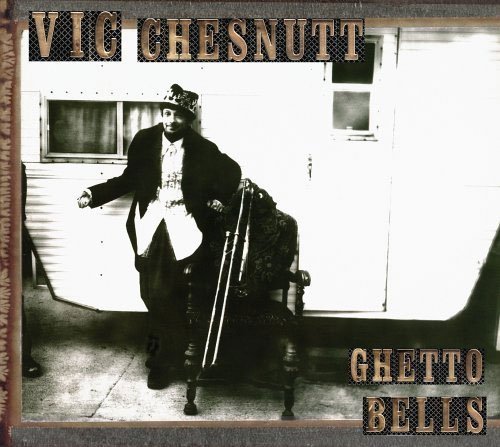 Bone dry and delicately woven; the web that Vic Chesnutt has created throughout his humble career has spawned by a humorous eye, evoking the beauty of the South in wry, often bazaar imagery that is nothing short of genius. Ghetto Bells, an intricate, 11-song tapestry of color and depth, accented by multi-instrumentalist Van Dyke Parks and jazz guitarist Bill Frisell among others.