It was a day filled with genre-film fun and lots of Christmas cheer (no, really) at the kickoff day for Fantastic Fest 2015. People from all over the world crowded together in and around the theater’s lobby to wait out the collective interims between everyone’s own personal viewing marathon. Day one’s marathon, for me, consisted of demonic horror, stargazing dystopia, a Civil War-era thriller, and a vampire/crime/kung fu mashup (all in that order).

Here’s a look at how each of these four movies stacked up.

The kind of film where each frame is itself a work of art, and finds terror in the plain surroundings of everyday life. Writer/Director Osgood Perkins has created a film akin to watching an artist throw what look like random splashes of paint on a canvas, only to rotate it slightly, suddenly revealing more than a collection of beautiful brushstrokes, but a perfectly realized portrait.

The thing about February, is that it does this to you a few times during the movie, so by the end you’re back where it started, but your perspective on everything you see could not be more different. Easily comparable to one part The Exorcist and four parts The Shining, particularly where the soundtrack is concerned, Perkins elevates his medium by utilizing every aspect to the fullest, a horror film where the horror (for the most part) lingers in the margins, and leaves just enough untold to leave you unsettled.

One of the prestigious entries to Fantastic Fest this year, Colin Farrell, looking a lot like a suburban Richard Harrow, checks himself into The Hotel, tasked with finding a mate or being surgically transformed into an animal is portrayed with a kind of quirky, candy-coating dystopia. One that eludes to a world much worse off than what we’re shown.

The premise adds another layer by introducing a group of outliers called “loners,” whose assumed free-spirited lifestyle is portrayed with the same extremism, albeit on the opposite extreme. It’s a thoughtful, charming approach to the subject of how we, as humans, find those to love in our life, and while it’s unquestionably hysterical, it has the ability to tug at your heart-strings and punch you in the stomach, and doesn’t hesitate to do both. Co-writer/director Yorgos Lanthimos lets his movie do it all at the same time.

A grim, gothic tale set in the immediate aftermath of The Civil War, it focuses on two sisters and their slave as they find themselves terrorized by two Union soldiers. A pre-apocalyptic sense hangs heavy in the air, while Augusta (Brit Marling) wonders if the world has already ended, it soon becomes clear the worst has yet to arrive. The sense of increasingly desperate isolation looms large throughout, as each shot from a gun pierces the silence like a roll of thunder.

While it could have sufficed as a tension-filled historical thriller, Julia Hart’s debut script lets it be a character study, a musing on war, and an unflinching portrait of a country in shambles with no law or social contract in place. “There are many kinds of monsters in this world,” warns Maddie (a dynamic Muna Otaru), “you don’t know which one is gon’ be yours.”

Worth noting, this opens today, September 25th, in select cities. If you’re living in one of the select cities, go see it. If not, drive to one, then go see it.

Takashi Miike’s latest installment is too cartoonish to be brutal, but too savage to be comedic, but a deliberately over-indulgent genre mashup that oftentimes borders on Fellini in terms of pure absurdism. A well-liked yakuza boss Kamiura, who was secretly a vampire, is struck down for deserting the syndicate. His assistant, Kageyama, rises up to take revenge — after being bitten by his old boss’ severed head.

Of course, this all works well enough, provided you know what you’re in for. The movie would be a hard sell to anyone not at least slightly familiar with Miike’s work, and even some fans might consider this too campy. Any casual viewer not put off by the turtle/guy thing would certainly have a hard time dealing with a giant, invincible plush frog that does stuff like this: 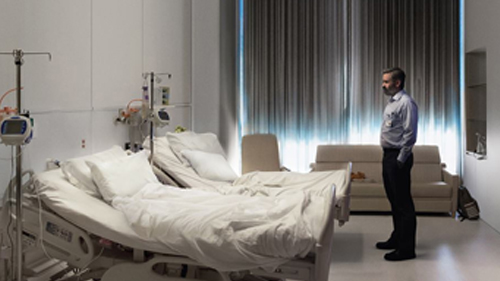