While Fantastic Fest is best known for shining the spotlight on some of the less-conventional corners of the cinematic landscape, it’s never shied away from featuring mainstream movies that tell their own unique tale. This year, the Amy Adams alien encounter movie Arrival is featured, as is the inverted monster movie Colossal, starring Anne Hathaway and Jason Sudeikis.

However, one of the films that stood out on the roster this year was Tim Burton’s Miss Pelegrine’s Home For Peculiar Children. In conjunction of the film’s Fantastic Fest debut, the mayor of Austin Texas, Steve Adler, proclaimed September 25th, 2016, to be “Keep Austin Peculiar Day,” a way of honoring the massive cultural impact of the former Disney animator whose own brand of off-kilter, playfully morbid sensibility has influenced anyone with an imagination for almost 30 years.

The director himself was in attendance, who humbly thanked the city for its continued support over the years, while reminding the city that it didn’t need his help to stay peculiar.

The movie is adapted from Ransom Rigg’s book of the same name, which Burton described as something he’d “wished he’d written himself,” before shrugging and adding simply that “he didn’t.”

Given that the plot is about a school for children who are considerably different than the “normal” people around him, Miss Peregrine has drawn comparisons to both the X-Men and Harry Potter series. Despite the comparisons, Burton is cautious about it becoming another movie franchise. “There’s a new superhero movie coming out every week,” Burton said, “so there’s plenty of other people [doing that]. I did it a long time ago, and it was fun and I loved it, but there’s enough out there.”

You’ll have to wait until Friday for our full review of Burton’s latest movie, but he does have a blink-and-you’ll-miss-it cameo, something he said was done “out of necessity.”

“Getting shots where we had no money, crew, or permits, I got kicked off the pier a few times,” he joked.

You can see his entire acceptance speech below, (mostly) complete with an introduction by Austin resident Robert Rodriguez. 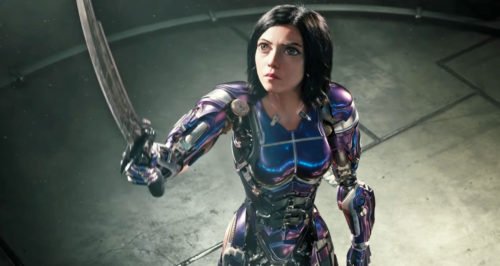 ‘Alita: Battle Angel’ a Flawed But Stunning Blast of a Movie (FILM REVIEW)

SXSW: It Turns Out, There Is A Wes Anderson Movie That Bill Murray Would Turn Down