It’s difficult to conceive that Better Call Saul will ever get better than they did with “Bagman.” It was the apotheosis of everything that makes this series so compelling and so delicious distilled into a single, unforgettable hour of television that exceeds every bar the series ever set for itself in addition to every bar ever set by its predecessor, Breaking Bad. It was television perfection achieved only the way that Vince Gilligan, who also directed last night’s episode, can achieve it.

Gilligan has always been great at the kind of self-contained but entirely consequential narratives seen in “Bagman.” The Breaking Bad episodes “Fly” and “4 Days Out” come to mind, as does “Drive,” an episode of The X-Files written by Gilligan and starring a pre-Malcolm in the Middle Bryan Cranston. Of his many talents, Gilligan is best when he’s telling stories like this and this was the best he’s ever been.

It was the perfect metaphor for Jimmy’s fall, a sort of “Last Temptation of McGill” that finds our hero fully succumbing to the demons that tempt and taunt him into a life of sin. Each step he took through that endless desert was a step away from any decency that Jimmy might have held and towards the indecent, salacious world of Saul Goodman. We know now that there’s nothing Jimmy won’t do in the pursuit of Saul Goodman, whether it’s drink his own piss or lure someone to their murder.

Like so many of Jimmy’s schemes, this one started out simple enough. For $100,000, he would drive to a remote location in the middle of the New Mexico desert, pick up the $7 million Lalo needs to make bail, and drive back. He’d be back before Kim was home from work, there’s nothing to worry about it. This, of course, showcases Jimmy’s central problem: shortsightedness. The lure of the money is always too strong and it shines so bright that he’s blinded to potential problems. And with $7 million from the cartel at stake, the potential for problems is high. 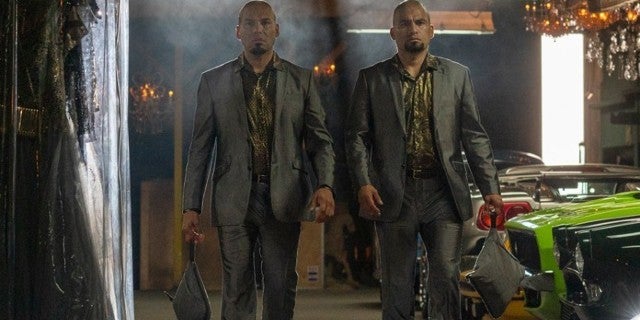 One does wonder why the cartel wouldn’t offer some sort of protection for their investment; that’s a lot of money they’re entrusting to a lawyer they don’t know driving a car that, even in the best of circumstances, isn’t known for its reliability. Good as it was to see the cousins again, you could sense the problems looming on the horizon as soon as they turned around and left Jimmy on his own. And what followed was one of the tensest moments in the history of the series.

What’s truly amazing is how Gilligan and Peter Gould are able to build tension even in moments whose outcome is preordained. We know that Jimmy was never in any danger of being killed out there in the desert because we know that he’s destined to eventually meet Walter White and even later become Gene in Nebraska. And yet, it was hard not to worry about him as he was ambushed by members of a rival cartel.

It was a scene reminiscent of “To’hajiilee” or “Ozymandias,” with the desert backdrop and intense shooting, certainly unlike the majority of Better Call Saul. But it truly speaks to the danger that Jimmy has walked willingly into. He’s so busy playing his angles that he doesn’t ever stop to consider what other angles there might be. This is a problem we know he continues to have, given how willingly he gets into bed with Walter White in just a few short years.

And, as always, he needs someone to bail him out. Given how invested Gus Fring has been in his war with Lalo, and how many strings he’s pulled so far, it wasn’t really that surprising to find that Jimmy had a guardian angel in the form of Mike, who took out the assailants and, unfortunately, shot the alternator on Jimmy’s Esteem with a sniper rifle. They’ve always been such a perfectly mismatched pair, and it’s been disappointing as they’ve drifted apart narratively over the last few seasons. Seeing them together again, regardless the circumstances, was truly a treat. 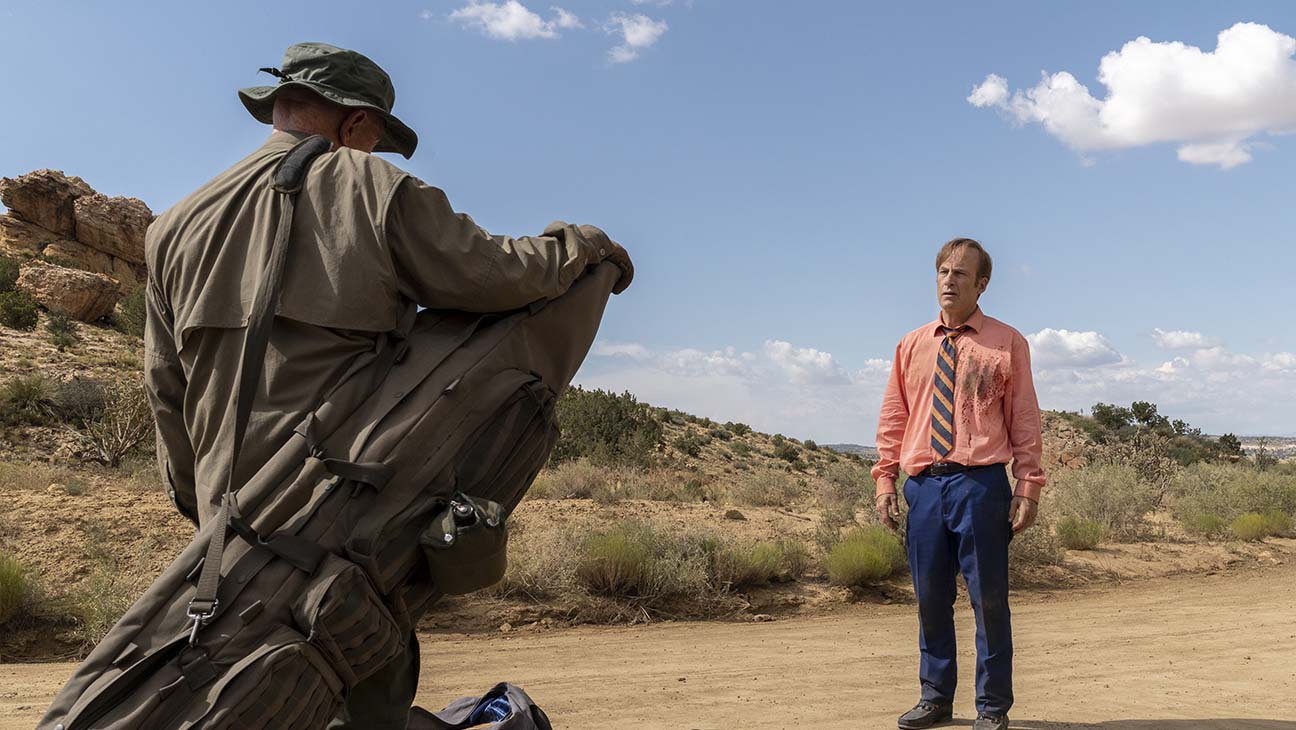 Mike’s character has always been summed up best by a speech he made to Walter in Breaking Bad. “I chose a half measure when I should have gone all the way. I’ll never make that mistake again.” As we’ve seen, Mike either goes the distance or he doesn’t go at all. Jimmy, on the other hand, is a man for whom shortcuts and half measures are a way of life, as evidenced by how quickly Jimmy is willing to start dragging the bags of cash through the desert instead of carrying them which, as we all probably foresaw, eventually led to the bags ripping.

Not that I blame him. Walking for two days straight in the middle of the desert was never going to be easy, and $7 million isn’t exactly light. Still, there was something poetic about watching Jimmy run through the desert picking up stray bits of cash while a mysterious enemy stalked them in the distance. Finally, at a breaking point, and prepared even to take a swig of the jar of piss he’d been carrying for hours, Jimmy stood up, and made himself known.

It was as close to selfless as Jimmy’s been in some time, even if he did it for ultimately selfish reasons. Announcing his presence as he did, wrapped up in a space blanket so similar to his brother’s, allowed make to finally get a bead on their pursuer, and finally put an end to their days-long chase through the desert.

It was the fire the cleansed his soul of Jimmy and allowed for Saul to truly become known. Saul crosses lines that Jimmy dares not. Saul does what it takes while Jimmy does what he can. Jimmy’s actions, life saving though they were, led directly to a murder, taking him as far across the line as he’s ever been, but at least offering he and Mike a somewhat safer trek out of the desert and back into civilization. 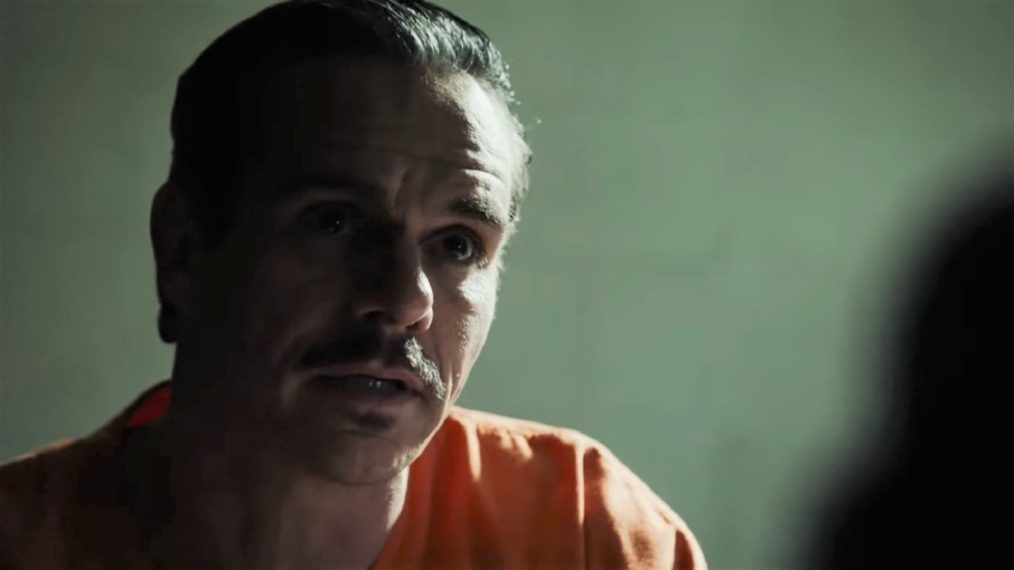 And even with all of that, somehow the most consequential moment came from Kim. Rightly terrified when her new husband did not, in fact, beat her home from work, she pays a visit to Lalo, representing herself as a member of his defense to the guards in lock up. Now, Lalo knows his lawyer has a wife. Now Lalo knows how to really push Saul’s buttons. It was a meeting fraught with suggestion—is this what happens to Kim? does the cartel attack her to get to Jimmy?—and it’s now somehow even harder to not be scared for her ultimate well-being.

It was a short scene, cutting the episode into two distinct parts, but the air of uncertainty swirling around her definitely has a new sense of potential danger, a danger that neither she nor Jimmy could have foresaw, even if they probably should have. Now, with only two episodes left in the penultimate season of Better Call Saul, the fates of everyone are hanging in the balance and where we go from here is increasingly unclear.