It’s been raining for about three straight days here in New York, and I’m starting to think I’ve been cast as Margot in Bradbury’s All Summer in a Day. The

In the 10 months since our inception we’ve received albums from many artists, but none of them have caught my ear like New Monsoon’s latest release, V.

I’d really never heard New Monsoon’s music before listening to the album, but after one listen I grew most intrigued. What particularly struck me was the variety amongst the tracks, as each song seemed to be cut from a completely different fabric from the last. Some of the tunes on V are incredibly catchy, as I just can’t get Copper Mine out of my head. Legendary producer John Cutler of Grateful Dead fame produced, mixed and engineered the new album.

New Monsoon came into existence in 1998 when Penn State classmates Jeff Miller and Bo Carper reconnected in San Francisco. For the last few years the band has been extending its fan base further and further thanks to their dynamic live shows and multiple festival appearances each year. Miller was kind enough to answer a few questions for us about the V release:

Scott Bernstein: The first two tunes on the album have completely different sounds. Was that your plan?

Jeff Miller: It wasn’t necessarily “the plan,” but it seemed to be a great way to start the record. We wanted the first two songs to grab you and set you up for the rest of the record. We had compiled many different versions of the song order and felt these two tunes were best first.

SB: Did the songs on V develop in the studio or on the road?

JM: The songs developed mostly on the road. Our intention was to make a record of the the songs we felt were “road tested” but had yet to be given the proper studio treatment. It was a thrill to get inside these songs in the studio and make them sound how we envisioned them. I think we accomplished that.

Well then, you’re in luck: New fall tour dates are rolling in to Hidden Track Headquarters faster than a Joba fastball, and many of these tours are requiring hefty amounts 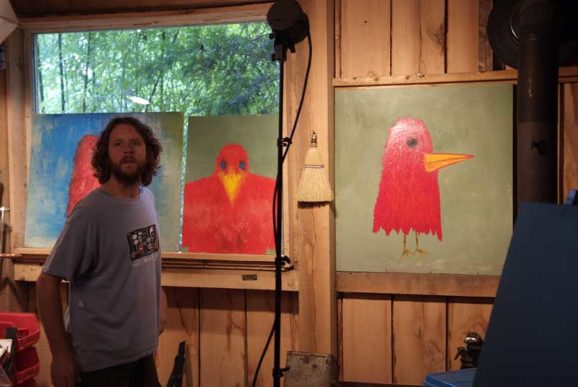 This is the first of a series of orginal artwork by drummer Billy Martin. All pieces are framed, and available for purchase online. For details, please visit Billy's gallery at http://www.billymartin.net/gallery/new/works_paper.htm

Elvis Costello will be serving as the opening act for Bob Dylan’s upcoming fall tour.  The two Rock and Roll Hall of Famers kick things off Sept. 22 in Duluth,

The Hold Steady are set to embark on a US tour, presented by NME. The ‘NME Rock N Roll Riot Tour 2007’ will see the Brooklyn band lead the jaunt

In what just may be the collaboration of 2007, legendary musician, songwriter and producer Booker T. Jones has joined forces with Texas-born singer/performer and Shortlist nominee Jolie Holland for a

State Radio is set to release Year Of The Crow a follow up to their debut Us Against The Crown on their Ruffshod label. The new album will be available